When I open the FM Radio app on my new Android Moto X4, it asks me for permission to use the microphone.

I realize that apps often require permissions for use in ways that one might not expect, and I would have assumed it was for voice control or such, but the explanation the app provided sounds unlikely and suspicious: 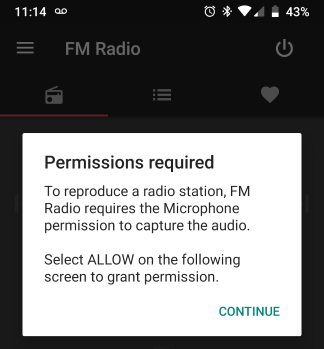 Am I to believe that the application uses the microphone to quietly/internally record the audio of the FM Station I want to listen to, and then plays me back the third-hand recording?

Even if there’s a feature to “pause” live radio, microphones only record audible sounds, right?! Plus, wouldn’t it be recording ambient noise “on top” of the radio audio?

I had an old android that needed to have headphones connected for the FM Radio app for work, but that was because it used the extra length of wire as an cheater’s FM antenna.

This doesn’t make sense to me and couldn’t get anywhere on Google (making me even more suspicious) with this so I was hoping someone here might have some insight.