At the back of the Tomb of Annihilation book, in Appendix B, there is a random encounters table for Wilderness Encounters on pp. 194-195. The different terrains listed in that table are as follows:

So that’s 9 different terrains in total.

Looking at the map on p. 39, there doesn’t appear to be any legend for describing the different terrains. The only key is as follows, and only shows what the lesser and greater Undead territories look like*: 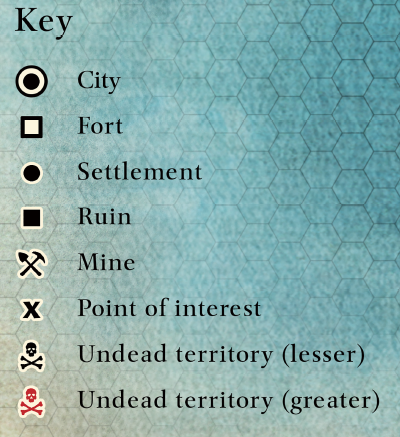 The only descriptions I can find in the books are on p. 38, which lists the different terrains under the Travel Distances and Navigation sections but does not expand on how to identify these areas on the map, and on p. 40, which is just the section Undead Territory, which only explains the undead territory as per the above key.

From the map itself, a lot of it is obvious; where the map shows a lot of trees, clearly that’s Jungle, and for hexes that intersect mountains, clearly that’s Mountain, etc. However, Ruins, Swamp and Wasteland are quite ambiguous to me with only the map to go on.

So is there any way to determine these terrains besides just eyeballing the map, and how am I supposed to identify Ruins, Swamp, or Wasteland from the map (if eyeballing really is the only way)?

Below I have attempted to identify each of the 9 different terrains from the map, as well as my best guess as to what they are (some are obvious, others less so, hence my question):