I’ve got a small desktop application that scans music folders and randomly chooses an album to play. The first version is WinForms and has “previous” and “next” buttons next, to the album art, that are activated when there are more albums by the same artist. 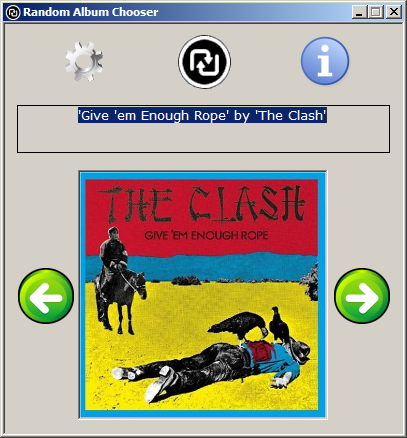 I’m not happy with this UI as the buttons take up too much space.

I’m rewriting the application using WPF and I’m looking for a better way of indicating that there are other albums by the same artist. I’ve experimented with displaying the buttons on top of the cover art and only showing them when the mouse rolls over their position but I’m not happy with the result primarily because there’s no indication that the options are there.

I found a neat trick on Brian Stevens Photography site where the cursor changes to “+” and “-” over each half of the image to indicate navigation, but I also use a click on the image to play that album so I’d have to adapt this approach if I wanted to use it myself.

Is there a better way or is a carousel or coverflow control the way to go with this?

For a bit more background read this blog post of mine.