I came up with my own subclass. I modeled it slightly after the Circle of the Moon, which is why I’m specifically asking for comparison to it. Well, here it is.

Once there was a dark elf, he had had his heart set on joining a druid circle. All of those circles shunned him. He started his own circle. The circle of shadows.

“The shadow didn’t consume me; I consumed the shadow.”

Starting at 2nd level, when you use wild shape, you can transform into a Shadow. You also learn the Umbraturgy cantrip. Finally, you gain darkvision for 60ft, if you already had it, it increases by 60ft.

“The shadow moves with me; we are becoming one.”

Starting at 6th level, your attacks in regular form and beast from are considered magical for the purpose of overcoming resistance and immunity, in addition, you can spend a spell slot and enhance a weapon. The weapon you enhanced does an extra 1d4 necrotic damage on a hit per level of expanded spell slot.

“The shadow climbs into my soul, second by second it reaches more.”

At 14th level, when you use wild shape, you can transom into a wraith. You gain the benefits of shadow enhanced strikes while in this form.

“I join hands with my shadow we sing songs of praise to the darkness that is inside me. and the darkness the he is made of. I am one with the shadow.”

At 14th level, you now can expand a spell slot to gain a hovering speed but can hover no more than 5ft off the ground. The hovering speed equals the level of the spell slot spend times 10 (1st level = 10ft 2nd level = 20ft etc.) In addition, you can cast the invisibility spell (lowest level) at will, but you must be in dim light or darkness. 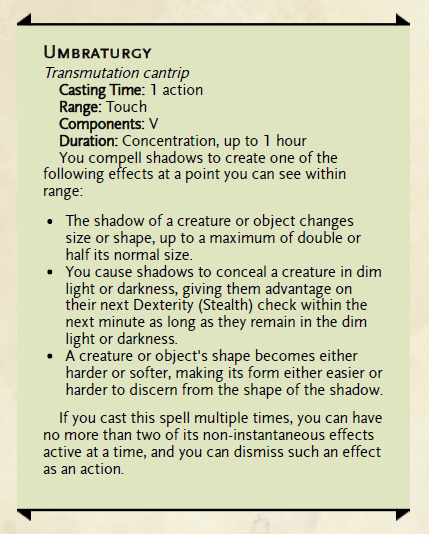