I’ve created a “poke” functionality for a social networking web app I maintain. I need help in presenting this feature to my users in the most intuitive way possible.

A user can poke another user. The pokee can reply via poking back. A pair of users can keep on poking each other for as long as they want.

Every poke has privacy settings. I.e. a user can also poke someone anonymously. I.e. anonymized notifications are generated. Poke privacy isn’t an arbitrary feature; it’s based on user feedback and behaviour.

Moreover, once A has poked B, and B has poked A back, I allow this pair of users to create a private chat room which has its own special features. This chat room persists in perpetuity. Users can keep on poking each other after it’s created. 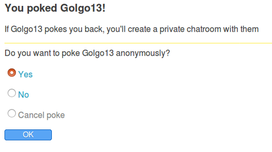 And here’s what the pokee sees when they respond with a poke of their own:

These two users can now enter a private chatroom if they want.

And moreover, if the user who was poked last continues the poking interaction, they always get the option of redirecting to the private chatroom already created: 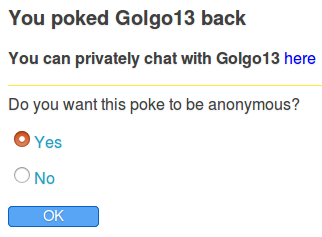 Pardon the roughness of the wireframes and copy – it’s unfinished.

I feel confusion is sown because there are three things going on here. i) The poke itself, ii) whether a private chatroom has been created or not, iii) what privacy level to set.

Overall, I’m trying to utilize the poking functionality in a tinder-like way to create private chatrooms. However, it gets conceptually complicated because I allow users to poke in perpetuity afterwards. Moreover, I allow privacy settings on each poke.

How do I make this flow more intuitive/concise without a ton of compromise?