I am designing an application that allows the users to train at home.

I have a step (let’s call it step 1) in which the user must be in a position in order to “sync” (step 2) with the app for the upcoming exercises. During that sync period (step 2) the user must move his body or simply move – the way he must move being presented through a video on the screen.

Let’s say the screen looks like this, with a title, a picture of the position the user must take and a small description. The call to action must again remind the user that he has to be in a position – in the example I used a general CTA.

Once the user the “CTA” button, the user proceeds to step 2. The step 2 screen looks similar to the step 1 screen, with the image being replaced by a video and the lack of a button. Once the sync is ready the user is prompted by a message (success or failure). 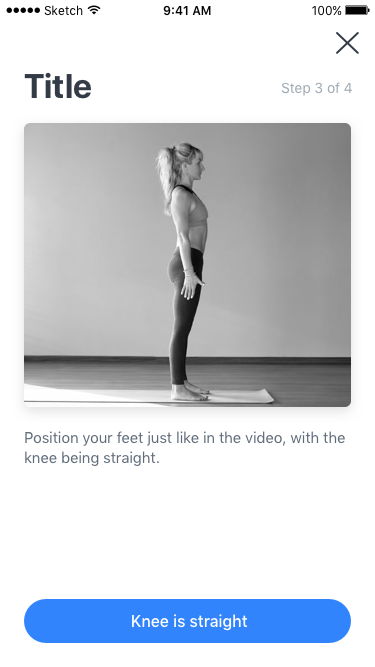 Already tried: moving the video, along with the initial position, to step 1 so he can preview what he is supposed to do. Sometimes the users will start performing in step 1 and they get tired and complain that the sync does not happen.

I am looking for any possible solution that would make the process easier and solve the problem.

Possible solution: I thought about this while writing this. When the user gets to step 2, inform him of what he has to do and add a big countdown when he can begin to perform that movement/action? Maybe during that countdown he can get prepared.