You can mimic the speech of another person or the sounds made by other creatures. You must have heard the person speaking. or heard the creature make the sound, for at least 1 minute.

If a player learns this feat at 8th level, can they mimic speech they heard back when they were first level and did not have the feat?

What about a speech heard 200 years ago when they were but a small elven child?

RAW, I think it’s allowed. And I don’t think it breaks the game to allow it. But I’m curious if there are any aspects of this that I’m missing. I would assume that for the 200-year old speech, that it would at least have to have been memorable in some way! 🙂

I have a player in my game I’ll call “Joe” running a Bard I’ll call “Hansel.”

Hansel has the Actor feat, and does not speak Orc. Hansel listened to an Orc for 1 minute a few adventures ago, a 2nd PC taught Hansel one short Orc phrase, and I allowed Hansel to repeat the new phrase, in Orc, mimicking the voice of the Orc Hansel had just listened to.

Joe has recently expanded this to insist that if the 2nd character now says several Orc phrases over the course of a minute, Hansel can repeat each phrase at will, mimicking the voice of that Orc. Joe believes that Hansel can also rearrange the words to create new phrases, on the fly in conversation with Orcs – and that this can also fool any Orc into thinking it is an Orc from their own War Band, so long as there is a door there to muffle the sound.

Joe claims that anything short of meeting this demand undermines the entire usefulness of the Actor feat, and therefore robs his character of 4 levels worth of adventuring.

Can the Actor feat allow a character to effectively speak a language they don’t know?

I think Hansel could mimic a specific Orc’s voice, after 60 sequential seconds of listening to it speak consistently (though not necessarily persistently), but only using languages Hansel already knows.

Could anyone explain the difference/correlation between the Actor model and Reactive programming?

It seems that they are located at different levels of abstraction – one can design the interaction between the components of any distributed system using Actor approach, they would send messages, and inside the actors, write code in reactive style?

this question related to How do Functional Reactive Programming and the Actor model relate to each other?

However, the answers wasn’t clear enough, and my question relates reactive programming in general, not FRP in particular.

I am trying to do the top down project from scratch.

I can already get the actor to move toward the mouse click:

Only I need to keep clicking several times to change its path and keep walking indefinitely.

I would like to know how to keep it moving while I hold the mouse button.

In the previous version (4.21) this code below fit perfectly, so I managed to do that (the condition was a variable that only became false when I released the mouse button): 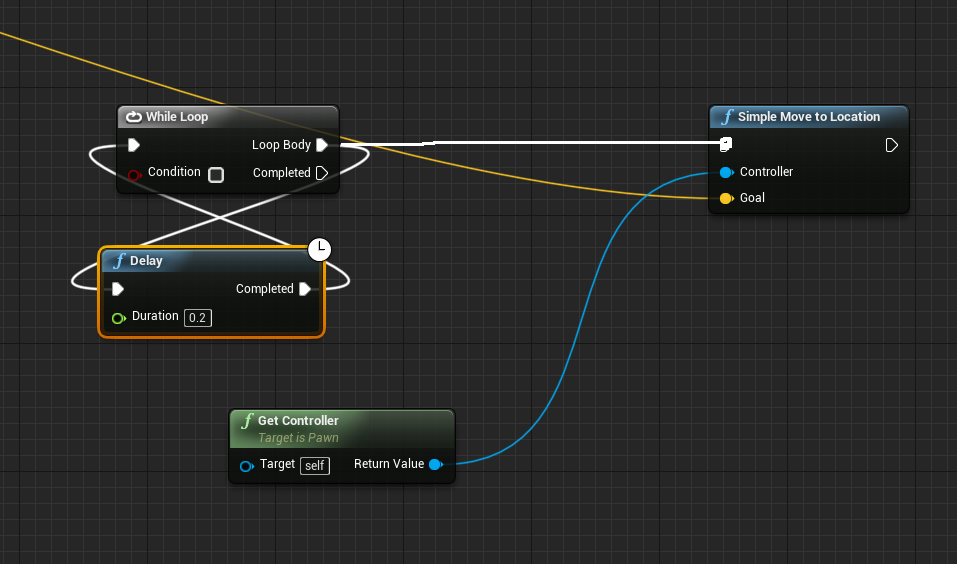 I searched for some functions and even searched the new documentation for this loop (While Loop), but nothing worked.

I am new to Akka, so not sure if this is an easy question. My current setup is something like this : I have a Rest Controller, which is getting lots of requests from different hosts. These requests then get queued into a common queue. From where they are dequeued by 4 worker threads. As the scale increased, this model started failing. Instead of creating and managing these threads and queue, I want to replace it with Akka model.

In the new model, I will have a RootActor, which will have different child actors based on type of request. Now where I am currently struggling is how to ‘send message’ to RootActor, whenever the RestController receive requests. In short, I am trying to interact with RootActor from outside of the ActorSystem. Couple of ideas which I thought about :

Is there any other standard way to do this? As much as I searched, couldn’t find anything like this (which is suggesting I’m approaching the problem in the wrong way?). Any helpful links or design practices would be great. Thanks in advance!

What is the best way to represent two actors, of which sometimes it could be the same person?

I have a case where we have approver 1 and approver 2. In most instances, #1 approves and it flows to #2. In other instances, #1 and #2 are the same person, so they can act as both.

I tried drawing a box around the two actor icons.

How can I define cross-cutting concerns like Auditing system, logging system, etc in ACTOR DDD reactive system? When you identify the actor how do you define those subsystems with the whole system?

For me, it’s After Earth. I love Will Smith, but that was a truly awful movie.

Being a complete noob to the actor model way of doing things, I a struggling to understand how I would store transaction history in an Actor Model. In the example from ProtoActor Persistence (https://github.com/AsynkronIT/protoactor-dotnet/blob/dev/examples/Persistence/Persistence/Program.cs) the child actor produces a bunch of random names like this:

And the parent then updates it’s state like this:

The question is, in an actor model, how should I store and retrieve a list of the previously generated names to display to the user.

Do I just store them in a separate database table? That seems a bit wasteful because I have already stored the events in the Event Store. So then should I use the Event Store as the journal? That also feels like I am mixing concerns of the events.

Another way of asking this: If I have a bank account modeled as an actor, how should I store the transaction history so that I can show it in the UI and not just the current balance?

Here's a tough question: Who's the best actor that ever played in an action movie? Stallone? Schwarzenegger? Bruce Lee? (…)