My enterprise would like to make some mass mailing to their customers, using a third party solution (e.g.: sendinblue, sendgrid, mailchimp…).

Is there a real risk that my domain mail address could be considered as spam if the shared IP is badly used by one of the shared service’s evil customers (e.g., for spamming, even just for a week)?

In the worst case, would every mail sent under this enterprise domain name be considered by the security solutions as some spam (iron point, proofpoint…) and blocked?

In such scenario, how long it could take to be back a good mail reputation?

can someone explain to me why a turing machine that adds two binary numbers is undecidable? I understand why something is undecidable but I get lost in trying to explain the proof behind it. Thanks!

In a VTM 20th campaign I’m playing a Ventrue vampire that is a modern age blacksmith, he have an architect nature and crafting is his life.

Now, he really likes to craft weapons, mainly swords, and he’s also good at using then in combat. But recently I started to look into ways to make his crafts more powerful, and speaking with my DM he said that he remembered seeing some thing about magical crafting in the Demon: the fallen system, and as my character is contracted with a demon and knows dark thaumaturgy (path of fire), he could learn it.

But searching in all books from the World of Darkness series I only found the special effect in crafting from the higher levels of potence (6 and 7) but nothing on the DTF system, does anyone know where I can find it or if there are any other ways of enhancing his craft?

I think it is true but I can’t think of a proof. Any ideas on how to start proving it?

I think I might know the answer to this, but I am not totally sure.

My character has a strength of 7 (-2) and a current proficiency bonus of (+2). I have a proficiency in Athletics.

Adding all this information together, should I add the Strength negative modifier to the proficiency bonus for a total skill check modifier of (+0)?

Here is an example problem which I have having trouble figuring out. The red text is the answer. 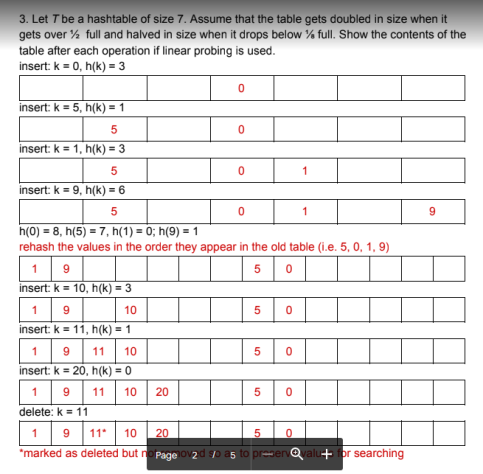 I get how the values are added before the hashtable is resized… that is common sense. (Insert 0 at index 3, 5 at index 1, etc.)

Any help would be appreciated.

We currently have a global photography website located at https://phmuseum.com. We will be adding a physical location, school/events space in Bologna, Italy this year. We will be targeting the services this physical location mainly to local Italians but also a lesser extent Europeans and Globally.

We will create a microsite for bookings and promoting this space in Italian and English.

What would the best route to take in terms of targeting and SEO to add this website to our current offering? As I see it there are a few options or a combination of the following:

We could even go hyperlocal with https://phmuseumspace.bo.it

Any thoughts, recommendations or suggestions would be welcome.

I am developing a Woocommerce website where i am having various food products. I want to add vendor name as a product information without making it a multivendor marketplace. Just want to have it there for sorting purpose. I don’t want any vendor dashboard right now.

There are some well-known options for preventing the front end from adding “unnecessary” stuff to .nb files when keeping them e.g. in a git repository: CreateCellID, "FileOutlineCache" and "TrackCellChangeTimes".

However, recent Mathematica versions seem to add an ExpressionUUID to each cell, which makes the task of keeping .nb files in a repository more challenging.

So is there perhaps some dedicated option to turn that off and therefore get rid of ExpressionUUID in a given notebook?

Take PostgreSQL as just one example out of countless. It’s more than “mature” now. Yet the upgrade process is a painful ordeal which makes me upgrade once every few years instead of months. It really is that annoying.

In each release, they have a bunch of new features, meaning just more and more stuff I will never use. I don’t even currently use 99% of the features which have existed for 20+ years. Yet more and more is added all the time.

But at the same time, they don’t seem to care at all about things which are worth a trillion times the value of any new feature: smooth installing, upgrading and self-configuring in terms of performance-related directives. That last part might be the most difficult to accomplish, but would be worth it for me that not one single feature is developed for 10 years until this have figured this out.

Is new features the only way they feel satisfaction? I don’t understand it. If there is one thing that gives me pleasure with my own code and projects, it’s to improve and streamline the existing, sub-par solution/code. I almost wonder if I psychologically make it worse from the start just because I love improving it so much… But clearly, that’s not the case for most other people? They just want to pile on more and more features of very dubious use while the basics of the product are neglected.

It really makes me scratch my head, especially for a project like PostgreSQL which doesn’t need to print huge bullet points on shiny boxes which are standing in a store for people to notice and want to buy it… since it’s open source and free of charge.