I’m designing a screen with tabular data, and trying to explain to the developers what is required. First off, I want to make sure that my design is feasible.

My goal is to…

So for responsiveness, this leaves only the displayed number of rows as a variable. If there is room for only three rows to be displayed while keeping all of the mandatory controls visible, then only display three rows. If the same is rendered on a larger screen and there is room for 25 rows, then display 25. The user should always be able to expect the mandatory controls to be roughly in the same spot, regardless of real estate size.

So do you folks have some examples of this I can send to the dev team?

I am trying to follow these instructions from a post 4 years ago. I need to adapt them to Mint. Where do I get the following entries?:

Here is an example of the refind.conf file

I’m working on a SharePoint site and every site that’s within the collection displays the same navigation menu. You can make edits to the nav menu that’s displayed on a particular page, but edits made to the nav menu’s code are inherited by all of the sites in a collection.

I’m having an issue with how my site’s nav menu’s search bar is displayed. I formatted the width of the search bar properly, however, when I adjust the margin or position of the bar my browsers (IE and Chrome) crash. Making the adjustments in dev tools beforehand shows the adjusted margins/position as expected (no crashes).

So my question is: Does this sound like a SP problem or is the problem buried somewhere deep within my code’s CSS (or elsewhere)? Editing the SP site version of the nav menu’s a bit dodgy, but it doesn’t affect any of the other versions of the other sites (unless I edit the code of the nav menu itself—in their respective code files).

I have a player who has a level 8 Half Orc Paladin (STR 16, CON 18, CHA 14, Vengeance oath, Sentinel and Orcish Fury feats, no magic items) whose backstory involves running away from his home town when he was young (12 or so?) when his orcish father turned up with a horde of orcs looking for him. He hasn’t seen them since and he’s now in his 30s or so.

I was going to have his “father” turn up with a horde of orcs (15 or so) and demand his “son” back, mirroring his backstory. I was planning on guiding the narrative to the paladin PC having an honour duel with the Orc War Chief (MM, pg 246). I have a player and group who are into narrative over gaining XP (in fact we’re using milestone XP) so I think this will go down well (though if they just decide to fling fireballs at the orcs, then that’s what happens; I’m not going to railroad this too hard).

Given that this will be a BIG backstory moment for the player, I want to make sure this duel is suitably epic. I want it to be winnable, but also deadly. It should be a skin-of-his-teeth victory. I imagine (since Chaotic Evil orcs don’t have honour) that when the War Chief starts to lose, the other orcs might join in, or if the War Chief ends up on < 10HP, he might even try to run away, but we’ll see how that goes. I imagine the rest of the party will join in if this ends up happening, but until then, I imagine the duel will be a one-on-one fight between the paladin and the War Chief.

Anyway, if I want this fight to be deadly, a CR 4 monster probably isn’t going to cut it compared to a level 8 paladin (this is based on the encounter design table in the DMG, pg. 82). But at the same time, I like the War Chief’s abilities and flavour and such, so I’d rather not pick a different creature.

Ideally, this monster should be about CR 6, but I wonder if just bumping up his health, AC and attack bonus will be enough, or whether this wouldn’t really make him that much more threatening over the course of the duel (this is me trying to follow the table in the DMG, pg. 274). Even though this PC has none, magic items exist in my world so the War Chief could have one of those, but would a +1 weapon or whatever really change things that much?

How can I change the stats of the Orc War Chief to increase the CR from 4 to 6, without changing it drastically like adding spellcasting or lair actions or otherwise messing with the monster’s flavour?

Currently, I’m working on Product Listing page of a web-store. Products shown on the web-store can basically be rented out and we have defined rental prices for different time duration such as monthly price, weekly, daily, per hour, per minute. If the store owner has setup all of these prices, then we need to show them all in the product card.

As I am involved in the redesigning of the web-store, I wanted to change the look and feel of the product cards so that more cards can be fit in one row and information can be displayed properly when it comes to visuals.

Here is what I have mocked: 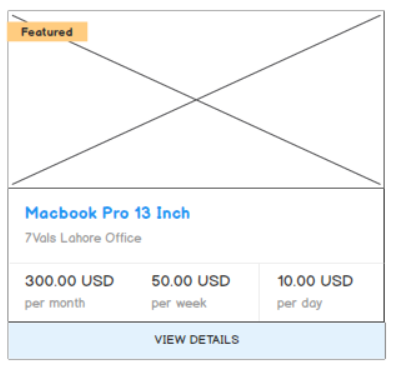 In the redesigned mock-up, we can see that only the first three price breakdowns are visible. I want to show rental prices which are per hour and per minute. For that I need extra horizontal space.

What I had in mind was to introduce a carousel inside the card in the prices section which can be used to view the remaining two prices. Will that be a good ux pattern?

Let me know what you think of this ux pattern and any alternatives that we could introduce for such case. Thanks !!

tl;dr Because of slower recovery mechanics, my Wizard cannot raise or sustain as many undead as a RAW 5E Wizard. What would be a fair alteration to the spell to bring it back inline with the intended effectiveness.

Background: I’m a player in a custom DarkSun campaign converted to 5E where we have a bit more focus on some of the grittier mechanics and realism (resource mgmt and player vs. environment). One of the changes is that the recovery mechanics were changed to 24 hours for a short rest and 1 week for a long rest. We’re not doing back-to-back dungeons so it fits our play-style fine.

My character is a Lvl 5 Wizard, wannabe necromancer. It’s become apparent that RAW, my character may not be able to fully leverage the Animate Dead spell. At lvl 5 the character has two lvl 3 spell slots but can only recover one lvl 3 spell per day/short rest (gets weird since Arcane Recovery is once per day/once per short rest but they’re the same now.. anyhow).

The Problem: My contention is that a normal 5E Wizard could potentially summon and maintain up to 4 undead. It’d take a few short/long rests to get to the max but once there it’d be easy to sustain and even make the occasional replacement. However, with our modified rest mechanics, it’s not possible for me to get above 2, and even then that assumes the DM is generous on the timing (casting time is 10 min each plus 10 for the recast, but do I need precisely 24 hour or is 23.5hr good enough?). I’m not concerned about splitting hairs on that last point, but it helps illustrate the squishy situation.

My DM tends to agree that it seems like my character is slightly powered down by this mechanic but he’s unclear on what kind of modification would be appropriate. Do you have any suggestions?

Last thought, in my head I’ve been trying to balance the impact/power of this spell compared to others that impacted less by our rest mechanics. For instance, for the price of two lvl 3 slots I could instead have 16d6 worth of fireball damage across multiple enemies (if it was 3 each that, that’d be 48d6!). But in our last fight my zombie got focused pretty hard (saving us from a healthy chunk of damage) but only successfully delivered three or four blows (so ~4d6 of single target damage). Given the obvious crowd control benefit, a couple zombies/skeletons obviously shouldn’t match the damage potential of a fireball but surely they deserve to do more than this?

I am halfway through the track but thought i would replicate a friends site using HTML and css as I am doing the track..

So I have just ran into a problem i cannot figure out.

Any help would be appreciated.

I am working on a transaction interface API where we are setting hardcoded thread pool sizes and connection counts, which we adjust by running manual stress tests and measuring how many transactions go through per second, and tweaking those by hand until we get acceptable numbers.

This got me thinking there should be a way for the application to do it itself based on certain parameters but not sure how to go about it. What are some approaches to automate this process?

This is a Spring based web API if that is relevant.

I am creating a UI, but there is a large difference between the colors that I can see on my monitor, and my TV.

Is there a way to adjust for the difference between what I see on my monitor and my TV?

As an extreme case, let us assume that my monitor displays 000000 (black), and my TV displays 666666 (gray). I got this value for my TV by checking it via color picker (or some other software, perhaps?)

Am I in the right direction?

Is there an app or software that can help me with finding out the DISPLAYED color on a monitor/screen?