Disclaimer: I’m not a DBA. I have picked up a few things from this board in the past that I’m building from.

I have a table of google analytics session start times. I have an index on each column. I want to filter for all sessions that were started between two dates. Screenshot below shows the query, and the index.

The query runs quickly but I do not believe it’s using the index based on the Execution plan which both says that there’s a missing index and shows a table scan rather than an index scan:

Is it because of something about the way I’m searching through the datetime? If instead of looking between dates, I set it equal to a date, the execution plan shows it using the index: 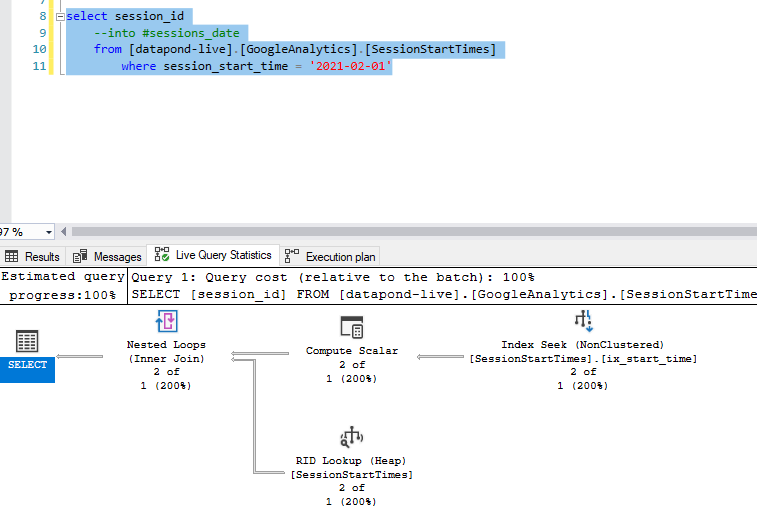 But it’s not just this table or datetime. Here’s a different table with an index on a varchar column:

And a simple query on this one also tells me I’m missing the index:

While wearing this ring, you can use an action to speak its command word. When you do so, you can see into and through solid matter for 1 minute. This vision has a radius of 30 feet. To you, solid objects within that radius appear transparent and don’t prevent light from passing through them. The vision can penetrate 1 foot of stone, 1 inch of common metal, or up to 3 feet of wood or dirt. Thicker substances block the vision, as does a thin sheet of lead.

Suppose I am a pirate. After clearing the top deck of an unfortunate cargo ship, me mateys and I head below deck where the ship’s crew have extinguished all of the lanterns to make the interior totally dark. But I have a Ring of X-ray Vision. I speak the command word.

From my perspective, does my X-ray vision cause day light from outside to pass through the upper deck into this lower deck, illuminating the space as if it were day light?

I recently put the site for my web design business up on google. It’s been online for about two weeks and according to Google Search Console, has been indexed several times. Despite this, I can only find it on google if I type the actual url into google. Typing the business name verbatim doesn’t work, typing the contents of the meta description tag doesn’t work. The things that do come up are a worse match. I can type my business name perfectly and things that are off by one or more characters will show up instead. I’ve gone to the 15th page of google search results and found nothing. The google search console is even claiming that my page has 7 total impressions, with an average position of 1. I can’t tell if that’s just because of me typing the url exactly or if it’s actually organic.

Important Note: My server automatically responds with a 301 redirect to the https url when someone goes to the http url. Does the Google indexing bot mishandle this somehow?

Here is what the google search console looks like: 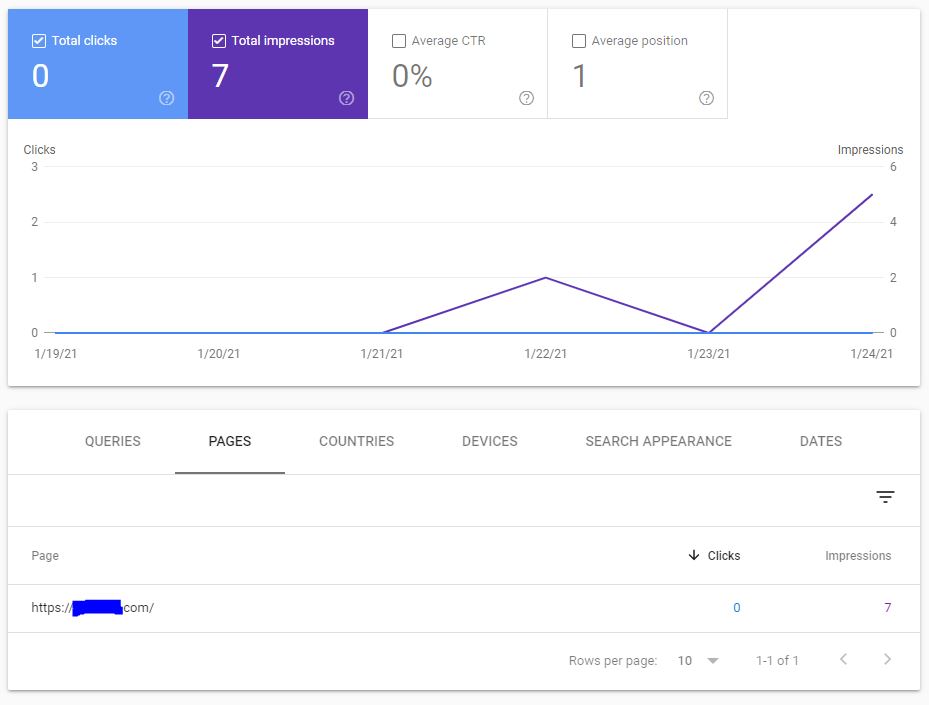 I have a sitemap.xml and a robots.txt. Google search console claims that it has discovered my URL, as a result of the sitemap.xml. I don’t understand why it will only come up in google search when I type the exact url. The contents of the meta description and meta author tags have to be unique, and they still don’t bring anything up.

I should also note that I ran lighthouse on my site and got a 95/100 on the SEO portion.

I have post written in 3 categories: author1 author2 author3.

But I want to show out only one category in post name: multiple authors, not show all 3 categories.

I have bookmarked all my WordPress sites with Firefox, but there are two sites do not show their favicons in the Bookmarks folder. How come?

When I don’t have a logo, the tag line and the description is shown.

When I add a custom logo, the tag line and the description disappears.

This was edited to show what I need. The tag line and the description need to show, shifting to the right of the logo.

I am joining a campaign with some friends and they suggested that I should play a Gloom Stalker Ranger. I rarely get a chance to use things from anything other than the players handbook so I want to try something new. I want to know if it’s even worth playing a gloom stalker and still contribute to the party with both damage and role-playing capabilities because currently my friends are playing rogues and I want to fit the setting (which is a thieves guild type setting) and still do a good amount of damage to help balance out the party.

In the game I’m running, the PCs are about to embark on a wilderness trek during which they will be harried by an opponent who has access to the major image spell. This opponent seeks to distract, mislead, and delay them, forcing them to spend more time and resources reaching their objective than they would otherwise.

I am trying to determine what is possible within the constraints of the major image spell description. One thing that occurred to me is that, while the spell’s effects are confined to a 20′ cube, they might seem to be spread over a much greater area by tricks of forced perspective. For example, an illusory, 20′ tall castle suspended in mid-air between the party and a distant hill might appear to be a full-size castle settled on the hill. Or a 20′ wide illusion of a wall of flames might seem to be consuming a vast span of the horizon.

Or alternatively, an illusory pit might seem to be much deeper than 20′ by "drawing" its walls and bottom in such a way as to make it seem deeper.

Can forced perspective be used with major image in this way?

Are there potential drawbacks to allowing this? Would any modifiers be appropriate for investigation checks to "disbelieve" them?

i have a site, nartrade.az which is indexed by google. it appears on google search in my country(Azerbaijan). but when i search from different countries(i.e Turkey) on google, it doesn’t appear on google search.

I find myself involved in discussions frequently where one person will claim that a piece of text in a rulebook is "just fluff" or "pure flavor" and can be "refluffed" by the players with little or no DM oversight, while others are "mechanics" or "crunch" that requires a house-rule to change.

Specifically, the things cited as "fluff" are those that do not have an attached dice roll or explicit benefit/penalty listed. Things like the descriptions of classes, feats, things like "Druids won’t wear metal armor." On the other hand, "mechanics" or "crunch" includes rule text that has direct, explicit application to the game world, especially when expressed in pseudo-mathematical form (such as dice rolls, damage, or bonuses and penalties).

I know that 4e had a specific rule that said that descriptive text in italics in an ability entry or elsewhere was just an example (ie fluff) and could be changed at will. But I’m pretty sure that this distinction pre-dates 4e–I remember hearing it invoked to justify taking prestige classes (3.5e) completely out of context and apply them without satisfying the "fluff" prerequisites (such as meeting/being trained by someone of the appropriate faction).

I’m interested to know where (and in what context) this distinction first (or dominantly) arose. More than that, I’m interested in finding examples of where this distinction has direct rules support. So far, 4e D&D is the one I know of. Citations to rulebooks would be wonderful. This is not D&D specific, although most of my knowledge is of D&D’s history.