I was using the martfury theme for my site before and they had separate fields for the shop page description and product page description. I’ve since changed themes and it only shows a section for short product description. Could somebody please tell me how martfury was able to implement this? I’ve attached a screenshot to show what I mean. Thanks so much! 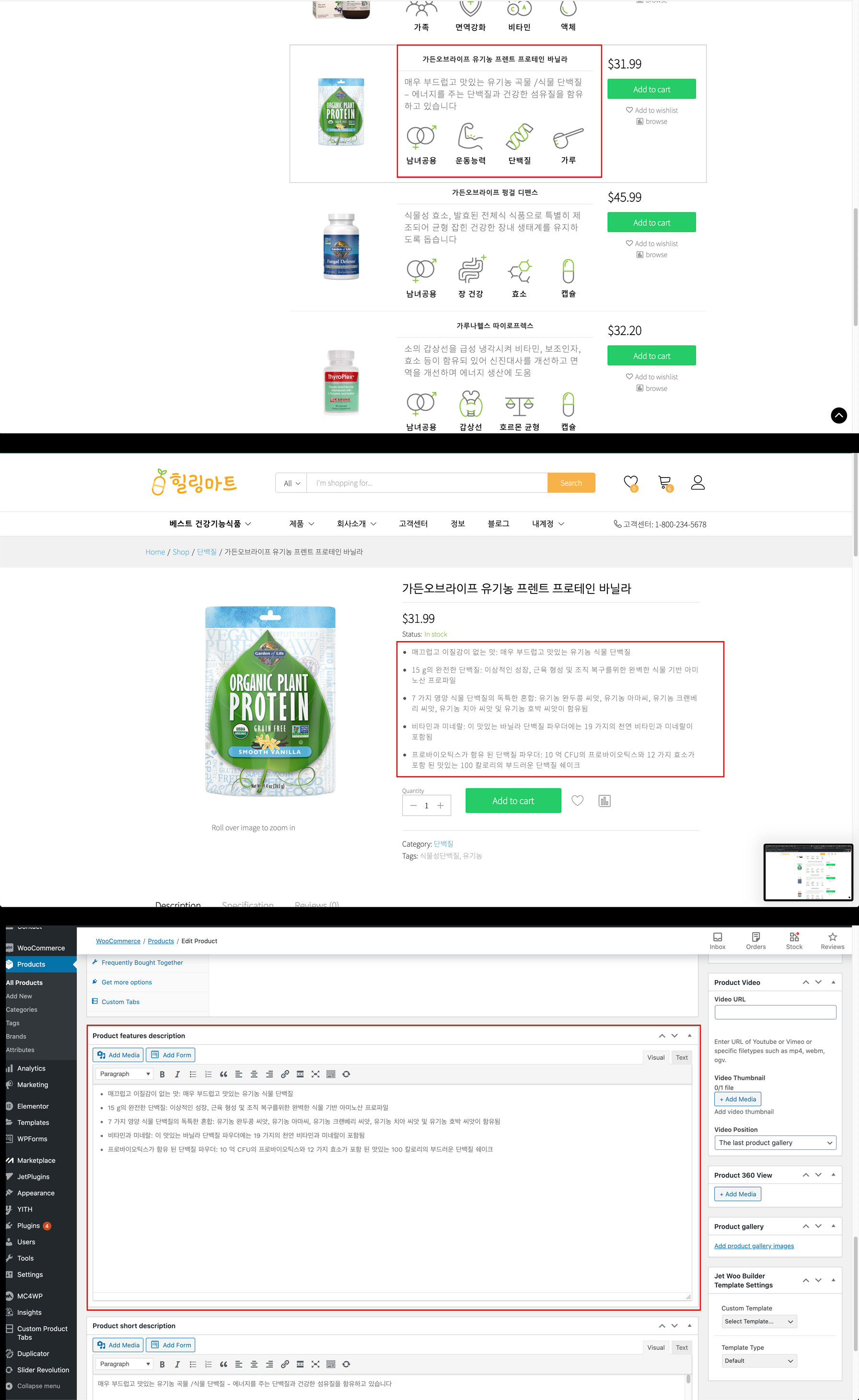 Is it possible to show all the catalog of my WooCommerce store and below all the content of the cart page?

I was able to do it (with a custom page) but the shipping calculator doesn’t work.

Is there a method to show out of stock WooCommerce products with a shortcode when you have out of stock items ‘hidden’ on the catalog?

I’ve developped my ecommerce website using flatsome and woocommerce, i’m very happy with the theme but I don’t know how to add my variant (size) on the image of the product catalog.

I’ve found a way to display the variant below the product title like this : Display WooCommerce only in stock sizes product attribute on shop page

But not on the image itself.

Any suggestion on how to do this ?

First off 0 and 4 are just for the loop from 0 to 4 and no actual symbols right?

On a desktop view in the catalog there is a function that start to scroll the images of a product when you hover over them with the mouse which works perfectly fine.

But in mobile we do not have the hoover function which means that the image scrolling is not used at all. I have not been able to find any examples of shops that do this but it feels like untapped potential.

Tapping a product image opens the pdp but long press etc have been considered.

A technical limitation we have is that only the first image is loaded from the start and during the mouse enter event we load the rest of the images and start scrolling so we do not know in before hand how many images might be available.

Or would this be a bad practice all together?

We have an app that gives out error ([SPLoaderError.loadComponentError]: ***Failed to load component) because it doesn’t reside in the same domain as the app catalog. is there a way of move the catalog without having to delete and create a new one?

I’m working with a client who just set up a new SharePoint 2016 site on their server. They created an App Catalog but when I load in a custom SharePoint App, the App Catalog doesn’t read in the version from the AppManifest.XML and sets the version to 1.0.0.0 nor is the app assigned a Product ID – the Product ID is left blank.

The same App is uploaded with the correct metadata on other sites.

Is there something that needs to be configured so the App Catalog library behaves like an App Catalog?

I’m currently working at a large B2B company which operates in a very traditional market (ordering happens mainly by phone, e-mail and even fax).

Since many years we are using a product catalog (print) with over 5000 products in it, but since it costs a lot of money to print and send it to our customers, we slowly want to move to digital.

The big question is: how can we translate this print manual to a digital version?

There are many PDF e-publishing tools, but that doesn’t really work with a 500 page catalog.

There are some examples like IKEA (where you can browse through pages online and download a pdf version): https://onlinecatalogue.ikea.com/PT/en/IKEA_Catalogue/#/pages/1

What are best practices here? What is the purpose of an online version? For reading? For buying (should we link products to a webshop)?

Another question: could a digital product catalog replace a printed version when customers are still ordering by phone / e-mail?

Many thanks in advance, looking forward to your reply.

I have a SP2019 web application at https://sp.test.int I need to add an app catalog.

First, I went into Central Admin –> Apps and configured the web app URLs as follows:

Next, I created a subdomain in DNS for apps.test.int with a wildcard A record * pointing to the SharePoint server IP. (These sites use Kerberos so, no CNAMES).

After the DNS was complete, created a wildcard SSL cert, *.apps.test.int from my PKI.

After all that it’s time to modify the IIS bindings for sp.test.int.

Binding 1 will respond for calls made directly to sp.test.int and Binding 2 will respond to everything else like app-akfj49374.apps.test.int.

So far so good. I’ve setup SharePoint 2013 a dozen times with this exact configuration and it has always worked just fine.

Now, along comes SP2019… This configuration refuses to work. When I add a app to a page, the server responds with a 500 Error, System.ServiceModel.ServiceActivationException when calling /_vti_bin/client.svc

From what the Googles has found, this is an issue caused by a configuration issue when multiple bindings exist on the same IIS listener. One reference suggested to adding an entry in the ISAPI web.config file to allow multiple bindings. Not really my favorite solution as the config files can get refreshed during updates.

Next, remove binding #2 from the first IIS site and configure the same binding to the new IIS site: HTTPS, no SNI and the certificate *.apps.test.int.

The good news, it works great!

The bad news, what if I have a second web application in need of a app catalog? Do I fall back to the old days of adding IP addresses for each web application? Ugh…

My question: Has anyone else experienced these issues or is it just my environment? The use of multiple binding for the IIS site has worked fine until now.

Is this another new ‘feature’ or is it a bug?