You produce your artificer spell effects through your tools. You must have a spellcasting focus – specifically tinker’ tools or some kind of artisan’s tool – in hand when you cast any spell with this Spellcasting feature. You must be proficient with the tool to use it in this way.

"Artisan’s tool" is singular. But it can refer to a set of objects.

Weaver’s tools include thread, needles, and scraps of cloth.

Weaver’s tools are an artisan’s tool but does an artificer proficient with them need to hold the needle, thread, and cloth in one hand to cast spells?

For example, the party has been striped of all their belongings but not their clothes. Can an artificer with proficiency in weaver’s tools tear off a scrap of their clothing and begin casting?

To make a long story short: for my first D&D campaign, I want to create a warlock that had to give up her voice as a part of her deal with her Patron.

As such, she is incapable of speaking, but she can still produce sounds with her mouth. I was wondering if that would incapacitate her from casting spells with a Verbal component.

Do spells needs a specific phrase to be cast, or does gibberish work?

… but I can’t find a list of all the values ​​that we can use there.

I know about bold, italic, link, strikethrough but there are more elements.

So what is the complete list of supported values?

I just got into dnd and am creating my first character (a half elf wizard). I am at the starting equipment section, and can’t chose between the component pouch or arcane focus. I have looked up the pros and cons of both, but I am still indecisive. Is one easier to use than the other? This game is already pretty confusing so if one is easier to use it’d be very helpful to know. Have a wonderful day!

I have started a new campaign and am considering making life a little easier for my spell casters by not expecting them to source and find all there components ahead of time. Especially where components are destroyed. Instead being willing to allow them to operate a tax system. If a spell requires a 1000GP gem bowl just have them remove 1000GP from the inventory instead of making them find and buy the bowl. One of the main reasons for this is that the new party has a druid, cleric and paladin so a lot of spells potentially for them to go and source components for and as new players I want to try and streamline things a bit.

Is this an accepted standard mechanic for managing spell caster components or are there other ways of simplifying this aspect of spell management.

Does a level 20 druid need components for spells when in another form caused by non-wildshape effects that change their form but still allow them access to their class features, like the spell Shapechange?

My party recently tipped over a boat of enemies into what was essentially rapids and trapped the enemies in a cube of force underwater. The warriors inevitably drowned as they had no way out. However, trapped in the cube of force was a wizard with access to a teleportation spell (Misty Step) with a verbal component. Could the wizard use his spell with a verbal component underwater and escape a watery death? If the rules don’t specify anything about verbal components underwater specifically, have any of the designers mentioned anything about this?

Note: as a 5e DM I made a ruling on the spot (decided to allow it on the condition that the caster goes directly from “holding breath” to “suffocating”) so I am aware that it’s within my power to decide how it works in my world. I’d just like to know if the rules or someone wiser than me has addressed this yet.

Summon Components (Complete Mage, p. 118) has a range of 0 feet, in order to persist a spell with the Persisten Spell (Complete Arcane, p. 81) metamagic feat the range must be "personal".

Is it possible to consider a spell whit range 0 ft. to be the same as "personal"?

I am working on a game tutorial right now and I need to freeze constraints for a model prefab. I add a Rigidbody component and I want to freeze rotations on the x and z axes. However, I am not able to find the option in the component. Is there another way to access rotation constraints (I do not want to code the constraints at the moment)? Or is there something I am missing in the new version. Please do let me know. Thanks 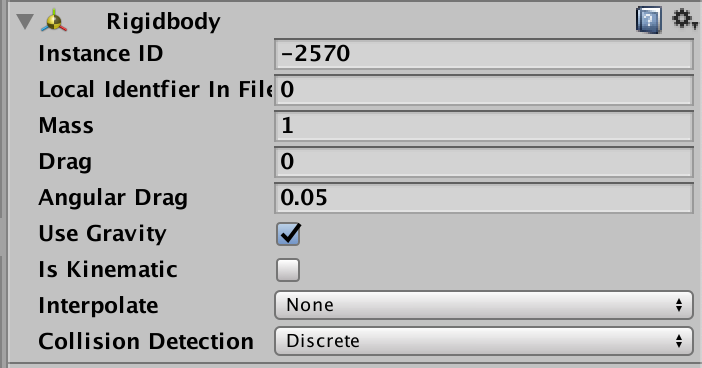