In my sessions I’ve repeatedly noted that after a few bad rolls, one of my players (age 20) seems to become reclusive and stop paying attention.

Now I’ve tried various methods to get the player to pay attention again, but it seems that no matter how much his PC is punished or rewarded in game, even to the point of almost dieing to a hefty bag of gold, that this player did not care. I’ve even tried abstract methods, and given him a verbal slap, getting the other players to laugh at his PCs expense just to see if he’d dignify his character. Complete disconnect. The Player didn’t even care.

A Few rounds later, the dice rolls are in his favor, and suddenly, he cares about the story again! Participation happens, and the players are moving nicely.

This is bad for both of us. For me because suddenly I’ve got a brain dead PC that is being lugged around, slowing the game. For him, because he isn’t enjoying the game.

How do I as a DM prevent the disconnect that happens when players are on a bad luck streak?

first of all its my first question in Stackoverflow, because im hardstuck in a problem right now. So hopefully someone can help me with that.

The project: I am building a Product Configurator for a Website. The main goal is, that customers can configurate their product and the options they selected are automatically placed in a Contact Form.

I am working on WordPress with Elementor. The Plugin I used for the configurator is: "Woocommerce Extra Product options"

My Problem: I need to get the ID’s of the specific selected containers and fill the text of the containers automatically in the Form down below.

Does anyone know how i can do this? Maybe in a .php file? Or in elementor? I did some massive CSS on the site, so that it looks like it is right now. This Selector is to select all containers of the Dropdowns.

This didnt work: the output is "undefined"

PS: The site could look a bit messy i am sorry for that

Inspired by this Q&A: How to handle falling down stairs?

It has a casting time of 1 Reaction:

which you take when you or a creature within 60 feet of you falls.

In my answer to the above Q&A, I document three (stair) cases where the characters can fall down stairs and take damage.

From Tales from the Yawning Portal:

From Rime of the Frostmaiden:

From Rise of Tiamat:

In the example from Yawning Portal the word "falls" is used to describe our descent of the stairs. In the latter two examples, the word "tumbles" and the phrase "sliding and tumbling" are used instead. As noted in my answer to the linked question, the module guidance for falling down stairs is very similar to the usual rules for falling.

It is well-established in fiction — as in real life — that falling down a flight of stairs is dangerous. A significant tumble can seriously injure or kill a person. "Pushed down a flight of stairs" is by now a hackneyed modus operandi in crime dramas. Recognizing that D&D is not a physics simulation, how should a DM model that danger?

Under normal falling rules, "[a] fall from a great height" deals 1d6 damage per 10 feet fallen. (PHB p. 183.) That wording seems to presume a freefall ending in a single, hard impact. Falling down stairs is at least arguably different: it doesn’t involve the same velocity, but it might involve a lot more bludgeoning.

Do the normal falling rules cover falling down stairs? Are there any alternative rules in published 5E materials? If it helps, our table does use the optional falling rules from Xanathar’s Guide to Everything, although so far we haven’t treated those rules as answering this question.

Can you just use misty step to teleport over someone and then let yourself fall down? Or is the "space above someone" also occupied if he just stands on the ground? What’s the RAW here?

List down some of the popular social media tools.

I’m using VS 2019 with the latest version of SQL Server Integration Services Projects plugin. I have 2 local SQL Server instances installed on the same machine which are up and running (including Browser service). SQL Server is 2017 and 2019 (default and named instance respectively) and their Hide Instance flag is set to No. When adding Data Link for Data Flow SSIS tasks server drop down not showing my SQL instances like that: 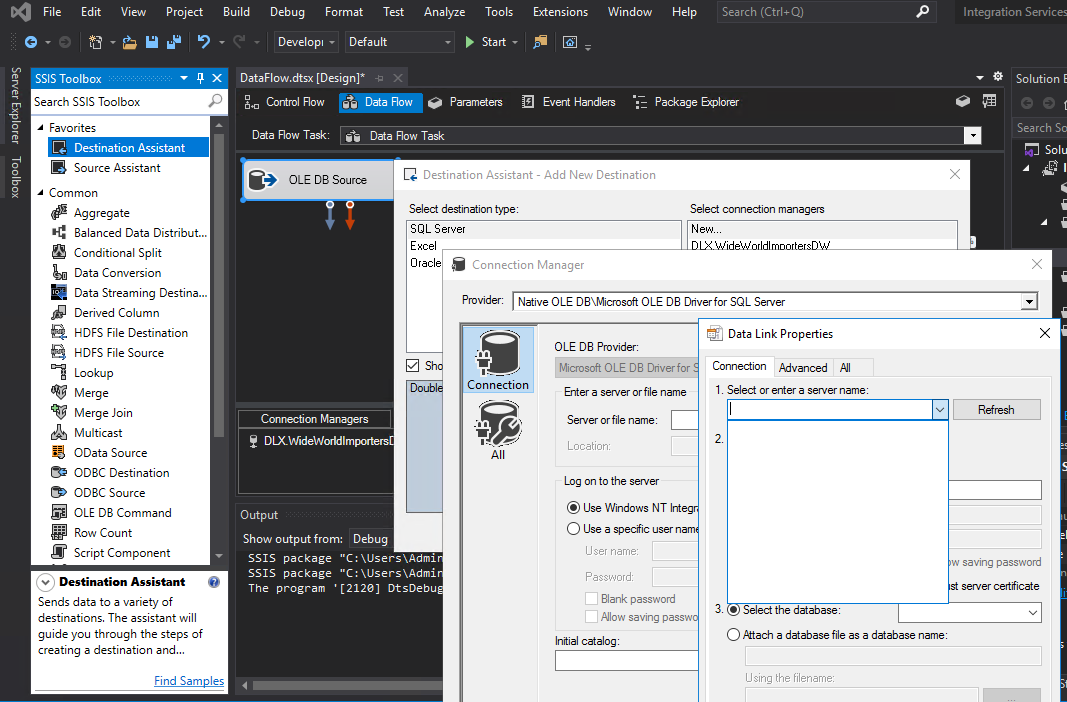 At the same time if I type in SQL Server instance name I can connect just fine. What can be causing my SQL instances not showing up here?

Hi! whats the problem or wrong setup may be in this case:

I start 2-3 projects. Each in own bunch of emails (Catchallboxes, Asiavirtualsolutions and mail.ru with no spam.

I tested 50-300 treads in global settings but no result. Speed down fast soon in all settings.

Sitelists and projects – all the same I use before. For example – GSA has keep stable speed 40-60  VPM  from week to week and last days I cant find the problem point.

I’m new to D&D. I already read both the Player’s Handbook and Dungeon Master’s Guide (I’m mastering) and I would like to know how I could handle this situation:

A player wants to do a sweep kick on an enemy’s legs and knock him down. He rolls a 20 and does the damage, but what about taking the enemy down? There is no rule that covers it.

Following the rules, the player would have to do a specific action to try to push the enemy down, and there would have to be a resisted check to see if the player can actually drop the enemy, so how could I deal with that?

In my campaign I have a villain who uses misdirection and avoidance as their main combat methods. As last resort when the party confronts them in their lair it would be appropriate for them to use Prismatic Wall to prevent the party from killing or capturing them.

This enemy is clever but arrogant, they will likely cast this spell toward the end of a drawn out battle meaning the party may already be down on resources. Without warning they might need to defeat a Prismatic Wall the party may expend the required resources before it appears.

In my party I have:

The party is currently 9th level and they will likely confront this enemy some time between 12th and 14th level depending on how direct their approach is.

The party is equipped slightly below normal for their level due to some decisions made to this point in the campaign. None of their current items will be a particular benefit in this task.

I would like my party to have a reasonable chance of actually being able to bring down this wall. If I just throw it at them the chance of this is basically 0. This is the first campaign for all of my players and they have never encounter anything like this before.

Between the various spellcasters in the party they already have access to 5 out of the 7 required spells. Disintegrate and Passwall being the exceptions. I can easily provide them access to the others between now and the confrontation. However, the party does not always prepare these specific spells and may not have them available when required.

How can I, as DM, prepare my players to defeat a Prismatic Wall spell, without explicitly telling them it is coming?

I will likely need to provide them both with information on how to defeat it and provide some resources to help them do so. I am willing to provide help in the form of items, lore dumps from NPCs and potentially NPC allies, though I prefer not to have NPC perform critical actions in place of the players.