Any time he makes an unskilled roll for a Smarts-based skill, he may do so at d4 instead of the usual d4–2.

Languages fit under the category “Knowledge (Smarts)”, and so are Smarts-based skills. The chart for Languages says:

d4: The character can read, write, and speak common words and phrases

Does this mean Jack-Of-All-Trades edge provide the ability to read/write/speak common words and phrases in any language?

We have cyclic directed graph (possibly disconnected). For cycles consisting of two vertices A->B and B->A, we replace them by a single vertex. In case of A->B, B->C, C->A we also replace them by one vertex. We replace N vertices when all reachable from each other. Edges leaving a vertex stay as edges leaving the group containing the vertex. For example,

How is algorithm? Practical application of problem: we have class where method depends from fields and other methods. How decomposite to max number smallest classes? we allow multiple inheritance, inheritance diamond, but not allow cycles.

Given a graph $ G = (V,A)$ , with source $ s$ , sink $ t$ , edge capacity larger than 1 (but not all equal), I know that if we decrease the capacity of one edge by 1, the $ s,t$ -maximum flow decreases by at most 1. But I would like to know what happens to max flow if we decrease (or increase) the capacity of all edges by 1. I’d appreciate any comments/insights on this. Thanks!

I am working on a problem that considers the list of cycles that a certain vertex belongs to in a graph! After computing all simple cycles with Johnson algorithm, I realized that I don’t need them all but instead, for every vertex, a list of cycles covering the edges of its cycles would be enough! I made few searches and found out there is the Edge Cycle Cover and finding the minimum is NP-HARD problem. I’m not sure if it is exactly what I’m looking for. Also, I don’t want to process all the simple cycles returned cause it may increase the global algorithm complexity.

So, any help understanding this problem? Is there a heuristic to get only a subset of cycles for each vertex in the graph? it does not have to be minimal!

In the Cypher System rulebook, somes abilities (like Accelerate Third Tier Speaker) say instead of dealing efforts to decrase the difficulty, you can use it to affect more targets, but you must spend one action per target, and so one target per turn only.

But you can reduce cost with Edge, why would you make those efforts since you can just use the ability each turn, each time for one target, and each time using Edge to reduce.

As titled. I thought of using Depth First Search (DFS) to find all possible paths in O(|V|+|E|). However, computing the product of all the edge weights for a path is O(2^N). Is there any way to compute this more efficiently?

We are embedding a MS Form within a Modern SharePoint page and it works perfectly fine in Google Chrome but this error is displaying when viewing the same page in MS Edge . Any ideas on how to resolve this or are MS Forms not supported in MS Edge?! 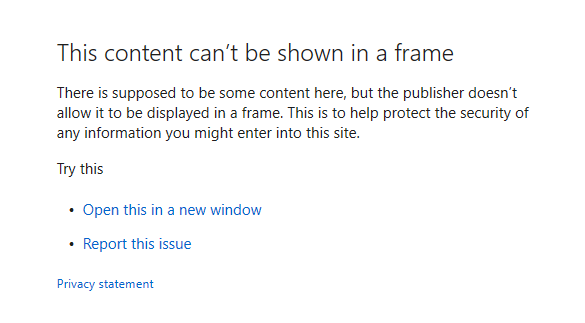 I have a nested graph filtration and each step I have to find the shortest path between two nodes. At each step I just add one edge to the graph so the re-computation of the Dijkstra algorithm is extremely redundant. Is there any algorithm to circumvent this?

I’ve been checking out Star Wars – Edge of the Empire and I really like the initiative system used in it.

In essence, players roll initiative ‘slots’ that can then be used by any player to take their turns each round.

I’m considering implementing this in my 5e campaign, as I’m not a huge fan of the static initiative rules they currently have. Players would roll for initiative as normal, but then would be able to freely choose their turn order within the rolled slots.

I realize this would be a significant step up in power for the PCs, as they would be able to much more consistently pull off synergies between classes that are highly dependent on turn order (eg. barbarian knocks enemy prone and rogue can get the sneak attack before the enemy stands back up), as well as increasing the potential effects of ‘until end of next turn’ features (eg. monk going first on round 1, using stunning strike, then going last on turn 2 so the enemy is effectively stunned for 2 rounds). However, I plan to combat this by having enemies able to use the same system to gain similar advantages.

My aim is to enable tactical choices regarding turn order and initiative, beyond those of the base rules.

Considering the above, to what extent would using this initiative system break/unbalance the game? I’m fine with an overall increase in power level, as I can adjust encounters etc. to suit but I’d like to avoid upsetting the class balance if possible.

Disrupting Touch is an ability that can only be used when the player has already declared a use of the “Phase Sprint” ability. The Player’s Handbook states for Phase Sprint:

Note that some of your other special abilities enable specific actions that you can take while using Phase Sprint. For instance, when using Disrupting Touch, you can make one touch attack while moving…”

and for Phase Sprint

You can turn your Phase Sprint into a melee attack by purposefully grazing another creature as you run.

So the question is, are these played in combat as two actions, or one, and how is the cost paid? Is it:

The player would, of course, prefer #2, but we’d all prefer to be sure we applied the system’s rules properly.