As i was testing the security of my own network, i visited the login page of my router. I wanted to see how it managed the credentials. This was when i noticed it transformed the entered password to a ciphered text, with some obvious visible patterns. This was found via burpsuite, and was decoded with the base64. However, the decoded text ONLY provided the password in clear text, except the last two characters.

All obfuscated text ends with %3D which is something i wanted to comment about but i just found it out from this link that it’s due to URL encoding of the ‘=’ sign.

And i just figured out the answer to this questions whilst creating it..

I would like to store the nodes of a Calling Context Tree using in a key value store. I need to be able to directly access a node by it’s method name and complete stack trace. In addition in need to access all nodes of a method by only it’s name (the key value store supports a loading based on prefix).

The first idea is to use the method name + an encoded stack trace as key, e.g. the concatenated string representations. Unfortunately this can get quite large and I cannot use keys of arbitrary length. So the second idea was to encode the stack trace in a deterministic and reversible way. So my next idea was to encode the stack trace in a 64 bit integer, by adding the 32 bit hash representations of the methods in the stack. Unfortunately this is not collision free as the traces A -> B -> C and B -> A -> C compute to the same values even though the traces are different. So my current idea is to encode the traces by:

They key is then method name concatenated with the encoded stack trace value.

Is this implementation collision safe? I think not 100% however I don’t know how to compute the probability under the assumption that the method hash computation is a perfect hashing algorithm.

If it is not safe, are there other implementations/directions I can look into?

Something is messing up / getting double encoded?

Breakdown of the URL, for a clearer view:

Altered version, as per progress so far:

Can anyone help me figure out the remaining?

During a penetration test, I ran across a server that was storing passwords in its database in what seems to be a binary array of sorts:

The server in question is a Tomcat server and the application is running a Java program. I considered that this might be a array of sorts but I can’t seem to convert these arrays into anything readable or usable. Does anyone have any ideas?

I am building a web application in which a third party library is used, which transforms the user input into JSON and sends it to an controller action. In this action, we serialize the input using the standard Microsoft serialize from the System.Text.Json namespace.

However currently, the json is rendered back to the page, within a script block and using @Html.Raw(), which raised an alarm with me, when I reviewed the code.

While testing if this creates an opening for script injection, I added

to the input. This input is transformed into

This look fine. Rendering this to the page does not result code execution, when I tested that.

So, is unicode character encoding really a good protection against script injection, or should I not rely on it?

Is it conceivable that unicode encoding is lost somewhere during processing? Like (de)serializing once more, etc?

This seems like a question that has been asked and answered before, but I couldn’t find it.

It seems to me that Unicode is the “final” character encoding. I cannot imagine anything else replacing it at this point. I’m frankly confused about why UTF-16 and UTF-32 etc. exist at all, not to mention all the non-Unicode character encodings (unless for legacy purposes).

In my system, I’ve hardcoded UTF-8 as the one and only supported character encoding for my database, my source code files, and any data I create or import to my system. My system internally works solely in UTF-8. I cannot imagine ever needing to change this, for any reason.

Is there a reason I should expect this to change at some point? Will UTF-8 ever become “obsolete” and replaced by “UniversalCode-128” or something, which also includes the alphabets of later discovered nearby galaxies’ civilizations?

I have $ m$ equations of the following form: $ $ x_1+x_2+\cdots+x_n=s,$ $ where each variable is either 1 or 0, and the total number of variables is $ m\approx3{,}000$ . So I’m thinking of modeling each variable as a binary variable and each equation as a CNF formula so that, once I combine all formulas into one CNF, I can solve it using a SAT solver.

My problem is how to encode addition efficiently and simply. My only known approach is to model $ a+b$ as a circuit and then convert the big totality of $ n$ circuits to a CNF. Is there a better way?

Let’s define a “semi-rewritable” memory device as having the following properties:

Making a physical interpretation of this is easy. Consider for instance a punch card where new holes can easily be made, but old holes can not be filled.

What makes this different from a “write once, read many” device is that a used device can be rewritten (multiple times), at the cost of reduced capacity for each rewrite.

Information in this scheme is stored on the device as pairs of binary symbols, each pair encoding one of the three states of a ternary symbol, or [DISCARDED] in the case where both symbols have been written.

When the device is rewritten, the encoder considers each pair of binary symbols in sequence. If the existing state matches the one it desires to write, the encoder considers the data written. If on the other hand the pair doesn’t match, it writes the necessary modification to that pair, or in the case where that isn’t possible, writes the symbol [DISCARDED] and considers the next pair instead until it has successfully written the ternary symbol.

As such, every rewrite would discard $ \frac{4}{9}$ of existing capacity.

I was going through the classic text “Introduction to Automata Theory, Languages and Computation” by Hopcroft,Ullman,Motwani where I came across the simulation of a turing machine using a real computer. There the author argued that it shall be almost impossible to carryout the above simulation (not considering universal turing machine) if the number of tape symbols are quite huge. In such a situation it might happen that the code of a tape symbol might not fit in the single hard-disk of a computer.

Then the author makes a claim as:

I assume the usual encoding as we do in digital logic say to encode $ 8$ symbols we need atleast $ 3$ bits of code. Then to represent $ n$ symbols if $ k$ bits are required then we should have the following relation,

Now if our disk can hold all the $ n$ symbols then we shall have the following relation true:

Solving graphically I have: 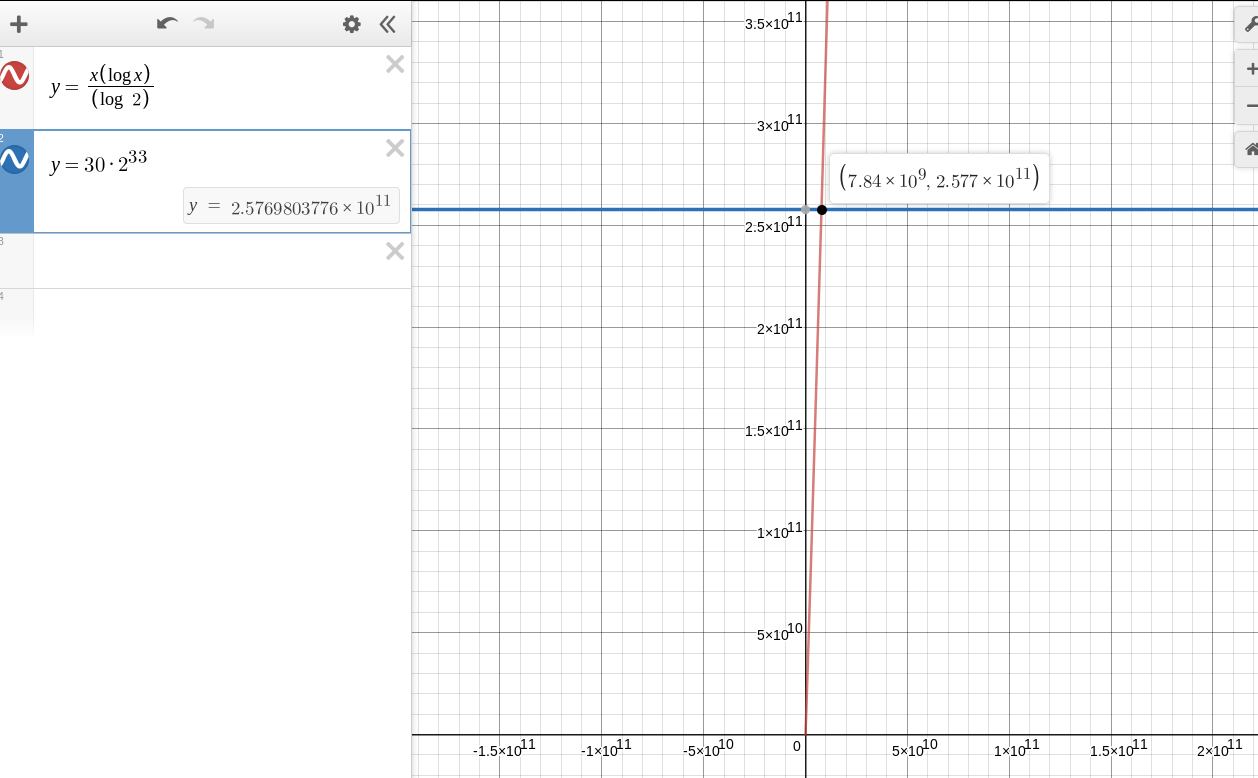 Where am I making the mistake?