I noticed a process on the server which has been running for more than 12 days, which I think coincides with the last time MySQL was restarted.

There are no events, and I haven’t attempted to created any.

This is actively using up to 8% of my server’s CPU.

Is there a way of determining what this is, or why it was started? Will this try to run every time I restart MySQL? If so, what is it ‘waiting’ for and do I need to tweak my configuration at all to prevent this?

I would like to use a different ccs file based on a javascript click event. The user will have a choice of color themes by clicking one of the colored buttons on the screen. I originally have it working by providing the linked css with an id that can be targeted with javascript. The link is in the HTML head tag of course. In WordPress though we enqueue the css file in the functions.php file and so I am not sure how to give the css file an ID to target it with the javascript. If anyone can help me out or point me in the right direction I will really appreciate it. I am open to all possibilities and I thank you all in advance. if you need me to elaborate more feel free to let me know.

Dear friends, I need a help. I am facing a problem;

I have setup facebook customerchat in my site. It appear at the bottom-right corner of the page. When clicked on the green round button it open.

View attachment 255988
# I wish to add another option on it, so that I can also open this chat clicking another button/ image/ text also. Suppose see the attchment, if I click on "Chat with us" or the female face image, it will open the customer chat same way.

Optional:
Also can I add…

My question is actually a request for papers, articles, texts or books on the problem that I’m trying to solve on my work.

I’m working on a program that computes a predicate value (true or false) for a given object in a distributed system in which there is a stream of events that can change the object’s attributes and, consequentially, the predicate value. Whenever the predicate value changes, the program must send a notification about this change.

Now, the events don’t necessarily show up in the stream in the correct order and, even worst, there are multiple computers parallelly processing this stream of events. However, for simplicity, I’ll go further in this example considering only one computer.

If the events arrive and are processed in the order described above, then the notifications sent should be:

That is the correct sequence of notifications. Now, imagine that the computer receives the events in the following order:

A naive algorithm which doesn’t consider the event’s timestamp would send an incorrect sequence of notifications:

The algorithm that I’m working on considers the timestamps and infers when a notification should have been sent but was not. So when e3 arrives it will notice that the notification P(A) = true for e5 was not sent. This feels a bit like reinventing the wheel, though I’m not aware of any reading about this problem. I would like some references to this problem or to something similar, like some papers dealing with this kind of problem.

The real problem is quite more complex since it involves storing the predicate $ \times$ object state in a database that works as a shared state between the computers processing the stream and I’m talking about thousands of events arriving per second so it’s not possible to keep all events stored in some database.

I need to compute the sum of durations of multiple events based on consecutive values in another column.

The event is considered being active as long as the column w has a consecutive value of true.

What would be the best/most performant approach to computing these values? The longest time range we’ll be looking at will probably be half a year involving about 30 million rows.

I wrote a custom aggregate function that computes the duration but it takes about 16 seconds for only 1.5 million rows.

I’m new to SQL and basically just got this working through trial and error, so I’m sure there is room for improvement. Maybe even a whole different approach. Here’s a fiddle with the aggregate function.

I created a post metabox that uses the datepicker to pick a date value. I got as far as adding the metabox and getting the datepicker to work but other than that im struggling to get the data saved to the post. This is my code in my functions.php:

I’m having trouble finding a GTM error. The error states that Google Tag Manager isn’t receiving the URL/page-name in Google’s Behavior->Landing Pages report before it receives an event.

The error appears to be happening on all of the major browsers, so it doesn’t seem to be browser specific.

I tried to lookup one session by matching the session duration with user sessions. The session begins at 11:58 pm and ends at 12:04 am. However, when I use Google’s Tag Assistant, it doesn’t show any errors.

If this were the problem page, it would appear that GTM looses the page name when the session wraps over the midnight hour, but this seems improbable. 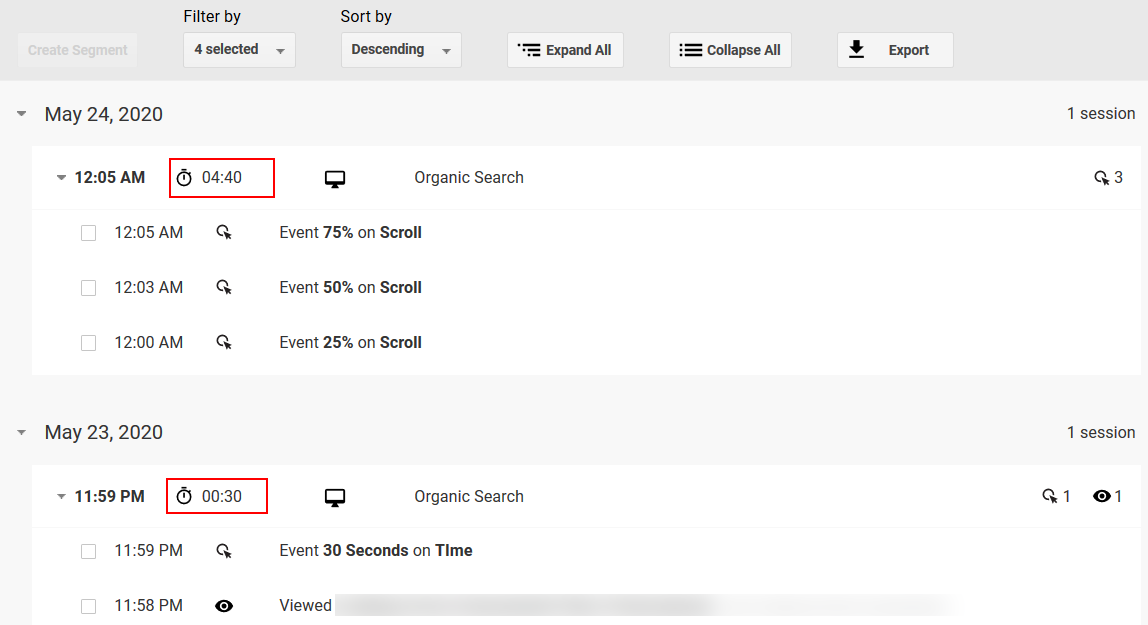 How can I properly identify the offending page without using Google Tag Assistant on every single page?

I’m using Splunk to try to detect multiple Windows login sessions by a single user, as an indicator of compromise. However, I’m not sure how to go about this – I can ingest workstation logs (events 4624/4634) and look for a large discrepancy between logins and logouts (indicating a high number of sessions) in the workstation logs, but there’s a few problems.

Is there an elegant solution for this? Even if there isn’t – is there an agreed-upon list of Windows event IDs I should track to develop a better picture of high login sessions? Thanks!

Similar to augury but more powerful, a divination spell can provide you with a useful piece of advice in reply to a question concerning a specific goal, event, or activity that is to occur within 1 week.

I’m not sure what limitations the language about “a specific goal, event, or activity” imposes. The immediate motivation for this comes from a Kingmaker campaign that I’m currently running. After an attack on their capital, my players came up with the idea of casting divination once a week to ask “Will anything attack our kingdom this week?”

I’m trying to figure out if this is specific enough, and if not, what would be specific enough. On one hand, it’s not a specific event – they aren’t expecting any particular attack. On the other hand, it’s arguably a specific goal – keeping their citizens safe from large-scale threats.

Also, I expect my players to use divination many times during this campaign, so I’d like to know how this language limits the spell beyond this one case.