Bards get Expertise at level 3. How does this work?

The PHB states that when using combat expertise “the changes to attack rolls and Armor Class last until your next action.”

So when you attack with combat expertise and then use a move action that means you lose your AC bonus. Is that correct?

Question about Combat Expertise in an intense high-level encounter:

To simplify there are 6 creatures in this fight.

The enemy is a Dragon that has #3 in initiative. The Dragon has the feat Combat Expertise. (p92 PHB)

Round 1: Turn #1 and #2 occurs. On turn #3 the Dragon takes a full attack action and it uses the Combat Expertise Feat with the action. Turn #5-6 occurs.

Round 2: P1 attacks and deals damage. P2 casts Final Rebuke (p 170 Spell Compendium). The Dragon saves the Will Saving Throw and P2 beats the Dragons Spell Resistance. The Dragon is now dazed for 1 round but it avoided ultimate death. (Correct me if I am wrong up to this point)

Thank you for any input!

Is there any way to attain Expertise with a Poisoner’s Kit?

My character is a Rogue, so I have the proficiency already, but I want to have Expertise with this tool if possible. .

This would give me the following skill proficiencies:

This is a total of 6 skill proficiencies, and with Bard level 3 and level 10, and Rogue level 1 and level 6, I would have 8 skills to put Expertise into. I can put one of these Expertises into Thieves’ Tools, but there is still one Expertise left to be used.

I’m running an arena-style fight between a lot of PCs. It’s now getting to the point that there are few enough PCs that they are beginning to take levels to counter one another.

One of the players is a Rogue. At lvl 11, the die roll for ability checks rounds up to 10 when they are proficient – for a rogue with a dexterity of 20 and expertise in Stealth, the minimum Stealth check is 23. Two levels later at 13, it rises to 25, and eventually to 27 at lvl 17.

The first situation is difficult enough for opposing characters, but by lvl 17, only Perception-proficient characters who have good Wisdom even have a chance of spotting the Rogue.

I know some of the casters have their own advantages in class features (Hold Person is pretty lethal), but those all require a save at least. The rogue can shoot from hiding every turn and re-hide, dealing several dozen damage and being near-impossibe to find.

Besides staying in open areas without places to hide, what could any other PCs do to have a chance at winning?

Both numerical and strategic considerations are appreciated. No UA or homebrew is allowed as a source, for obvious reasons.

We’re migrating our current intranet employee profiles to Sharepoint / Delve and so far a lot of it seems very promising and the Graph API is great. However there is one field in the Delve UI that I can’t find anywhere in the documentation on how to retrieve or set, but it must be somewhere since users can enter it.

It’s the field for “Expertise”, or Topics. Under the section “Skills and Expertise” it allows you to enter skills. These I know how to get from Graph API. Then the UI continues … “You can also ask me about …” To illustrate, see the image below. 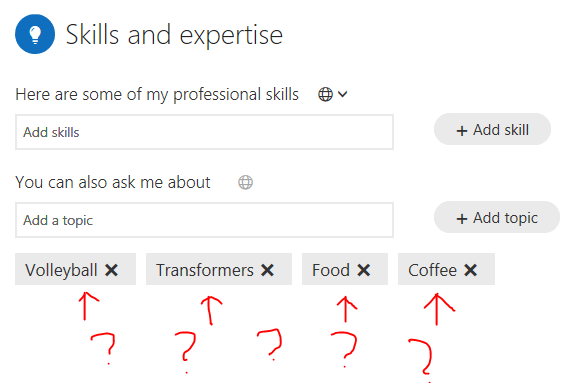 The values Volleyball, Transformers, Food, Coffee I can’t find anywhere with the Graph API. Can anyone point me in the right direction please?

My character has proficiency with an instrument, she also has expertise with in performance. I know the rules say you add and multiple proficiency once.

The RAW for instrument proficiency states

Your proficiency bonus is doubled for any ability check you make that uses either of the chosen proficiencies.

At first, I questioned if this meant I don’t roll a performance check for how well I played my instrument. Similar to how picking a lock has you roll dexterity + proficiency / expertise (but only if you are proficient in thieves tools).

This first link here, states that the GM decides whether they use performance or the tool proficiency, or the DM can allow the player to choose which proficiency to use.

But this second one here, states that the player uses both on the same roll.

They are both written by the same person. The RAW and the Sage Advice tweets from Mike Mearls seem to contradict themselves.

My DM and I tried to figure it out, but neither of us could come up with something that did not seem like making it too effective or too ineffective.

When playing an instrument, do you use your instrument proficiency bonus, your performance skill bonus, or both?

I asked this question a few months back, but it was closed because I could not correctly get across what I was asking about. Now I think I can.