Checking index fragmentation in my database seems unruly slow. Regardless if I use the DMV sys.dm_db_index_physical_stats (for a specific database, table, or even index) or if I use the SSMS Index Properties window to look at Fragmentation on a specific index, it takes a really long time.

For example, using the Index Properties window will take upwards of 5 minutes to open up for a single index on my largest (~20 billion rows) table.

I do want to push to implement partitioning but until then I have to support an existing index maintenance job and I’m not sure how we can even check index fragmentation when one index on our heaviest table takes about 5 minutes to analyze. (Each of our tables has at least a few indexes.)

Here’s a case where it took so long in the Index Properties window that I think it timed out and returned nothing in window: 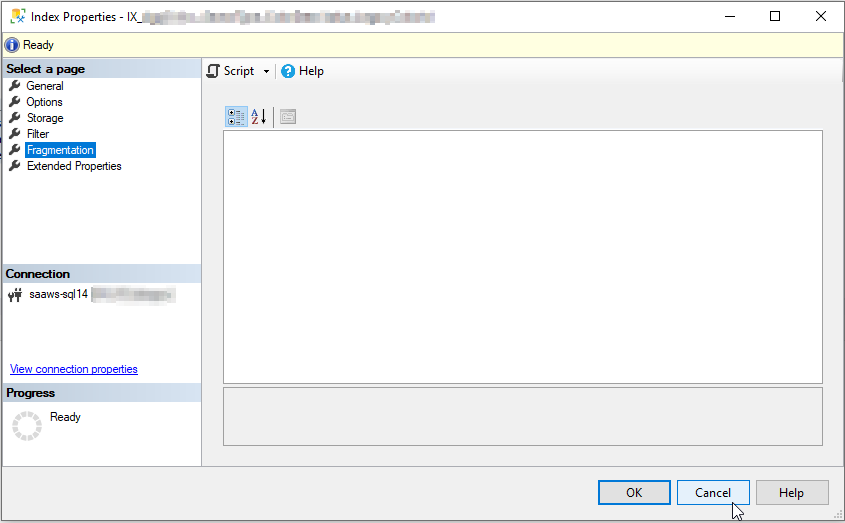 Is there external or internal fragmentation possible in Segment paging? If yes then how?

I have a segment with some offsets at irregular intervals

There are items of various length inside. Items cannot be placed randomly. Instead, their left side must match some offset.

Items are free to go past offests.

As you can see in this image, item number 3 is long enough that it goes through an offset, shown with a dotted line.

I also have some special type of offset that I’ll call “barrier” that items cannot go past and cannot be placed on:

One last constraint is that items cannot overlap each other:

Items can be moved one at a time. So I can pick up an item and place it somewhere else as long as no constraint is violated.

I’m trying to come up with an algorithm/solver/optimizer which would find some good enough sequence of steps to reduce fragmentation and compact up these items. It follows that this procedure will reduce empty space between items and offsets:

Can you give some suggstion on how you would tackle a problem like this or point me in the right direction, give some ideas, name algorithms to take inspiration from, etc..?

In one of the recent updates to Google Chrome, we have seen yet another method of dealing with page loading status with the introduction of the loading animation in the favicon area of the browser tab (by the way, the Firefox browser uses the side to side indeterminate loading state animation made notorious by LinkedIn).

As far as I can tell, this makes at least five or six different ways that you can indicate a loading status on a page, many of which occur simultaneously and makes the current state of the page content rather confusing for users.

So the ones that I have seen include:

Assuming that there is a ‘best practice’ when it comes to dealing with page content status, is there a reason why there needs to be so many different ways of indicating to the user that the status of the page is not completed loaded? Doesn’t this provide a very inconsistent user experience and add to the user frustration?

But before jumping into my questions, I want to first validate the assumption that designers are actively involved in the process of dealing with fragmentation issues with developers. Is it true?

It might be different among different teams and products, so I want to open a discussion and see how everyone practices in their work.

Thank you very much for your contribution!

I am currently studing questions but stuck on this one, I hope someone can help me out to understand.

Question: Assume that we have a paged virtual memory with a page size of 4Ki byte. Assume that each process has four segments (for example: code, data, stack, extra) and that these can be of arbitrary but given size. How much will the operating system loose in internal fragmentation?

The answer is: Each segment will in average give rise to 2Ki byte of fragmentation. This will in average mean 8 Ki byte per process. If we for example have 100 processes this is a total loss of 800 Ki byte.

My question: That 2Ki byte each segment is confusing but I think that is just a guess. Anyway, if we have 8Ki byte per process, that would not even fit in a 4Ki byte page isn’t that actually a external fragmentation? Can someone explain the correct answer that is easier to understand?

I have setup ZFS RAID0 Setup for PostgreSQL database. The Storage and Instances are in AWS EC2 and EBS volumes.

Previously the FRAG is at 80% on most the devices and we have suffered a heavy write IOPS. As the pool capacity is previously at 75% utilization (400GB), provisioned additional 10GB to each device (400GB + 80GB). Now the FRAG is reduced to 70%. Once important metric is that the write IOPS is much lesser for the same workload.

As per the Cloudwatch metrics after increase in EBS size, write IOPS drastically reduced to 1200 – 1400 IOPS from 4000 IOPS for Master PG and reduced to 600 IOPS from 3000 IOPS for Slave PG. I have suspected that this is due to how FRAG affects IO as explained in this answer.

I’ve been reading a paper by Robert Morris (“Sets, Scales and Rhythmic Cycles; A Classification of Talas in Indian Music”) and came across a formula that I’ve found a bit tricky. He is referring to the “fragmentation” of a distribution and includes the formula below without derivation or reference. I’m pretty new to statistics, so this may be a standard formula that I’m just unaware of. However, I haven’t been able to find it in the same format online.

I found the formula to be much more readable in this format:

Does this formula (or a similar one) have a name? Are there any places where I can find some further information? More generally, what does this mean?

Thanks for the help!