I am making an infinite procedural terrain for my game and currently trying to apply textures to it. The generated terrain has different biomes, so I want to texturize the terrain based on biome and have different textures applied based on the steepness and height of the terrain. I also have different areas generated, such as settlements and also roads so I want to apply specific textures to specific places like those as well.

Unity terrain only supports I think 8 layers, but generally, it should be around 4 for 4 channels? In my case I generate a custom mesh, so I don’t really need to worry about this, however, I am trying to figure out how to generate some sort of texture map (splatmap), and have lots of textures in it. I want to use (albedo, normal, height) for each ‘layer’. Considering that the biomes are generated based on the noise map and each chunk can have many different biomes in it, I need to have more than 4 layers available. For example, steep areas like cliffs will need to have a rocky texture applied and each biome will have a different rocky texture. So if a chunk has two biomes in it, there are lots of different textures that need to be used, including various misc textures for paths and settlement grounds, etc.

Something like this, where a single chunk mesh has for example two biomes. Also, the terrain has a settlement that has a dirt texture applied to the terrain, which extends to both biomes. So essentially, lots of textures in just one mesh. 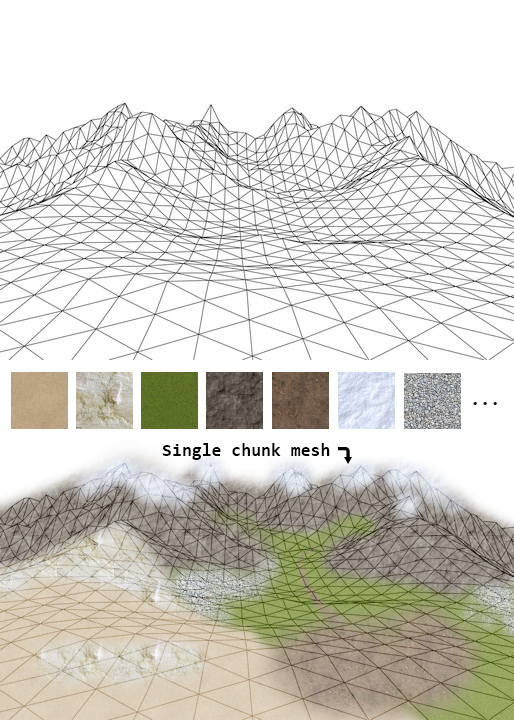 The other chunk(s) can have similar biomes or even completely other types of biomes. Also, would like to perhaps add the ability to apply different textures to a specific position on terrain chunk at runtime, for example, if the player would want to create a path or if a specific object is placed that would spread some specific texture around the object on the terrain. Something like this for example, where a placed tree has spread some leaf ground texture around: 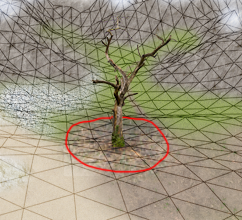 So, I am looking for a flexible way in applying various different textures to generated terrain mesh. I would like to do that in the script when I am generating a chunk, so I would know which biomes is it at the position and as well as things like steepness and etc.

I am using Shader Graph to create the terrain shader. I’m not really experienced with shaders, so would like to ask for some help on what would be the correct way to achieve something like this?

Is there a fast and reliable way of posting to a Custom Post type from the front end? My use case is for creating a daily checkin for a fitness trainer. I have created the necessary fields using ACF. And I was trying to create a front end post form using ACF Frontend for Elementor plugin. But in the plugin my post type doesnt show up at all. All in all I’ve tried various methods and I help with something concrete and reliable.

How is it monetized?
Customers can only use the premium version by reading each of our emails. This site is monetized through email marketing.

Does this site come with any social media accounts?
No.

How much time does this site take to run?
Everything is automated after you run ads to it. This is to gain subscribers for automated email marketing campaigns.

What challenges are there with running this site?
The only challenge I see is running ads in the…

FREE (yes. Just buy for $ 1 or PM me) Radio Generated from Live News Websites (from API)

How is it monetized?
Customers can only use the premium version by reading each of our emails. This site is monetized through email marketing.

Does this site come with any social media accounts?
No.

How much time does this site take to run?
Everything is automated after you run ads to it. This is to gain subscribers for automated email marketing campaigns.

What challenges are there with running this site?
The only challenge I see is running ads in the…

FREE (if you use ads to promote). All w/ Permission, Radio Generated from Live News Websites

However, the forms and the pages don’t look good. I would like to use bootstrap classes to make it look better. So I tried editing the Membership Levels page, but all I see is [pmpro_levels]

How can I edit the HTML code generated by this [pmpro_levels] code?

I’m working on an offline windows application that generates and loads key results as files. However, these files provide key insights into how our product works internally. To make matters worse my users will for sure be tech-savvy but not hacker like tech-savvy. So if I do not encode it, we give away our magic. So given this problem, I have some questions:

I need to send some automated emails from a program I’m working on. This is a new feature. I’m generating the emails now, but they get filtered by most of the email servers that I send tests to. Only one server I am using accepts the emails and it allows a lot of spam through. I need to find what headers or authentication or whatever I need to add to make the emails acceptable to major servers.

I’ve tried searching the internet for questions about sending automated emails, but the lead responses are all from companies that are willing to send the emails for me, or that are recommending what the body should look like.

How do I authenticate the email so that it doesn’t get flagged or filtered as spam?

Also, does length play any part in typical spams filters (i.e. are short emails more likely to be filtered)?

I have a question regarding "True Random".

I have a true random byte generated binary sequence produced from a QRNG hardware unit.

From this true random binary input sequence, I’ producing a new sequence by a pure description process of the binary input.

There is absolute no mathematical or algorithmic transformation of the binary input, the way we are producing the result is only based on the way we are describing the input binary sequence bit-per-bit.

Process Example (all the binary values are fake and only represented to illustrate the the case) :

My question is to know if we can consider the newly produced binary sequence as a real true random binary sequence because there is absolutely no transformation of the input, only a descriptive representation?

How to explain that this notion does not alter the TRUE RANDOM character of the entry?

What are the rules to respect to preserve the TRUE RANDOM character of a binary output and what are the operations that are authorized or not ?!

Thank you in advance for you support :)​

G is a context-free grammar in Chomsky normal form.

we define L(G) to the set of all derivation trees that formed by G.

Is it possible to create a non-deterministic bottom-up tree automaton that will accept L(G) exactly? if so, how to construct such automaton?

I think it’s true, so I’m trying to construct the automaton but having hard time to define specifically the transition function.

hope to get help.