At 14th level, your skill with magic items deepens more:
• You can attune to up to five magic items at once.
• You ignore all class, race, spell, and level requirements on attuning to or using a magic item.

The Thief Rogue’s Use Magic Device feature states the following:

By 13th level, you have learned enough about the workings of magic that you can improvise the use of items even when they are not intended for you. You ignore all class, race, and level requirements on the use of magic items.

While you hold the drawn sword, it creates an aura in a 10-foot radius around you. You and all creatures friendly to you in the aura have advantage on saving throws against spells and other magical effects. If you have 17 or more levels in the paladin class, the radius of the aura increases to 30 feet.

Since these features allow an Artificer or Thief Rogue to ignore “class” requirements when using the Holy Avenger, would they gain the benefit of the 30-foot aura?

Furthermore, since they also ignore “level” requirements when using the Holy Avenger, can they benefit from the 30-foot aura at 14th and 13th level, respectively?

Holy Weapon dismiss forever or just on your turn?

The DMG (p225) has the Holy enchantment listed as costing a +2 enchantment.

The MIC (p36) has the Holy Surge enchantment as costing just a +1 enchantment, and says:

A holy surge weapon functions as a holy weapon (DMG 225). In addition… (it does other cool stuff)

Am I correct in reading that Holy Surge costs less than Holy and does more? If not, what am I missing?

One of the players is a Life Cleric.

I’m thinking about giving the party a Sentinel Shield.

Since the Life Cleric is the only one in their party who can wield a shield, the party will almost definitely give the Sentinel Shield to the Life Cleric.

Honestly, the cleric is the main reason I’m thinking of giving it to them, though I recognize that they can do whatever they want to with it.

Here’s the question I expect will come up right away.

The cleric picked up the War Caster feat as soon as he could and then he had his holy symbol painted on his starter shield. The Sentinel Shield is described as having an “eye” emblazoned on it. I assume the eye represents the watchful alertness provided by the shield that results in the advantage on Initiative rolls and Perception checks that result when the shield is equipped.

Can the cleric paint his holy symbol on the Sentinel Shield?

On the one hand, it’s magical and maybe it can’t be easily defaced with paint, particularly not if the eye on a Sentinel Shield is what’s being painted over.

On the other hand, a divine holy symbol would be what’s being painted on the shield.

If it is doable, will defacing the eye with a divine symbol damage the watchful alertness provided to the user of the shield?

Maybe the cleric can paint his symbol on the non-Eye side, but isn’t that side still magical so that it can’t be easily defaced?

In a game I’m involved in, we’ve been offered the opportunity to request certain magic items that we’d like to encounter, including custom items. Taking the offer, I’m interested in something along the lines of a Holy Avenger, but intended for a Barbarian.

Comparing it to the source, is this proposed item balanced for a Legendary item?

You gain a +3 bonus to attack and damage rolls made with this magic weapon. When you hit a fiend or a celestial with it, that creature takes an extra 2d10 necrotic damage.

While you hold the drawn weapon, it creates an aura in a 10-foot radius around you. All creatures hostile to you in the aura or who enter the aura for the first time on their turn must make a Charisma saving throw (DC=8+Prof Mod+Con Mod) or have disadvantage on saving throws against spells and other magical effects. On a success, the aura does not affect the creature until the start of it’s next turn when it must save again. If you have 17 or more levels in the Barbarian class, the radius of the aura increases to 30 feet.

Referenced materials when considering the design of this included:

Compared to the effects of the Holy Avenger on it’s ability to sway a fight, is this proposed weapon balanced?

The description for the Emblem Holy Symbol is as follows (PHB, p. 151):

Holy Symbol. A holy symbol is a representation of a god or pantheon. It might an amulet depicting a symbol representing a deity, the same symbol carefully engraved or inlaid as an emblem on a shield, or a tiny box holding a fragment of a sacred relic. Appendix B lists the symbols commonly associated with many gods in the multiverse.

It weighs nothing and costs 5gp. The fact that it weighs nothing makes sense because it isn’t really an object that can exist by itself; it is an engraving or inlay on a shield.

So my question is, if you walk into a shop and “buy” an emblem (it costs 5gp, so it must be possible to purchase it), what exactly are you buying?

What I’m really getting at here, if I use my real example, is that in a game I am DMing, the party’s paladin (who has a shield with an emblem on it as per starting equipment) has raised concerns about having to buy a new holy symbol if they get a +1 shield in the future. This is unlike any other holy symbol, which you simply have forever (assuming you don’t lose or destroy it), since it is it’s own distinct object, so the emblem is a unique case here.

Just following the rules of what is required for a shield to satisfy the material components for spellcasting, I would say that they could just “buy” a new emblem and apply it to their new shield. But that got me thinking, what exactly would the paladin be buying at that point, and would it be possible to simply transfer the symbol over from their old shield to the new shield at no cost? This is a unique case, as for the other holy symbols, replacing some other piece of equipment would not impact them like this.

So, what exactly is an Emblem with regards to what a PC would be buying in-universe?

Note that I’m not looking for opinions, and if the answer is simply “this is not explained anywhere, as DM you have to decide what this means”, then that’s the answer.

The Oath of Devotion paladin has the Holy Nimbus feature at level 20:

At 20th level, as an action, you can emanate an aura of sunlight. For 1 minute, bright light shines from you in a 30-foot radius, and dim light shines 30 feet beyond that.

For instance, can it prevent a banshee’s Wail:

Wail. The banshee releases a mournful wail, provided that she isn’t in sunlight.

I’ve read that monk fist’s are considered monk weapons, does that enable a paladin to cast holy weapon on a friendly monk?

For clarification, I am not asking if an unarmed attack is a weapon attack. It is. What I am asking is if the hands are weapons, so that way they can be infused with spells like Holy Weapon, which only targets weapons.

i am a beginner with web design, while studying i came across the “holy grail layout” and i was just wondering why is it that the menu is vertically aligned while most modern websites tend to use a horizontally aligned menu. 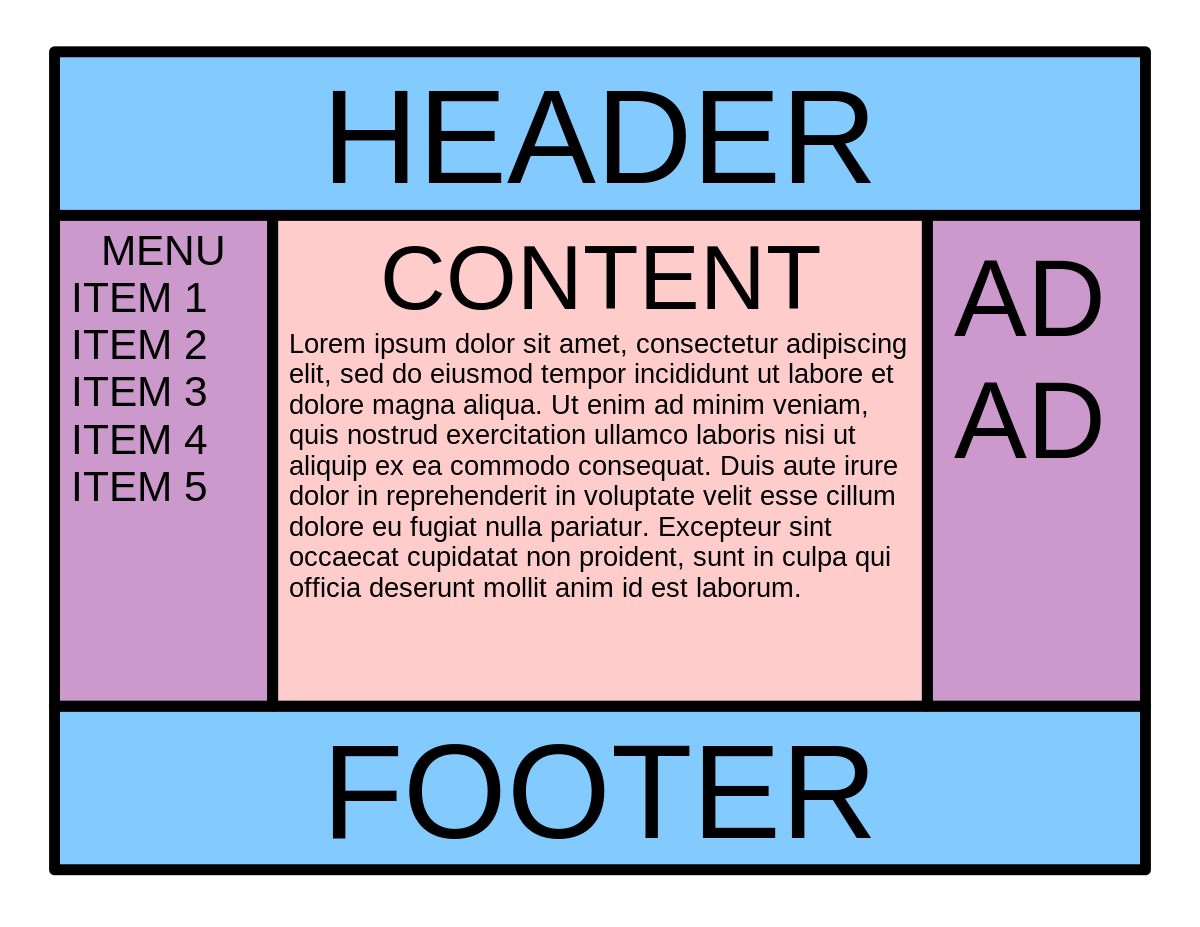 In the Player’s Handbook the section for holy water states (emphasis mine):

As an action, you can splash the contents of this flask onto a creature within 5 feet of you or throw it up to 20 feet, shattering it on impact. In either case, make a ranged attack against a target creature, treating the holy water as an improvised weapon. If the target is a fiend or undead, it takes 2d6 radiant damage.

In both Curse of Strahd and Storm King’s Thunder characters can find vials of holy water, not flasks. These could be used as a material component for certain spells, but can they be used a weapon like a flask of holy water? If so, how would the damage differ?

The Player’s Handbook also defines the capacity of a vial as “4 ounces liquid” and a flask (or tankard) as “1 pint liquid”. So could a character combine four vials to use as a weapon?