I have a question about the Insight mechanic. I’ve formulated this problem using D&D but the system is otherwise irrelevant, I’m just asking about idea.

How does insight work? Is it about expectations of players or actual situation (bluff or not)? Is it ok to lie in response to a low result as long as it’s what the player expects?

Let me present an example. Let’s say I have a paladin in my game who is evil (but the players don’t know that). He asks the players to kill some evil people, his servants. The paladin’s motives are to kill the servants because they were disobedient as well as kill players because they are threat to him. This request is probably suicidal because the players probably can’t accomplish the task. The paladin knows that.

One of these servants is cruel, bloodthirsty and totally opposite to the paladin’s behavior. After a fight with this servant, the players talk to him. He says that the paladin is his leader.

That seems absurd to the players, so they roll an insight check and get a 5, which is far below the DC.

The part of the True Strike spell I am concerned with reads:

Your magic grants you a brief insight into the target’s defenses.

I’d always considered this to be flavor text. But a friend of mine disagreed. He argued that this meant that the DM should give the player some insight into the target’s defenses.

For example, the DM might say “You sense that the dragon is fortified against fire.”

The thing is, I’m not sure he is wrong. Is this interpretation correct?

When I first heard of True Strike, I originally thought it was quite a powerful cantrip that would allow the castor to sacrifice 1 attack in order to be granted insight into the target’s elemental weaknesses and resistances. It reminded me of my first campaign when I walked into it at level 4 and felt lost hearing my DM state “your attack seems to have done nothing” even when I knew it was a hit.

However, realizing that was a false understanding of the rules, I was wondering if there was a spell that would give you such insight?

When you choose this archetype at 3rd level, you develop a talent for picking out lies. Whenever you make a Wisdom (Insight) check to determine whether a creature is lying, treat a roll of 7 or lower on the d20 as an 8.

So pretty straight forward question. Passive insight is 10+(prof+skill mod) which is better than 8+ from the ear for deceit. I’ve seen stated before in sage advice that passive scores were meant to be treated as minimum scores. 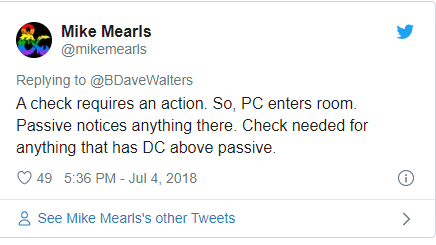 So really this ability has no use? At least nothing that I can really make out. Unless for some reason your passive insight isn’t applicable.

I have a party of 4 noobs, 1 is a pro on other games but new to 5e (like myself – but I haven’t played in years), 3 are actually playing their first characters ever. Ages run from 13 to 50 (I love a challenge).

I don’t like telling players what they can and cannot do if the rules do not explicitly state it, but I also hate to bash new characters for new player naivety. I also try to keep house rules to a minimum (just to make it easier for them to learn the basic rules). So I kind of “chose” to read the Passive Insight score as a social version of the Passive Perception which can “determine whether anyone in the group notices a hidden threat” (PHB Ch.8).

One of the PCs, a 1st-Level Rogue, was setting a trap for a Slaver Ship Captain & Crew to aid the City Guard. To add to the tension, I had the Captain make a snide reference to the human cargo as ‘commodities.’ The Player, morally offended, snapped back, “shut up you freaking idiot.” Caught off-guard, I asked for his Passive Insight and responded, “With your knowledge of the underworld, you know insulting him like that in front of his men will require a violent show of authority. You can say that, but are you sure you want to?”

A little later the same Player went to strike a final blow to a surrendering NPC while others were striking to incapacitate. I did the same thing, ending with, “Your character has been around enough to know that executing a defenseless man in front of the guard would be murder. They might not notice, or they might let it go, but maybe not. Do you want to kill him or knock him unconscious?”

I’m willing to let the Players do the wrong thing and suffer consequences, I just want them to know the consequences ahead of time. The worst part is that I already know the score – it’s on the inside of my screen along with his AC & HP, I’m only asking to make it come from his character’s mind instead of my mouth. Of course, I fear that come will across as passive-aggressively robbing them of agency – which is why I’ve only done that about 3 other times in 13 sessions so far.

My question is, am I actually within the rules by doing this?

Bonus question: Is this a actually a spineless way to force character behavior while pretending like I’m giving them free will?

Yesterday, I was in a D&D 5E group. Today, I am not. We were playing “Out of the Abyss,” but that’s redundant to my issue, I think.

Basically, the DM and I are interpreting Insight differently. He believes insight is used to determine if you believe someone or not; i.e. “Roll high, you can tell if they are lying or not. Roll low and you have no reason to not believe them (aka you believe them)”. Persuasion and Deception determine how well you make the character believe what someone is saying. In this case, it was a PC deception against PC insight.

A player character rolled for deception, saying it was deception aloud. I rolled low on my insight, therefore by DM logic, my character full-heartedly believes him without a doubt. I challenged him, saying that I don’t want to believe. However, since it was OOC revealed that the Player Character was under a charm persuading others to believe that the demon in the castle was a friend of his, my disbelief would be meta-gaming. Therefore I have no control over whether my character believes or not. My character believes in him because my insight roll was too low to tell he’s lying.

I wrote a whole essay on this arguing against his logic, but in the end, he stated “if a character cannot be persuaded/deceived into doing something the player doesn’t want them to do, deception and persuasion have no use. Meta-gaming would run rampant.”

What are your thoughts? Which interpretation is more accurate to the spirit of D&D 5E?

There is already a similar question, however the answers focus on that you should not tell players that they don’t believe the other but they should decided that themselves and only get hints. And while that may be true, it doesn’t actually answer the question posted in the title. I started to talk about it in the comments of the first answer but the discussion is too extended for comments. So here a new question.

In my specific case I have a new character x joining the party and he wants to help the party and tells them the town master is actually bad. The party has no reason to believe him. They ask for an insight check. Now what does x roll?

X is a charismatic character and I want him to be able to take advantage of that maybe via persuasion. But I don’t just want to contest the party insight with his persuasion, because I feel like a high role on either side should be rewarded by on one hand x showing signs of being truthful and the party reading those signs. I was thinking about adding both checks and taking an average against DC 10 but it seems a bit random.

I had bad result on Google Pagespeed Insight on small Magento Websites, using default theme and modifying only little stuff, plus adding static content to homepages.

And Pagespeed Insight rating are bad, more on mobile.

So I installed an empty 2.2.8 shop (no categorie, no product) to try to find out what I was doing wrong.

JS and CSS are minified, even HTML. I even installed a Varnish to be sure !

But PageSpeed Insight ratings are as bad as with modified Luma. (around 38-40)

So does anyone knows why default template got so bad ratings ?

Is there a way to improve it easily (I’m more of a backend than a frontend dev) ?

Do you know an ultra basic templates with good PageSpeed ratings ?

I am using bitcore explorer and I want to initialize insight api in testnet. It has the following code. I try var insight = new Insight('testnet') but it is not working. What value for url should i input so that Networks.get(url) === testnet

I’m running through Lost Mines of Phandelver with a new group of players. One of the characters’ backstory was that they were born to a noble family but were abandoned at birth (because they are a tiefling). Because the character was abandoned early, they do not know that they have this heritage. Now the nothic that the characters can face in Tresendar manor has the ability weird insight which states:

The nothic targets one creature it can see within 30 feet of it. The target must contest its Charisma (Deception) check against the nothic’s Wisdom (Insight) check. If the nothic wins, it magically learns one fact or secret about the target. The target automatically wins if it is immune to being charmed.

The ability contest suggests to me that the nothic is looking into the characters’ mind, but there is nothing stating that the fact or secret has to be known by the character themselves.

Does anyone know whether the nothic can learn a secret about the target, that the target doesn’t know themselves?