I have asked this question on Math Stack Exchange

Metric with singularities and associated Laplacian

but I have not got any answers/comments, therefore I post this question on the MO.

Suppose $ M$ is a compact Riemann surface, and $ g$ is a metric on $ M$ with finitely many singular points. For simplicity let us impose further restrictions on $ g$ , and we suppose in every local neighborhood with coordinate $ z$ , $ g$ is of the form \begin{equation} g=f(z)\overline{f(z)}dz d\bar{z}, \end{equation} where $ f(z)$ is a holomorphic function with a power series expansion \begin{equation} f(z)=\sum_{m\geq N} a_{m}z^m , N \in \mathbb{Z}. \end{equation} We say $ g$ is singular at the point $ z=0$ if the series expansion of $ f$ has negative powers. In particular we have excluded the case where $ f$ has an essential singularity at $ z=0$ . With respect to such a metric, we can still define the associated Laplacian operator $ \Delta$ on the smooth locus of $ g$ .

My question is, are there any results about the spectrum of such a Laplacian? In particular, is it bounded from below? References are welcomed.

Is there a version of Weyl’s law or a local Weyl’s law for eigenvectors of the graph Laplacian?

For some context, a colleague in statistics has encountered eigenvectors of the Laplacian for certain graphs. In her applications, the low frequencies correspond to large-scale spatial patterns, whereas the higher eigenfunctions tend to be localized (i.e. they are very small except at a few vertices) and oscillate rapidly. 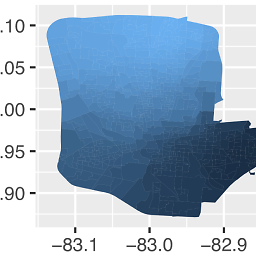 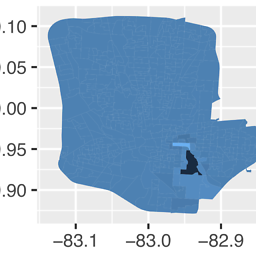 For an example, here are two eigenfunctions of the graph corresponding to block groups in Columbus, Ohio. The first corresponds to the principle eigenvalue whereas the latter is associated to a high frequency. For her work, the graphs are always planar, but may not be regular and are fixed (i.e. not expanding).

She asked me if I knew of a reference that rigorously formalizes this phenomena. I wasn’t able to find one, or even sure what it would be referred to in spectral graph theory. Does anyone have any recommendations?

In the continuous case on a compact manifold, this phenomena corresponds to some well-known results about the Laplace-Beltrami operator.

At higher frequencies, the fact that the eigenfunctions tend to be localized and oscillate rapidly can be proven using the local Weyl’s law and some estimates bounding the size of the nodal sets. For precise statements of these results, Professor Canzani has some lecture notes that include these results (see Chapter 8).

The issue that seems to prevent the direct application of these results to the discrete case is that the graph is fixed so there are only finitely many eigenvectors of the graph Laplacian. As such, it’s not clear how to apply asymptotic results or how to prove gradient type estimates on a space that is not smooth.