Hi Guys,
As We are Testing our new scraping system, We want to give Dropbox free access to GSA SER forum`s members.
So if you are interested in checking our site lists which are grouped by Platforms(Using GSA SER Platform Identifier) for free(No joking!) just PM me and send me your Dropbox Email.
I will add your Email in Dropbox in less than 12 hours.

– GSA Captcha Breaker Compatible
– Updating in Real-Time Using Dropbox (set once and forget)
– Dedupe Domains (Not URLs!) each 10 Minutes
– Scraping and Identifying around 1,000,000 Links Each Day 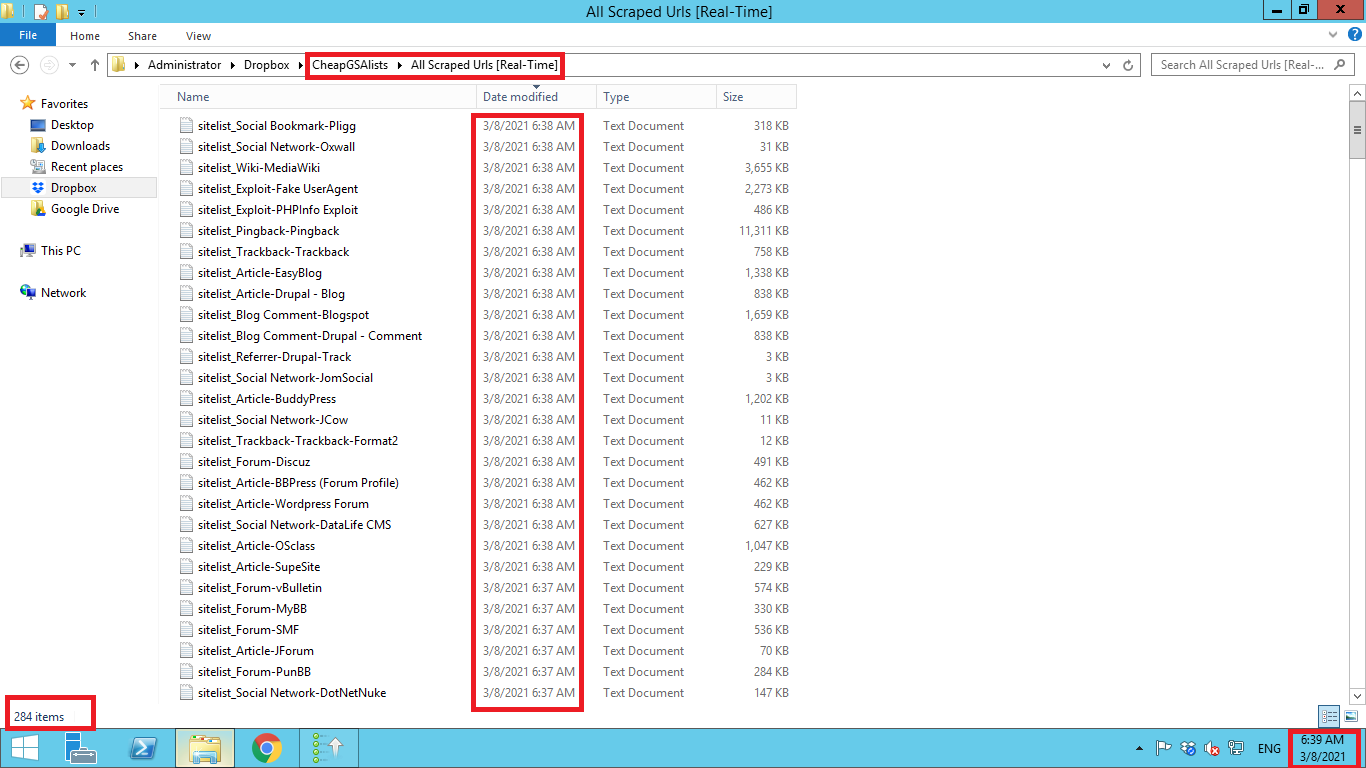 Note: ⚡If you are using our site lists, to get higher LPM & VPM, use “All Scraped Urls” and “Submitted Targets” Folders⚡

Currently we are working on Verified Targets and Contextual Targets(Added on 11 March. 2021) to increase the quantity and quality of those links. So it’s OK if these two folders are small. They will become bigger in two weeks. to get higher LPM & VPM in GSA SER take a look at above Note.

I have a Rogue-Arcane Trickster Lvl 10, Wizard-Bladesinger Lvl 6. I understand they use the other spell slot chart in the multiclassing section of the PHB. Now I know Arcane Trickster can only select Enchantment and Illusion spells. I also know you can add all spell schools in a Wizard’s Spell book.

I recently entered a Planescape campaign with a very rules heavy DM. I rolled stats in order, and now I have to make a character. As long as it stays within these sourcebooks and is neither a druid nor a full cleric (which my party already has) I’m open to options. Here’s the situation:

I have these options available:

I’m looking for ways to take the most advantage of this new ability from the upcoming Tasha’s Cauldron of Everything:

You entreat your patron to grant you a small wish. As an action, you can speak your desire to your Genie’s Vessel, requesting the effect of one spell that is 6th level or lower and has a casting time of 1 action. The spell can be from any class’s spell list, and you don’t need to meet the requirements in that spell, including costly components; the spell simply takes effect as part of this action. Once you use this feature, you can’t use it again until you finish 1d4 long rests.

Most of the spells with material costs or permanent/"until dispelled" effects I’ve come across either have a cast time longer than 1 action, or are level 7 or higher. So far the only spells I’ve found are Revivify and Continual Flame. What else am I missing?

I want to implement the below scenario: -Classroom course with a limit of 20 students in the class -Students can either pay weekly or monthly for this course -The important thing is that at any given time the students don’t pass 20 students.

I tried to implement this logic using LearnPress and Paid membership pro doing the following: -Created the course in LeanrPress with limit of 20 students -Created 2 membership levels for this course (weekly and monthly)

The issue is that for some reason when I buy any of the membership levels, the course student count doesn’t increment, so this leads to the possibility of buying more than 20 memberships.

Is there any other way (paid/free) achieving such logic ?

While making name-tags for a dinner seating, I stumbled upon a problem which I can’t find any algorithm to solve, and I’m not sure where to begin.

The goal is to write the name of each dinner guest on a card, completing one name at a time. The names are written with old-fashioned rubber stamps, so only 6 letters can be "active" at any given time. When a new letter is required, one of the active letters has to be swapped out for the new letter.

The problem is to sort the names in such an order, that I need to do the least amount of letter-swapping.

Example
I want to write the names:

I can do this with 3 letter-swaps
Initial letters: J A C K H U
Write: Jack, Chuck

Now I want to find an algorithm that, given a list of names and a limit of active characters, provide the order of names and which letters to swap at each name, to reduce the total amount of letter-swaps.

Any ideas or pointers are welcome.

We recently included an UA Revived Rogue subclass in the group and the players had to face off against a Rakshasa. The question is, Bolt From the Grave says it’s a Ranged Spell Attack, but doesn’t get cast with a spell slot.

Bolts from the Grave. At 3rd level, you have learned to unleash bolts of necrotic energy from within your revived body. Immediately after you use your Cunning Action, you can make a ranged spell attack against a creature within 30 feet of you, provided you haven’t used your Sneak Attack this turn. You are proficient with it, and you add your Dexterity modifier to its attack and damage rolls. A creature hit by this attack takes necrotic damage equal to your Sneak Attack. This uses your Sneak Attack for the turn.

While the Rakshasa has the following:

Limited Magic Immunity. The rakshasa can’t be affected or detected by spells of 6th level or lower unless it wishes to be. It has advantage on saving throws against all other spells and magical effects.

Previously I had decided that the Paladin ability to detect fiends, undead etc would work to find the Rakshasa (he has an amulet to hide his aura), so I feel like Bolts from the Grave should be effective. I was just wondering what the general thoughts would be on a ruling.

This is taken from an old exam of my university that I am using to prepare myself for the coming exam:

$ Goto$ here describes the set of all programs written in the $ Goto$ language made up of the following elements:

I am currently struggling with the formalization of a proof, but this is what I have come to so far, phrased very casually: For any given program in this set we know that it is finite. A finite program contains a finite amount of variables and a finite amount of states, or lines to be in. As such, there is a finite amount of configurations in which this process can be. If we let this program run, we can keep a list of all configurations we have seen. That is, the combination of all used variable-values and the state of the program. If we let the program run, there must be one of two things that happens eventually: The program halts. In this case, we return YES and have decided that it halts. The program reaches a configuration that has been recorded before. As the language is deterministic, this means that we must have gone a full loop which will exactly repeat now.

I have limited client devices and one server.

I want to create a client-server secure connection while app installation but don’t want human-interaction between devices and server like registration or login.

After installation app, this client device should be already authenticated.

In which way, I can implement this issue? I am newbie to information security. Please help me.

Warforged Juggernaut‘s Level 20 Daily Power is Crag of Steel; a stance that gives you a bunch of stuff, but the part of the power I’m interested in here is:

“Until the stance ends, you gain resist 5 to all damage, and whenever this reduces an attack’s damage to 0, you also negate that attack’s effect on you.”

The way I’m reading this, in order for this to kick in: an attack must do damage, which must be less than 5, AND also deal an effect.

An attack that just deals an effect isn’t ignored because the stance doesn’t “reduce the attack’s damage to 0″ – it already was 0 (or rather, there was no damage/null/etc.)

I can’t envision any other way of triggering the text in question;

At best, I can see it synergising with a handful of specific powers that otherwise reduce attack damage by mechanics other than resist, but those are few and far between (and generally reduce the damage by a not significant enough amount to negate 90% of a reasonable opponent’s damage.)(And my party hasn’t picked any of the dozen specific paragon paths/backgrounds that get them.)

Overall, this means, I can’t really see an occasion where this text would actually kick in. It’s good for negating level 1 creature’s attack effects if they happen to roll a 1 on their damage dice… as a level 20 Daily.

(Don’t get me wrong, the rest of the power is fine. Resist 5 is fine. Free damage is good. Resist forced movement is good. It’s just an unlikely enough confluence of events for that power to trigger that.. it feels like I’m missing something?)

TL;DR: Am I mis-reading this part of the Crag of Steel power or is it just not going to come up in normal level-appropriate fights?