I am confused over the web regrading few scripts on calculating the database size and free space within same.

Most of the scripts over the web uses sys.databases_files dmv to calculate free space like here and here

However if we see one from sp_spaceused or database properties via GUI amount of free space is different. I get the reason that it is diff as it has filter on type in (0,2,4) which excludes Log file.

But i am not able to understand which one is correct and why Log file is excluded from sp_spaceused or is it that scripts over web are not correct and showing something else?

I want to understand the workload of my stored procedures, which run on an instance with many other databases. Among other things I would like to know if I had my own server how many CPU core would I need and how much memory will be enough.

How can I measure how much memory is needed for my workload?

Barovia has its own calendar and measures its year in 12 "Moons" lasting a full lunar cycle.

The adventure text in Curse of Strahd mentions weeks. Does this mean the Moons are broken into 4 weeks of 7 days? Do Barovians call these weeks?

Most of the discussion about RNN and LSTM alludes to the varying ability of different RNNs to capture "long term dependency". However, most demonstrations use generated text to show the absence of long term dependency for vanilla RNN.

Is there any way to explicitly measure the term dependency of a given trained RNN, much like ACF and PACF of a given ARMA time series?

Thank you very much!

07-08: You cast fireball as a 3rd-level spell centered on yourself.

There’s other questionable area spells in that list (grease is a 10 foot square, so your square and which three?), but I’ll focus on spheres like fireball (PHB p. 241):

My problem is, the sources I found so far – including the other answers to similar questions here – talk about measuring spheres from grid square intersections, whereas this clearly talks about it being centered on the unlucky Wild Magic sorcerer. Plus, since it’s a wild magic effect, it doesn’t exactly have a caster that can pick a point of origin. Is there an accepted way to measure an effect like this?

Let’s say there is a data warehouse created from a shop data. A fact is a single purchase of a product. There is a dimension that describes a customer.

There is a need to create a measure that stores a number of distinct customers. Can this measure be created based on customer identifier in the dimension table, or it needs to be fact table? In which cases one or the other solution is better?

Below I post a visualization based on an AdventureWorks2016 database: 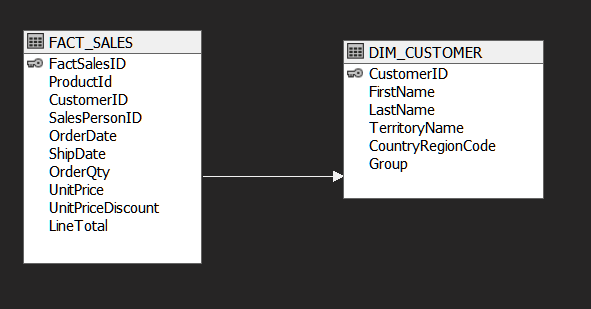 I recently got a VPS with Ubuntu on it, and I’d like to start creating a very basic website. However, I don’t know what steps I should take to secure this server.

I’m new with Ubuntu, new with security and new with creating websites (the website will probably be just HTML, CSS, Django/Python and some database).

I found the firewall information page on the Ubuntu website, but will that be enough ?

P.S.: If it’s impossible to give an answer, I’d also appreciate a book/website recommendation for Ubuntu and security complete beginners

I think one reason a compare is regarded as quite costly is due to the historical research as remarked by Knuth, that it came from tennis match trying to find the second or third best tennis player correctly, assuming the tennis players are not a “rock paper scissors” situation (but has an “absolute ‘combat’ power”).

If we have an array of size n being 1,000,000, we don’t usually mind comparing 2,000,000 times to find the second largest number. With the tennis tournament, having a Player A match with Player B can be costly as it can take a whole afternoon.

I’ve just attended an algorithm course, in which I’ve seen many sorting algorithms performing better or worse depending on how much the elements of an array are sorted already. The typical example are quicksort, performing in $ O(n^2)$ time, and mergesort which operates in linear time on sorted arrays. Vice versa, quicksort performs better in case we are dealing with an array sorted from the highest to the lowest value.

My question is if there is a way to measure in linear time how sorted the array is, and then decide which algorithm is better to use.

Reading into information security, I noticed two branches. Access control when communication with external device by using some type of cryptographic authentication and encryption mechanism and things like control flow integrity. My question is why do we need the latter if former is good enough. Are there example of control flow exploits on access control protocol implementation themselves? My focus is mainly on embedded devices.