The wording of ‘Sense Motive’ is pretty straightforward:

A successful check lets you avoid being bluffed (see the Bluff skill). You can also use this skill to determine when “something is up” (that is, something odd is going on) or to assess someone’s trustworthiness. (Core Rules, p. 104)

The issue I’m having is that failing a sense motive check isn’t outlined in the skill itself. The closest I can find is in the ‘Bluff’ check description:

Bluff is an opposed skill check against your opponent’s Sense Motive skill. If you use Bluff to fool someone, with a successful check you convince your opponent that what you are saying is true. (Core Rules, p. 90)

Due to the way the game I’m in is structured, most of the people that we meet are either hostile to us, or at the very least don’t want us to succeed. Furthermore, most of the people we interact with have absurdly high bluff checks, to the point that I can’t recall any of us successfully detecting a lie with ‘sense motive’ (despite us being lied to nearly constantly).

For instance, we recently had an encounter with a devil who we were sure knew the whereabouts of a MacGuffin. We also knew that this devil had a history of tricking adventurers by giving them bad directions that sent them into ambushes. So, we talked to this devil, and sure enough he gave us directions to the MacGuffin. The interaction then went like this:

Devil – “Oh yes, I know where that is. You just need to take the Winding Road, and make a left at the big gnarled tree. No one uses that path, it’ll get you there safe and sound”

Fighter – “I don’t really believe this guy one bit. I’m rolling sense motive to see if he’s lying to us. I rolled a 29”

Naturally, he wasn’t telling the truth, and we ended up getting ambushed.

The problem is that by deciding to roll a sense motive check, we basically forced ourselves to accept the results of the check instead of our own intuition. Since we know we have a good chance of failing the checks no matter how well we roll, it seems advantageous to us to make as few sense motive checks as possible. That way, at least we can have some chance of recognizing when we’re being lied to. In the example above, if we simply didn’t try to roll a sense motive, all of us would have been almost 100% sure the devil was sending us into an ambush, and we would have planned to go another way. However, since we tried to determine if it was a lie, we ended up failing the check and then believing that it was the truth, which put us in a much worse position than if we just hadn’t attempted to determine if it was a lie in the first place.

The Hunch option of Sense Motive seems like it tries to address situations similar to this:

Unfortunately in our game, I know that everyone we meet is not ‘trustworthy’, and that ‘something is up’ at all times. Knowing the devil isn’t trustworthy doesn’t give me anything useful; I know he’s untrustworthy, he’s a devil. However, sometimes you need to work with untrustworthy people, and in those times it’s important to be able to try to suss out what they’re being truthful about, and what they’re lying about. With Sense Motive the way it’s written, it seems like it’s better to not roll unless you’re almost 100% sure you’ll succeed, or else you’re going to be convinced that the lie is actually the truth, instead of just not being sure if you’re being lied to or not.

Is there anything official that deals with the limits of believing a lie? In my example, does failing a sense motive check mean you truly believe the devil is being honest, without a doubt? Does the failed check assuage any feelings of uncertainty you had about the situation? What should characters do when they’re pretty sure they’re being lied to, and they’re also pretty sure they’ll never be able to pass their sense motive checks?

I do not quite understand the construction of Voevodsky motives yet. Let $ k$ be a field (possibly not algebraically closed), $ X$ be a connected smooth projective $ k$ -scheme. Does the motive of $ X$ in the abelian category of pure numerical motives determine its Voevodsky motive? The coefficients are either $ \mathbb{Z}$ or $ \mathbb{Q}$ (the answer should address both). Please provide a reference.

I am trying to understand what motives a multi-billion dollar platform, that employs thousands of smart people to perfect its services, might have to make the decision to completely and utterly destroy the user experience.

I am talking about this stuff: 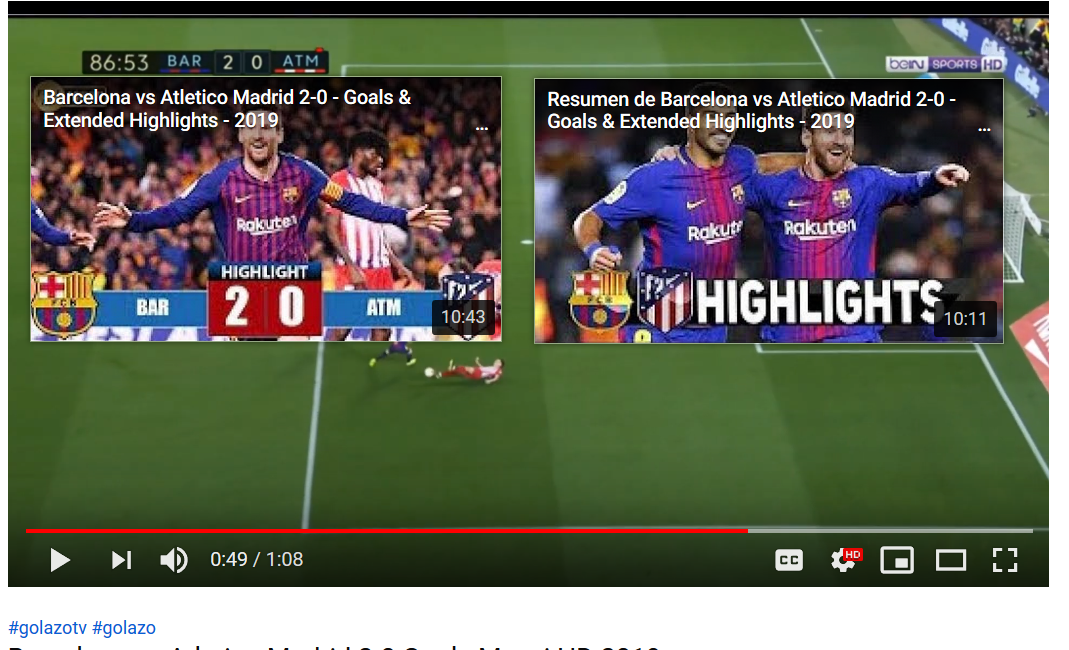 I’m trying to watch a goal by Messi. The video is 1 minute and 10 seconds long. We are at the 49th second now, and the video is literally blocking me from watching the goal.

What in the world is this? How can such an atrocious decision even be made, from any sort of logical standpoint? Why is Youtube preventing me from watching their own videos? Why are they intentionally making their own product worse?

It’s one thing if there was some button that I could click that said “tired of having your video blocked? Click here and pay some money and you’ll be rid of it!“… I mean, that would be a douchy move, but it would at least make some sense. But they don’t even do that, they literally just made their product worse without giving me an ability to change it.

Sorry, but I ALWAYS follow up on these mass shootings and the criminal who did them. I have a need to know his history. I CANNOT ACCEPT that someone so heavily armed and such a well planned and staged series of murders had absolutely no motive whatsoever in doing this. As though this was just circumstance or a joke.