With Forgotten Realms being the default setting for 5e, I am curious if there is the possibility for a necromancer, specifically a wizard, to be considered not evil:

I haven’t seen any rules specifically pointing out necromancers as evil, but going over the list of necromancers in the Forgotten Realms Wiki the closest thing to non-evil is someone who was impersonating a neutral character before they revealed themselves as evil.

So, would it be thematically reasonable to have a neutral or even good necromancer, interested in manipulating life forces without explicit malicious intent? Would it be possible to do the same, while summoning undead?

This might be a very easy question. Let’s consider cryptograhic hash functions with the usual properties, weak and strong collision resistance and preimage resistance.

For any given output, obviously there are multiple inputs. But is that necessarily an infinite number of preimages, for any given hash value?

How would I go about giving a formal proof that there exists no crypto hash function h() such that there is a given value v = h(m*) for which the possible set of inputs m* is finite? Would this necessarily break collision resistance?

Normally increasing the beam width is a better solution, but I have read that this is not necessarily true, is there any proof of this?

The problem exposing might seems trivial to you. It still isn’t clear for me which solution to choose.

Saying that you have a input text where you can type anything. Beneath it a list of ten element and a load more button. Once the user clicks on “load more”, ten more elements are added to the list.

My question is, when typing a text to filter, if there is 100 potentials results in the database, should we show the 10 first and a load more button or 20 ? since the user already clicked once on load more, we could expect him to want it to stay as is.

In some cultures red signifies stop and green go – stop and go can be considered opposites. Is it really different in other cultures?

But suppose I wanted to show a screen with only two buttons, possibly of different shapes, each for a different kind of action. So action 1 and action 2 are not opposites. Is it a good idea to make one of the buttons green and the other red?

First I thought how to tackle this problem. First I tried using a hybrid argument: $ |\mathbb P[F_{F_s(x)}(x)] -\mathbb P[f(x)]|\leq |\mathbb P[F_{F_s(x)}(x)] -\mathbb P[F_{f(x)}(x)]| + |\mathbb P[F_{f(x)}(x)] -\mathbb P[f(x)]|$ so I can contradict the possibility that the first part of the is not negligible but the second part of the sum is problematic. Then I tried to think of counter examples. But it seems to me that because I dont know what the key of F will be if I could break G then I could break F with one single query.. So i’m pretty stuck and would appreciate help.
note: by mistake I asked the same question yesterday from a user i don’t have access to so please refer to this one because the former is not relevant.

given a PRF F is G(s,x)=F(F(s,x), x) necessarily a PRF? (the first entry belongs to the key and the second to the seed). thanks

In my formal languages class, we discussed DIV, defined as following. DIV = { : a, b ∈ N and a has a divisor d for some 1 < d ≤ b} (<> means encoded, let’s say as binary) We were told that it isn’t known whether DIV is in P and were tasked to prove it was in NP. I naively and mistakenly assumed that DIV was in P because of the following algorithm: On input For all 1

However, i was told that this algorithm is not polynomial time with respect to the input. I don’t really understand this part. Something along the lines of since a and b are encoded in binary, the input is of order O(log n). And that means our b many divisions is actually O(b) * O(divisions), and that O(b) is 2^(log b). However, isn’t 2^(log base 2 of b) the same as b? How is that not polynomial time?

I am currently designing a timetable for a web app which will show appointments as they are scheduled.

Problem is, as I think that in order to make the user understand the scheduled appointment beforehand there is some important information that has to be displayed (Title, time, customer), appointments that are too short in duration will have to have a different width than the time they represent.

My question is, how do I make the user understand that the appointment’s width does not necessarily match the time?

I came up with this idea, but I think this still is not straightforward enough… 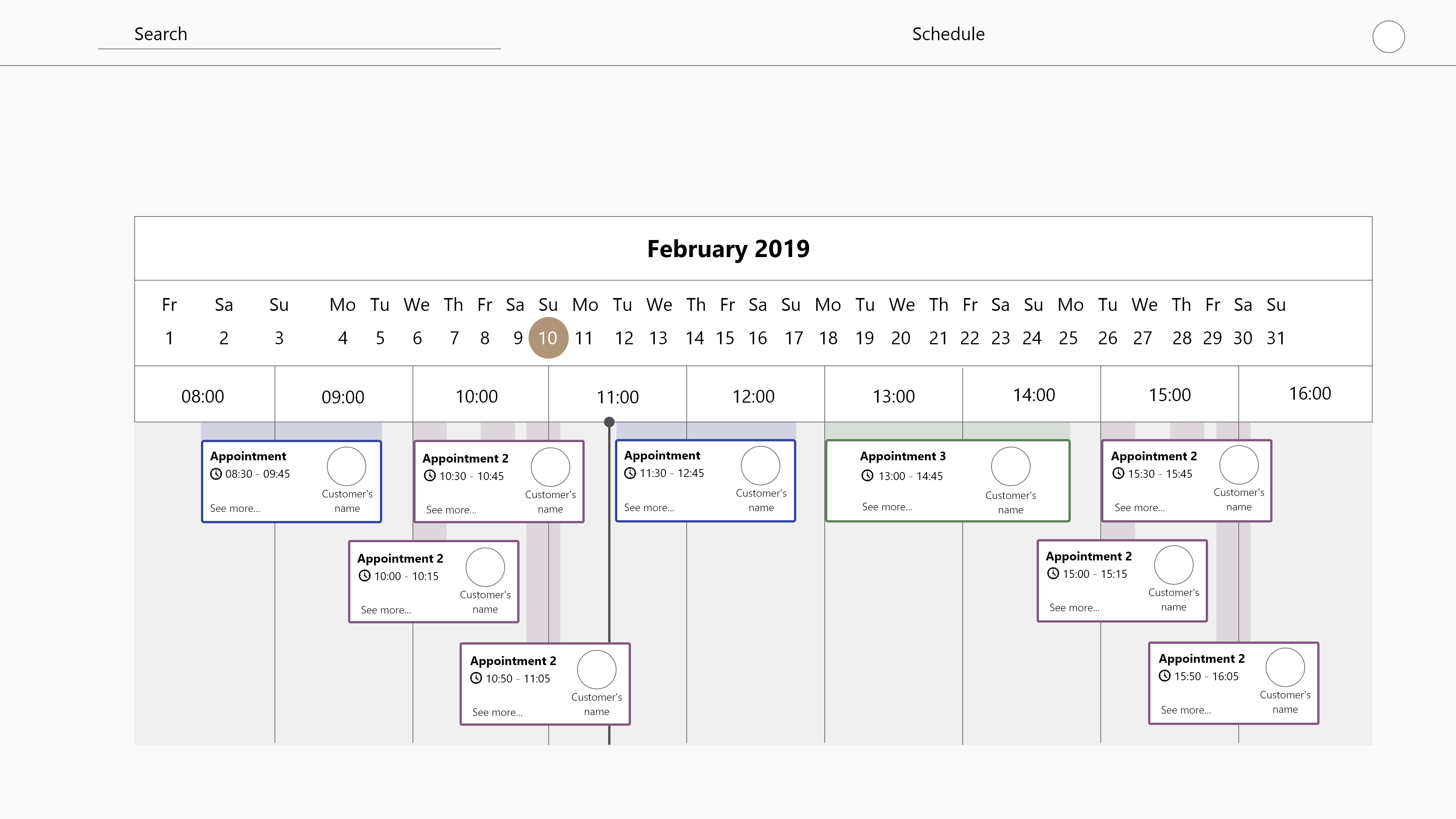 I’m open to any kind of suggestions!

Let $ u\in\mathcal{S}'(\mathbb{R}^n)$ . Suppose that $ u$ is also a measurable function on $ \mathbb{R}^n$ . Is it true that the Fourier transform $ \hat{u}$ as a tempered distribution is always a complex Borel measure?

But is $ \hat{u}$ a complex Borel measure under weaker assumptions on $ u$ , or none at all other than that $ u$ is a measurable function?