I paste this code to my functions.php

and this code to single.php:

The post view is working fine, but I would like to display on single.php if the current post views is more than 1000. Any idea how can i made it?

I want to display extra information below the post title only for the posts widget on the home page and not the portfolio widget. I’m using WordPress’ the_title filter to do this and that works fine, but at the moment, it shows the extra info in both the portfolio and the posts widgets. I need a condition to restrict the filtering only to the posts widget. The post widget’s class name is "home-post-widget"

Any help would be most appreciated.

my team and i are managing around 20 wordpress sites. Every site has a completely different setup (Themes, Plugins etc.).

Strangely, since 3 days, a lot of my colleagues just cant log-in to the sites anymore. They get in an infinite login-loop: Enter credentials, click on “log in” -> Site only refreshes. But for SOME users (that use the same login credentials) it works fine. Also logging in via mobile works -> So it must be PC related?!

It´s really strange, since we share logins and some work some dont.

Is there a clean and easy way to capture key combinations with Python only when the script being run is in focus (e.g. the Python intepreter/terminal or IDE window, no global capture)?

I’ve been trying the keyboard, pynput, and pygame.key for over two months, but none of these packages worked for me and some were an incredible mess to code with IMHO due to either a lack of documentation and bugs (keyboard) or too much overhead and unwieldy, convoluted classes/methods (pygame). Assume that you need to bind 50 different hotkeys – you don’t want to define a function with 10-20 lines of code for each key binding if e.g. a simple dictionary does the job. You also don’t want to be challenged to invent some god-level regex pattern for find & replace in order to write those 50 different functions if e.g. a simple dictionary does the job. You get the point.

It’s stunning that there doesn’t seem to exist a single Python package that offers a simple, concise solution for such a banal task that virtually any program that you are using right now is getting done. Try it: Alt+F4 will close your browser, but not some other applications that you might be running in the background.

I’m thinking about something along the lines of

If it’s not possible to limit the capture on one window, I’m also fine with having the callback pause the listener, e.g. while a certain very long loop is running and you need to write an e-mail in the meantime without accidentally triggering a core meltdown by doing Ctrl+C and Ctrl+V in Outlook.

I need to restrict the list of database for our users in a SQL Instance In order to move forward this I revoked the view any database permission to the user desired. But I figured out that only applies for databases owners so if you have access to a database but noy like db_owner even if for this user you deny "view any database". Keep listed the database on the instance

For example, a user who is not a member of the site sees the home address with the same address. And the user who has logged in to the site home page yousite.com/panel ,See

The issue is that building and deploying the dacpac to our database takes up most of our deployment time, when A lot of times, there are no changes to the database.

Is it possible to not have the dacpac build when there are no changes to the database?

I tried to search a lot but fail to get the solution. Only one I got it but that is also not completely working.

It is working perfectly if I will move to the subdirectory, which is also mentioned on wordpress.org but moving to the subdomain is missing.

On this site – Frontpage is working perfectly but the link to the other posts are not working well.

but the Question why some posting support ( this one showing )

this one show Image https://www.eitren.com/life-video/not-give-up-with-highly-hope-save-this-dog-in-the-hard-situation-but

this one Title only https://www.eitren.com/apps/hows-your-seo-brand-link-performance-in-serp-ranking

I have a few queries that I use to monitor log shipping. Sometimes I want to run those queries on a different server. I usually do that through a linked server.

ON SQLDEV4-TS I have setup Kerberos as per the picture below:

I have this query below that I use to test the connectivity to the linked server.

When I am on the server itself – SQLDEV4-TS – and I run the above script I get the following result: 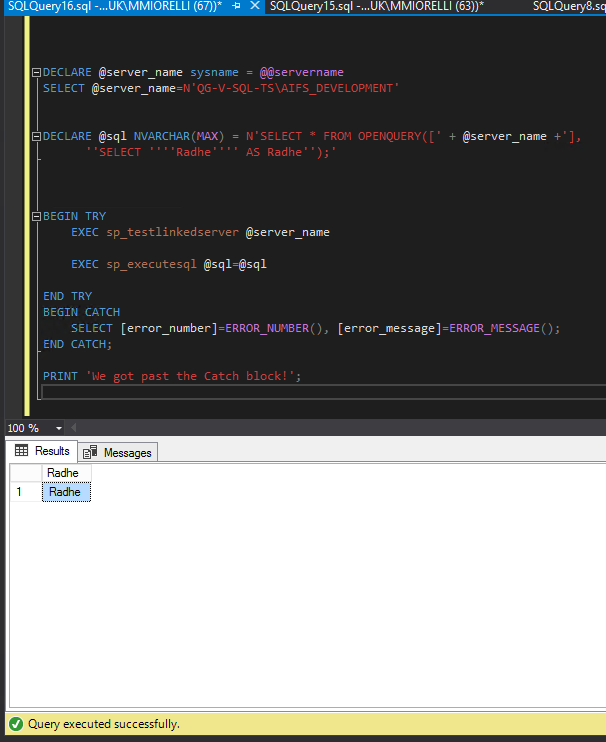 All good – it works as expected – no problem.

However, when I connect to SQLDEV4-TS from my local machine, and run the script (on my machine) I get the following result: 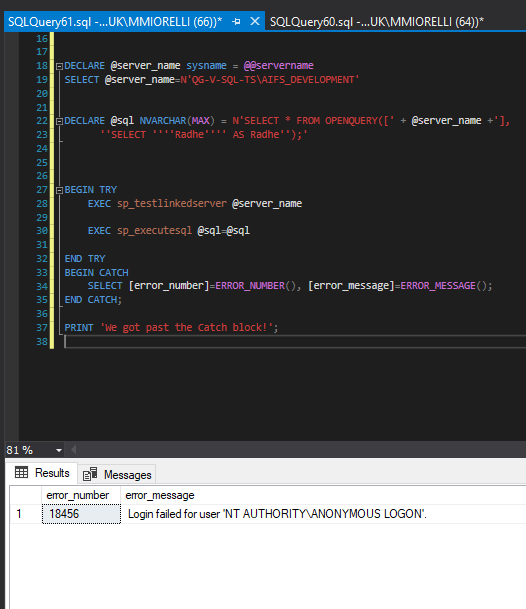 What is missing in this linked server setting, that I have to be on the machine itself for it to work?