Gravity’s a funny thing. It Makes all sorts of things fall and stay there. Does the pocket dimension in the Bag of holding have the same gravity directions as we do?

For example. I have a pile of china that I looted from a castle in 5e. I place it inside the bag of holding. I then shake the bag violently. Maybe I’m getting on a horse, and the horse doesn’t approve, maybe I trip and roll down a ravine, maybe I decide a bag of holding is an adequate juggling tool. Is my china destroyed?

Now onto the other meat of my question. Other people have asked if the Bags of holding can be escaped from, by opening the flap and waltzing out. Well… what happens if the Bag is placed upside down in a bucket. The flap can no longer open. They are essentially trapped until they die 10 mins later. What they think is up, actually isn’t.

These bags of holding I feel like make up some of the greatest debates, and most thought provoking concepts of almost any magical item. 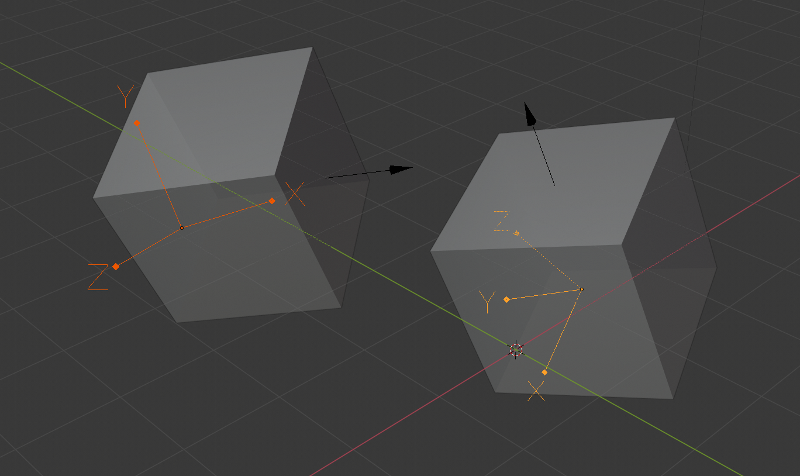 I am trying to build a custom coodinate system. To be more specific, the user chooses three points on screen to define the coordinate system. The first one is the origin, the second one is used for building the OX axis, the third one OZ and the last one OY. The system is corectly built. The axis are perpendicular to one another.

After this coordinate system is built, I need to convert the orientation and position of objects placed on screen from world space to this particular world space. In order to do that, I have tried the proposed solution from here 1. It seems to be working, but only for the position. The orientation seems to not change at all.

My question is how can I rotate the second cube accordingly? I have tried to set the rotation of the cube to be the orientation from the structure proposed in this solution 1, but it did not seem to rotate correctly. I have also tried to use Quaternion.LookRotation, but it did not work either.

1 How to create a custom set of coordinates based on two points in Unity?

I’m trying to solve this question.

Output: An orientation of G so as to minimize the maximum in-depth of any node.

So we have undirect graph G. We can create a directed graph by giving each edge direction. For example, e=(u,v) can be an edge from u to v or v to u. We want to minimize the max in-depth degree of any node for the new directed graph.

I’m trying to come up with a poly-time algorithm.

For example, I have one screen which has the text as the main subject of the screen. This font looks a bit odd on different devices when it doesn’t scale.

On buttons, however, the font looks fine without scaling.

Also, there are certain titles that look fine with rotations and others that look atrocious.

Are there any guidelines about which, if any bits of text, should scale and based on what (ppi, size of phone)? I know the common web standard is rem, but that doesn’t exist in mobile in certain cases (including mine).

This leads me to wondering if there is actually a default orientation for devices which is configured in the hardware, and if there is also some configuration of the software as well (and that they sometimes are configured to unintentionally clash).

Is there are default orientation in landscape view for mobile devices? And if so do they exist in hardware and/or software configurations?

I’m having an issue where pycharm can’t detect Super + O because it’s being picked up by gnome for the orientation lock shortcut. I can disable orientation lock in dconf editor, but the shortcut seems to remain there. How might I get that shortcut back? Thank you!

I need to create an algorithm that will output the number of self-crossings for an irregular orientation of an n-pointed star, whose vertices lie on the boundary of a circle. The sample input is as follows:

Where the first integer is n (the number of vertices), proceeded with n lines, each describing the positions of the vertices, taken in order, which form the star. Each vertex is in a unique position on the boundary of the unit circle, specified in degrees from the normal axis. All degree measures will be in the range [0,360).

The sample output for the sample input would be:

To tackle this problem, I was thinking of maybe separating the unit circle into quadrants and determine whether there are crossings depending on the positions of the vertices in their respective quadrants. However, I haven’t been able to think of a way to implement this.

I was wondering if anyone could provide perhaps a high-level idea or a push in the right direction which could help me think of an algorithm.

Holding one end of a 60-foot or shorter rope causes the other end to rise up until the rope is fully perpendicular to the ground. At the high end, a portal opens to an extradimensional space into which eight medium or smaller creatures can fit by climbing up the rope. The rope can also be dragged up into the space to hide the entrance and the portal itself is invisible.

Spells and attacks are unable to enter or exit the extradimensional space, but those within can see out of it as through a 3 by 5 foot window centered over the high end of the rope.

If everything inside the extradimensional space has not exited beforehand, it will fall out when the spell ends.

Our group has been playing under the assumption that the window is positioned vertical relative to the ground plane, because that’s the way most windows we see are positioned. This would mean that you climb into the hole as if on top of a cliff edge at the end of the rope and you then have a view of the world as if you’d be looking out of any normal building window.

However, this seems to be in contradiction with popular depictions on the internet.

The difference would be surprisingly relevant to some standard strategies we have been employing.

How is the Rope Trick portal positioned relative to the ground plane/gravity/the rope?

Currently we have the following camera options for the 3D preview of an object in our software.

I can imagine for some users that it’s hard to visualize in their head which part of the object will be visible. How can I make this more user friendly for the users? Should I put icons next to the options?