As I understand it, a ‘quantum ogre’ is a piece of game content that the party will be unable to avoid encountering. It’s a way of saving on prep time for the game master but that subtly removes player agency.

For example: when the party comes to a fork in the road, will they go left or right? This provides the players with the illusion that there is a meaningful choice to be made. However, the reality is that, whichever direction the party chooses the game master will decide that the ogre is (and has effectively always been) lying in wait on that path.

How long has the term ‘quantum ogre’ been in use and from where did it originate?

Could you please let me know how can we check the origin header server-wide in IIS to prevent CSRF through the configuration change only without adding a custom HTTP module in IIS?

I’ve always assumed that the goliath race are half-giants or pygmy giants or something like that. Something related to giants.

In the descriptions of the goliath race in 5e (in Volo’s Guide to Monsters and Elemental Evil Player’s Companion), it doesn’t actually mention the race’s origins, nor does it mention their relation to giants at all. It mentions that they know the Giant language and they are described physically as per the following:

Their bodies look as if they are carved from mountain stone and give them great physical power.

The rest of the description largely concerns their society and how they tend to think and act, etc, but does not elaborate any further on what they are or how they came to be. This may be because the descriptions are attempting to be setting-agnostic, so they don’t want to tie the race to their origins in the Forgotten Realms, but that leaves me with not much to go on regarding what the goliath race actually is.

I have heard that they are specifically related to stone giants, but since 5e doesn’t mention this, I’m unsure if this is derived from older editions of D&D or what? The Forgotten Realms wiki page, at least, mentions this under the “History” section:

It’s unclear how old the goliath race was or where they originally came from, but it was commonly believed that they were somehow related to stone giants or earth genasi.[8] Another origin story claimed that the first goliaths were humans who sought answers from their gods. These individuals climbed the Columns of the Sky mountain range to seek parley with their gods. It was said that the journey to the peaks turned the seekers into the first goliaths.[28]

Basically, what actually are goliaths? What is their race’s origin? Do they have any relation to giants in terms of “genetics†”? I’m interested in in-universe Forgotten Realms lore from any edition of D&D, not out-of-universe explanations for what might have inspired the designers to come up with the race.

† Note that “genetics” isn’t exactly the right term to use for magical fantasy universe races, but I use the term to make it clear that I’m not interested in the “relationship” between goliaths and giants from a social point of view; I don’t care what they think of each other, I’m only interested to know if goliaths are somehow derived from giants or not, in-universe.

I’ve been using CORS for a while and I think I understand it. But as far as I can tell, because the allow-origin header is provided by the server being called, which an attacker can control as they see fit, same origin policy cannot prevent an injected script from calling an attackers server.

Furthermore, by using my own server as a proxy, and spoofing headers, I can essentially make any HTTP call to any server in the world, regardless of their CORS settings.

Assuming an attacker can do whatever they want with their server, does this mean that same origin policy is dead?

I am wondering what risks there are if you have static pages on the same host that don’t trust each other. A key concept of Javascript and web security is the Same Origin Policy (SOP), which is also the reason why we need to avoid XSS. If there’s e.g. a blog on example.org with an admin interface on example.org/admin and an attacker can place some javascript on example.org/foo then the attacker can execute javascript that e.g. will create a new admin account or perform other actions on behalf of the admin. I generally understand how this is happening.

However I wonder the following: If the pages on example.org are all static, i.e. no forms that perform actions or endpoints that act on POST requests, does the SOP still matter?

I was thinking of attacks like: Can example.org/foo/ open example.org/bar/, but with manipulated content? This could be useful e.g. if example.org/foo hosts downloads that an attacker can manipulate or redirect. I have tried a few things, but I wasn’t able to perform such an attack. (One way might be ServiceWorkers, but they are path constrained, which limits possibilities quite a bit.)

And are there other attacks that one should care about in purely static scenarios?

As part of the definition of a cone spell in the handbook:

A cone’s point of origin is not included in the cone’s area of effect, unless you decide otherwise.

As an example, what would either case be for a casting of Burning Hands?

Could the caster include themselves? or does this mean that they can exclude the first square of the cone?

I’ve made a homebrew on the “Wild Magic” sorcerer, with less focus on “unpredictable” effects and more focus on “sudden floods of raw magic power”. I would appreciate any constructive feedback. Much of the flavor text stayed from the original phb Wild Magic.

Different sorcerers claim different origins for their innate magic. Although many variations exist, most of these origins fall into two categories: a draconic bloodline and wild magic.

Your innate magic comes from the wild forces of chaos that underlie the order of creation. You might have endured exposure to some form of raw magic, perhaps through a planar portal leading to Limbo, the Elemental Planes, or the mysterious Far Realm. Perhaps you were blessed by a powerful fey creature or marked by a demon. Or your magic could be a fluke of your birth, with no apparent cause or reason. However it came to be, this chaotic magic churns within you, waiting for any outlet.

Starting when you choose this origin at 1st level, your spellcasting can unleash surges of dangerous untamed magic.

When you cast a sorcerer spell of 1st level or higher, roll an additional d6. You take damage equal to your proficiency bonus unless you spend one sorcery point to prevent it. On a 6, give yourself advantage if you are making a spell attack roll, or disadvantage on the targets’ saving throws. If neither of those can apply, double the duration of the spell’s effects.

Starting at 6th level, your innate connection to magic itself allows you to sense its chaos in the air when a spell has been cast. The spell’s residue lingers in a 30 foot radius for 1 hour per spell level.

When you are within an area that has this residue, your spell attack rolls can critically hit on both a 19 and 20 and your Spell Save DC is 1 higher than it otherwise would be. This effect can only apply once per turn.

At 14th level, you gain a modicum of control over the surges of your wild magic. Whenever you roll your Wild Magic Surge, you may roll any number of d6 instead of just one. You take damage for each d6 rolled, and may spend one sorcery point to prevent damage from each die separately

When you see another creature within 30 feet of you casting a spell, you may apply your Wild Magic Surge to their spell as a reaction. You still take any relevant damage for this surge.

Beginnning at 18th level, the harmful energy of your spells intensifies. When you roll damage for a spell and roll the highest number possible on any of the dice, choose one of those dice, roll it again and add that roll to the damage. You can use this feature once per turn.

Note that currently I am reaching the conclusion that the damage should only happen and be preventable if a ‘6’ is rolled on a surge, and that the surge should be explicitly stated so that the “duration’ cannot be stacked. Let me know what you think about these changes.

I have an isometric diamond-shaped map. Currently my map origin is to the far left, instead of the top. I have attached a picture below. Green circle is where I want the origin point to be, however the red circle is where it currently is now. 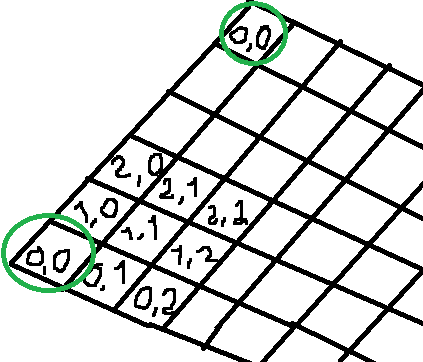 Basically when I walk up in my game, x coordinates increase, where I would want them to decrease.

It’s loaded with infile into a pointer of ints, from left to right, disregarding columns. The edges and corners of the map above, are sides and corners of tiles – the middle (9) is a grass tile, that is walkable.

Here is how I get map segments of x and y (Terrain codes according to tileset): https://hastebin.com/kehezeyami.cpp

If any more information is needed, please let me know, this has been bugging me for hours 🙁

Now and then, I’ve seen people use the term ‘Illusionism’, used for describing a kind of railroad, such as in this answer and elsewhere. I’d like to learn the origin of Illusionism, both in the sense of when/where/under what circumstances people started consistently using the term in RPGs, and in the sense of when/why/under what circumstances the phenomenon became widespread enough to be known and recognisable.

I’ve seen people point vaguely in the direction of the World of Darkness fandom and/or books as the natural habitat of the phenomenon in question. Is that where it originated? Was it part of some Storyteller advice, a common advice among some renowned GMs, both or neither?

How Can I Find The Origin Of Any Picture I Found Online?

for example, i got a picture from youtube, i save, then how can i found its origin? (where it originally uploaded)