I learned how to create a blueprint for making a character be able to pick up and drop objects: 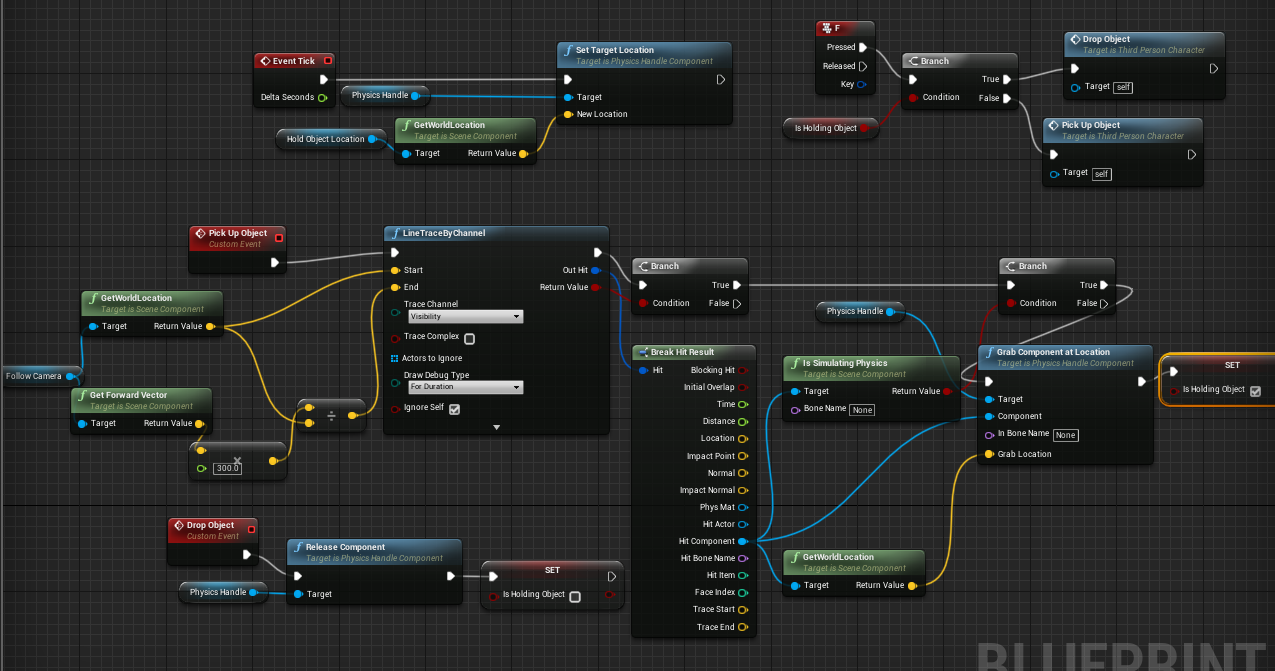 It did not work, and I believe the reason is because it was originally made to work for the FPS template that Unreal comes with. I decided to use the Third Person template, and I think that’s why it’s not working. Am I correct? What blueprint coding should I be looking at? What’s missing, or what’s preventing this from working? Thanks!

You create the image of an object, a creature, or some other visible phenomenon that is no larger than a 20.foot cube. The image appears at a spot that you can see within range and lasts for the duration.

At Higher Levels: When you cast this spell using a spell slot of 6th level or higher, the spell lasts until dispelled, without requiring your concentration.

I initially presumed this to mean you can create an illusion limited by the 20ft cube maximum size, and then the illusion can move within the original 120ft casting radius, with no option to leave it. But upon reading it again, it seems that if the caster is within range of the illusion, the character can command the illusion to move outside any initial range, and indeed can have the illusion follow the character around the map for miles. Is this correct?

This class feature seemed to me dead-on-arrival when published.

It’s unclear exactly what items originally presented in the DMG or PHB that this feature was originally intended to work with.

Extending this question to all published works would be too vast of a question, but this should be a reasonable ask.

Firstly, I will point out that I am only really familiar with D&D 5e and the video game Neverwinter Nights 2 (which is based on D&D 3.5e and set in the Forgotten Realms; incidentally, if the answer to this question would be different for different settings, assume Forgotten Realms).

In that video game (since the githyanki feature quite heavily, certainly in the first third of the game), one of the characters (Aldanon the Sage) claims that the gith were once human before the illithids enslaved them (see this gameplay video, 4:13):

Ages ago, the ancestors of the githyanki were human, and inhabited another plane of existence, where they were enslaved by the illithids, or mind flayers.

However, this is just a video game character, not a source book or similar, so this information is hardly credible. But this information may have come from somewhere credible, since I only know of the official information from D&D 5e.

Furthermore, it somewhat contradicts what D&D 5e has to say on the matter; from the Monster Manual (p. 158):

Before there were githyanki or githzerai, these creatures were a single race enslaved by the mind flayers. […] Whether these tall, gaunt creatures were peaceful or savage, cultured or primitive before the mind flayers enslaved and changed them, none can say. Not even the original name of their race remains from that distant time.

This seems to heavily imply that what the gith were before the illithids enslaved them is simply not known. Perhaps they were human? Perhaps they weren’t? The point is, we don’t know (meaning, there is no canon information).

I believe this is the most information we have about the origin of the gith in D&D 5e (since, although there’s a whole chapter on the gith in Mordenkainen’s Tome of Foes, it doesn’t seem to talk about much before their uprising against the illithids), so I’m hoping that earlier editions of D&D may have more information (according to the gith tag information, they go back as far as AD&D 1e, so there should be lots of lore to go on).

There is also this quote from the Forgotten Realms wiki’s page on the gith:

and although it does include references, I don’t own most of those books and therefore cannot verify them; also the quote itself is vague (i.e. “some sages claimed”, exactly where from Mordenkainen’s Tome of Foes did they extract that, because my reading of it doesn’t show up anything like that, although I was only skim reading it and may have overlooked something).

Finally, there is also this D&D Beyond video with Mike Mearls, where he also claims that the gith were once human (around 5:55), but I’d prefer to have that confirmed in a source book rather than just a passing comment by Mike Mearls (especially since it seems to contradict the D&D 5e Monster Manual, at the very least).

Is there any canon information from any edition of D&D to support the claim that the gith were once human before the illithids enslaved them?

In every edition of D&D before 4e, Paladins are required to be Lawful Good. If they stray from that, they are completely stripped of their powers. This means that evil deities can’t grant powers to paladins or if they do, they go into a new class (e.g. Anti-Paladin).

My question is: why? Why was it designed that paladins have to have such a strict alignment? It seems to me that it unnecessarily pigeonholes the character types and doesn’t make sense in D&D world. After all, couldn’t evil deities have (un)holy warriors?

I also don’t understand the mechanical decision about why was it designed that an evil Paladin has to be a different class. Wouldn’t this create a problem if you wanted to redeem an evil Paladin into a good one? This never really made sense to me until 4e where they just dropped the Lawful Good restriction entirely and let you have a Paladin of Vecna (or have that Paladin of Vecna become a redeemed Paladin of Pelor without having to switch classes).

I’m especially interested if the D&D designers ever wrote anything about their decision to make it this way.

I’m mostly looking for an answer on why the rules were designed this way, not reasons for why non-Lawful Good paladins can’t exist in the rules as they have been written by the designers.

Is this a novel introduction or has this been previously been introduced, and if so, where? More specifically, I refer to definitions of these given in section 5.

I’ll be flying to Chicago (O’Hare) in a couple of months and then taking Amtrak down to St. Louis. There are two trains I could take from Union Station. One leaves three hours after my flight arrives, and the other leaves nearly five hours after.

If I buy a ticket for the earlier train but miss it, can I take the later train?

If I buy a ticket for the later train but then get to the station early enough, can I take the earlier train?

What are Amtrak’s rules about this? (I couldn’t find information about same-day changes on their web site.)

There are no locks on the outside of my used 2003 Ford Escape other than the one on the driver’s side door. Should I just be able to buy and program a new key fob? It’s kind of a pain especially when you have groceries, etc. that need to go in the back.

However when I got to clear defaults it was not highlighted so I couldn’t click on it it’s very frustrating because I have a lot of tracks when I play them it’s my voice asking the Google Assistant something or talking to somebody it could be very embarrassing if somebody ever listen to one of these tracks , I I had nothing to clear and every time I talk into Google it says saving to my email address , maybe that is the problem it says” saving audio to my email” address please help me thanks

I was recently traveling on YRT’s Viva Blue rapid transit buses in the Greater Toronto Area, for the first time in a decade or so. One of the stops announced by the on-board system was Bantry-Scott, named for the two streets that meet Yonge Street there. This wasn’t the order I remembered from my previous visit: I recalled it being Scott-Bantry instead.

I’ve had a look around the internet, and haven’t found anything to corroborate my recollections.

Was this stop called Scott-Bantry circa 2006-2009, or am I simply mis-remembering things?