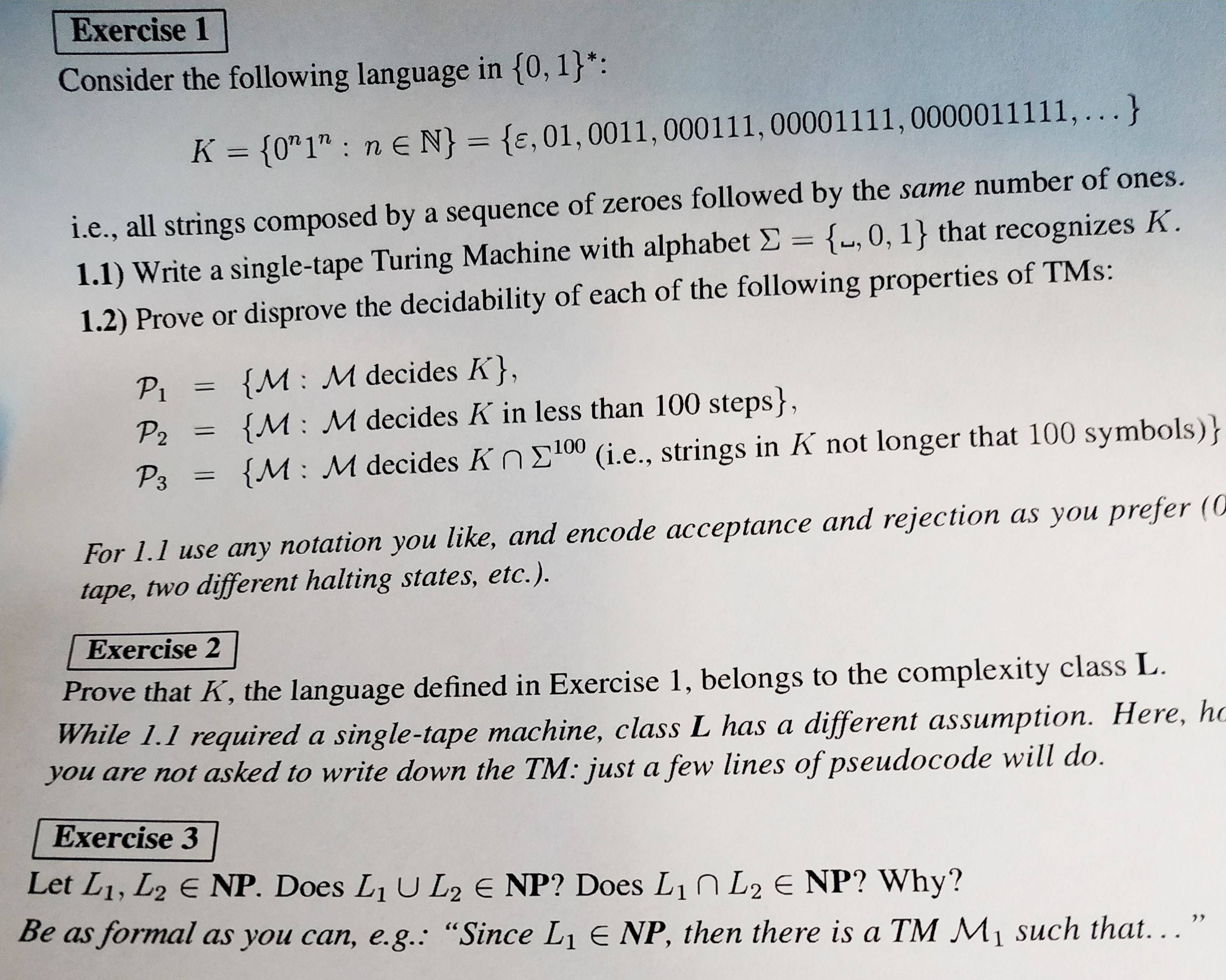 Can someone help me with these exercises and can you solve them? They are very difficult for me and even a little help would be very useful. (I’ve already asked in another stackexchange but I think it’s better to write here too)

thank you very much

The rules, as they are (if I imagine two humans having a fight) are better to describe someone grabbing someone’s arm, or by the scruff of the neck, which may prevent them from moving (unless they “break the grapple”), but otherwise doesn’t prevent them from doing anything else, because the Grappled condition simply reduces the grappled creature’s speed to 0.

If that is the player’s intent, then those rules work fine; you use an attack (not Action, just a single attack) to try to grab someone, with a contested check. If you win, now they can’t run away. That’s fine.

However, what about if someone wants to restrain someone? I can imagine it would be easy enough to grab around someone such that their arms are pinned to their body, making them effectively Restrained. However, RAW, there is no way the average PC can do this; they need to have taken the Grappler feat, and even then, it takes two attacks to do so (so unless you have Extra Attack or Action Surge, it takes two turns to actually restrain someone).

Since I don’t like these rules, I’ve tried to come up with something to make restraining a target more appealing, especially for new players for whom trying something like this might seem intuitive, but then the RULES get in their way. The amount of times I’ve seen a new player try to grapple the enemy, thinking it’ll actually do something, only to find that in practice it did nothing and the creature just attacked them anyway without penalty…

Anyway, my proposed house rules are that, on top of the existing rules for grappling, you can also:

The reason for the restriction on humanoid (or humanoid-like) is because I, personally, could give restraining another human a pretty good go, but I wouldn’t know how to go about restraining a dog (note: I do not own dogs, so maybe dog owners would know how to), let alone a Basilisk or a Spectator or something that one might encounter in the D&D universe.

Of course, this seriously nerfs the Grappler feat, so I’ve adjusted that too.

Given my proposed house rules, I hope that it:

Are there problems with my proposal that I’m overlooking that will make my new “Restrain” Action massively overpowered, or my revised Grappler feat massively over- or under-powered? I just want a sanity check on what I’ve come up with before it “goes live” in my games.

Is the following proof correct?

What problems does a university/college have that can be solved in the form of computer software development?

I am computer science masters student, i come from background of engineering and not cs, my problem is whenever i have a problem set, a programming task or an exam. i always try hard to understand the question and think for the right answers, but i usually either get stuck or have a wrong answer, and when i seek help i figure out i wasn’t completely understanding the topic of the question itself, missig some part of the information in or even having a wrong understanding to some parts.
So my question is, how i can approach a computer science topic “for e.g. operating systems” and have a good understanding with the right depth to have a better comprehension and to be able perform better at programming tasks and exams.

I will talk about my thought process behind array based problems and then explain my troubles with tree based DP problems.

My thought process for array problems

The way I think about DP in array based problems is as follows. Let us consider a problem like Minimum Path Sum. Here the objective is to get from the top left to bottom right positions in a matrix such that we minimize the cost of the path. We can only move left and right.

The way I would approach problems like this is as follows:

Hence I would come up with a n^2 time and n space solution. I can do this without any problems.

My thought process for tree problems

However I am having a hard time applying the same thought process to tree based DP problems. As an example let us consider the problem Diameter of Binary Tree where the objective is to find the longest path between any 2 nodes in the tree.

I can come up with a recurrence for this problem which is as follows:

Because f(n.left) for example is computed by doing 1+height(n.left.left) + height(n.left.right) I can tell that DP must be used.

So my approach would be to create a cache of size ‘n’ that stores all the heights of the nodes. So the space complexity would be O(n).

However the optimal solution of this problem has a space complexity of O(1) and I am having a hard time figuring that out just by looking at the recurrence. How does the recurrence tell you that space complexity can be reduced and that O(1) space is enough and O(n) is not needed? How do you know what value(s) to store in this case? In array based problems I can get the answers to both these questions just by looking at the recurrence but for tree based dp it is not so obvious to me.

I’m a player in a pathfinder campaign on Discord with 3 other friends, 2 players (let’s call them A and B) and the GM.

Last night we were at what seemed to be a boss fight, the scene was set up at our last session, 1 day prior, where the GM explicitly told us that if we wanted to plan something big, he would provide us with necessary non-magical items in our surroundings (for example barrels of explosive powder).
I explain my plan (involving said barrels, and a couple of other things going BOOM), player A proposed other plans but their’s had problems that my plan didn’t. Player B was silent despite my @mentions.

Finally, everybody agreed to try my plan. The fight began… and after the surprise round nothing went as expected as the BBEG won the initiative and throw a big stormy map control spell that wiped out all fire (no BOOM without fire) and throwing B and myself to the ground with no visibility.

As the party caster, I managed to teleport player B out of the spell area, but I was still in the middle of a 40ft radius icy-stormy-hell with no visibility. I was effectively out of the fight, leaving A, B and my eidolon out. I told A and B that they had to make the decisions now, because I was literally no more than a rolling piece of meat inside a fridge at the time.

Then 40 minutes of silence of player B, only broken by questions of player A and GM’s answers. But with no actions. The GM then made the statement that if they don’t play now, the BBEG will go forward. And then player B rage-quit

When our GM informed us that player B had rage-quit, we paused and tried to think about what happened. In fact player A and B were discussing what to do in private. The fact that the GM pushed the game forward upset her. We arrived at the conclusion that maybe the pace of the game was too quick, not letting time for B to give her ideas.

Pace is important in fight, but fun for all at the table is more important.
So how can we handle the situation at our level (player, GM, group), and what tools (on Discord) or tips (social) can we use?

I am trying to understand how can I prove various problems of CFLs and DCFLs are undecidable or undecidable.

For context free grammars $ G, G_1, G_2$ , how can I prove following problems are undecidable:

For deterministic context free grammar $ D$ and regular grammar $ R$ , how can I prove following problems are decidable:

Was I correct with my attempt? Also can someone help me out for problem 3 and 7?

I have a largish notebook (300 hundred pages when printed) that I have exported to PDF in the past (version 11?). I am having trouble with this in version 12.0. A PDF is produced (except once), but it will not display. In SumatraPDF, text does not display and graphics display with no text. In Acrobat, nothing displays and page errors are reported. I have other (smaller) notebooks that export successfully. Are there known problems with PDF export of notebooks? Size related? Diagnostic hints will be welcomed.

I´m having problems with this Context Free Grammar, I´m not able to convert the languaje from the photo to a Context Free Grammar, the mayor problem is how to pump both “sides” of the word to obtain same number of 0s and 1s, but, without creating series of 01010101, can someone explain to me a solution?