Now, I feel this needs some context. The place I am role playing at is on this sub-reddit called explore fiction. Its a nice little place where people can post the worlds they have built and role play with those that visit their world. The rules are as follows.

1.We are here to have fun and develop our worlds and characters, be civil.

2.No controlling other people’s characters.

3.No erotica, unless the entire post is NSFW (ex. [Scene] Jim’s Exotic Whorehouse.)

4.Follow the rules of the OP, if they say your character is too overpowered for the scene then tone it down.

5.Original characters and settings only! No fanfiction or established characters of any kind.

So obviously I feel that rule 4 is being broken a little. It is pretty inherent since the sub-reddit lacks any hard rules and is purely narrative. This has lead to power conflicts with those I have RP’d with in the past. Back in the day I would let them have their power fantasy and be done with it, but the longer I do this the more I think I need to address it.

Now the guy I am Role playing with is super cool and is relatively new, so I am not trying be a jerk about all this. Here is the conversation we are having on the topic so far. 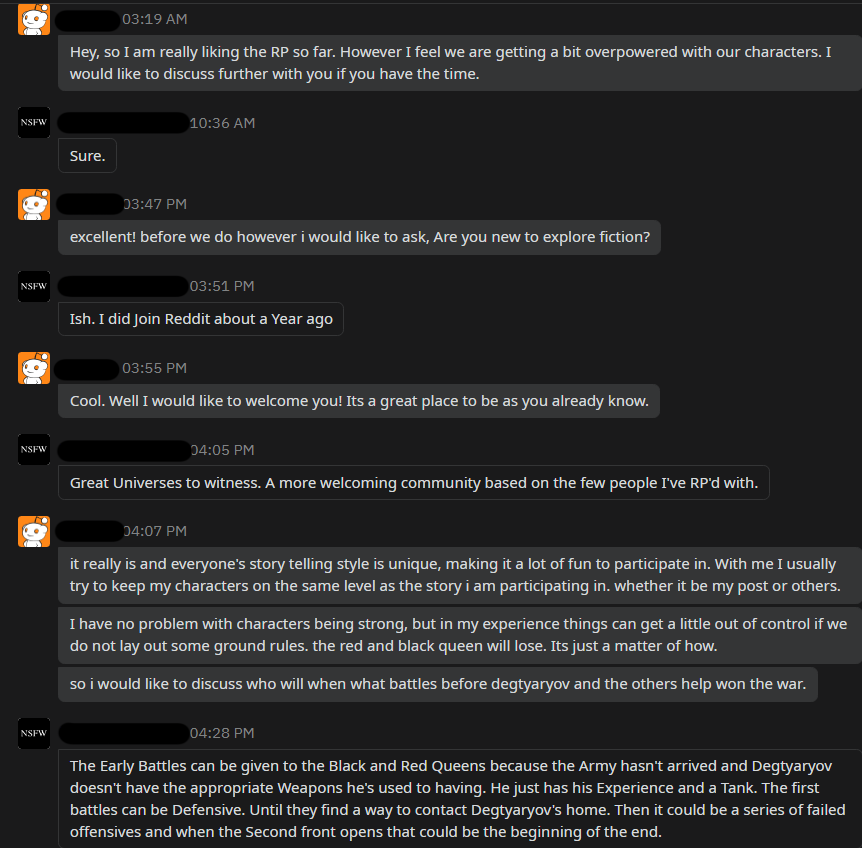 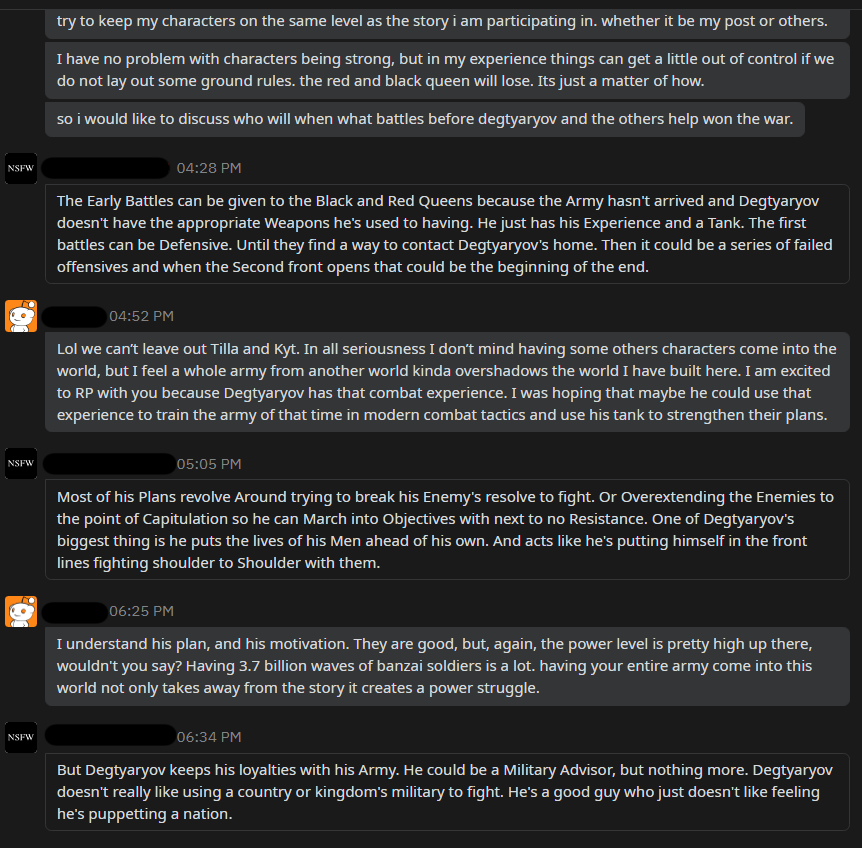 The Charger feat lets you make a bonus-action attack with +5 to the damage roll if you take the Dash action and “If you move at least 10 feet in a straight line immediately before taking this bonus action”.

When playing on a grid, am I correct that you would very often be able to move around the enemy to get this benefit, often without provoking an opportunity attack?
(On a 5-foot grid, excluding obstacles, there are a minimum of 8 squares within an enemy’s reach; from one diagonally adjacent square to the next are 3 squares.)

Assuming a standard point-buy and a very lenient GM who has given away a tremendous amount of gold of exactly one (1) infinity and allows any official Paizo books to be used, how many spells per day can a Druid reach in Pathfinder? You can use any Paizo-published material, but no 3d-party sources.

Before you ask, we are assuming a character who only has levels in the Druid class, and by “levels” I mean exactly one level.

Any external help (e.g. from a teammate) is not allowed; the Druid has to do their job themselves. Aid from any NPCs granted by any Druid option or by gold is allowed, though.

Things That Also Don’t Count because they are boring:

Essentially, the situation is that you can buy as much as you want before the “D-day”, when you can no longer spend gold and need to cast the promised number of times.

I need to reach IK Pass box, and control the weight by time from 1 to 0. I tried GetLayerIndex and did not give me any of those options.

In this question, I have been told the difference between a “melee attack” (which, if I understand correctly, Shoves and Grapples are) and a “melee weapon attack” (which they are not).

A Bugbear’s Long Limbed feature gives him 5 feet of extra reach for melee attacks made on his turn.

I’ve conceptualized a glaive-wielding EK, and the DM will allow for Variant Human, so I could start with a feat. Regarding the stacking of Polearm Master (PAM), War Caster (WC) work and Spell Sniper (SS) feats, from the information I received on a previous post, the consensus is that combining the three will allow you to cast booming blade in place of an opportunity attack when an enemy enters or exits your reach of 10 ft.

From a damage point of view, using the cantrips as the main source of damage, I will not allow me to use the PAM bonus attack. That is until level 7 when I use the cantrips until Level 7 where EK gets War Magic

Beginning at 7th level, when you use your action to cast a cantrip, you can make one weapon attack as a bonus action.

However, using my action to cast a cantrip, I will also be losing the Extra Attack (since I will not be able using the Attack action). Moreover, scaling past level 10, I will lose even more Extra Attacks.

A.) Is that how Extra Attack and War Magic interact? In that regard, is it worth becoming an Eldritch Knight?

B.) Other than thematically, does it make sense in terms of damage to use 3 feats for what appears to be a less than synergistic character, between normal attacks, cantrip attacks and extra attacks?

C.) Should the natural progression be level 1 PAM, level 4 SS and then level 6 WC?

D.) Would it be better, in any way, to create a Hexblade Warlock instead?

Can a character jump vertically (with range 3 + strength modifier) to reach a flying enemy?

Or, is it impossible to combine a vertical jump with an attack?

According to the Pathfinder SRD:

When measuring distance, the first diagonal counts as 1 square, the second counts as 2 squares, the third counts as 1, the fourth as 2, and so on.

Does this mean an opponent can step inside my reach without ever stepping in a square I threaten and thus never provoking an Attack of Opportunity just by walking down my diagonal line?

If my character, a medium-sized creature, were to drink a potion of growth, would his reach with a weapon increase?

This is inspired by the question “Does a Stone Giant get an attack of opportunity if I move only 5 feet away from it?”. The question ” Can a monster with no melee attack make an Opportunity Attack?” (as well as the Sage Advice Compendium) establishes that monsters do have unarmed strikes. I’m wondering then, how to determine the reach of this attack, if one exists at all.

Is there a rule somewhere that explains how the reach of an unarmed strike should be determined for creatures such as the Stone Giant whose only melee attack has a 15-foot reach? Or creatures like the Kraken who have multiple melee attacks with different reaches? The previously linked question also mentions the Flameskull which has no melee attacks whatsoever.

Is there any way, provided in the rules, to determine the reach of a given monster’s unarmed strikes?