I have a graph like this that starts from one top node and has cycles: 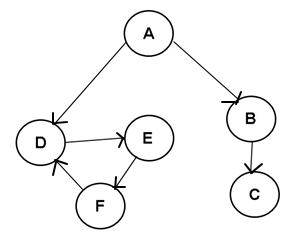 I need to write an algorithm to figure if node1 depends on node2. The most primitive algorithm I’ve written simply starts with node1 and recursively follows all available edges looking for node2 starting from node1. It’s very inefficient because I traverse the graph over and over again. I’m wondering if there’s an algorithm I can look at that caches nodes and dependencies it already walked through so that I don’t go through paths I’ve walked once and can figure if there’s a dependency or not from cache?

For example, if I’m given node D and the question is whether it depends on node F, I’ll walk D->E->F, and when next time I get the question if node E depends on F, I’ll get that from cache without walking the graph.

Thanks for any ideas and suggestions! 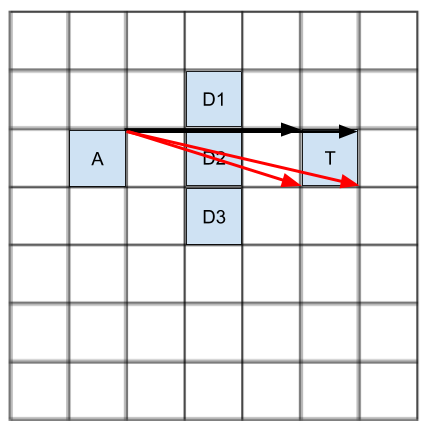 Willem Renzema’s answer to "Can you Investigate the same room twice?" and abalonemacaroni’s answer to "I failed to open a lock. Now what?" seem to lean towards the idea that if an ability check can be repeated indefinitely given enough time, a drawback should occur on each failed attempt to offset that.

But how can I resolve a repeatable skill check when there’s no time constraint or clear drawback from repeating it?

For example, making a History check in a library, lockpicking a safe that you’ve already stolen and brought back to your hostel, or making an Investigation check on an emptied dungeon, etc.

Basically, it feels like they are going to succeed in both cases, and the roll looks useless.

1 captchas supports Recaptcha2. But in the integration of api in GSA-SER there is nothing about recaptcha in this service.

I want to hire him as the third and last of the solvers, basically because he solves texts, but it’s fine that he adds recapcha2 and so if anyone passes from capmonster he would get there. I will leave 2captcha.

My question is, if the configuration with api that is in GSA-SER will also send you the recapchas, I hope you update it if necessary

I use Minions in my 5E campaign at times. I use them as canon fodder and their hit points are non-existent. Meaning, they have an AC of X and if the PC lands any hit, they are dead.

(I read that in 4E that Minions had only 1 hit point.)

What are the ways I could resolve the Sleep Spell action if the PC’s snuck up on a campsite or cave with multiple Minions who were unaware of their presence?

Looking for Rules as Intended. (only because I don’t believe their is RAW)

Can I use Wireshark to see what websites are visited on my network? I’m just looking for the domain name, and not a full url or any credentials. Would I need any additional tools such as sslstrip to see this? Would getting the DNS query be easier?

Thank you in advance for any help.

When I run OWASP ZAP, it gives me an alert with the following description.

Potential Format String Error. The script closed the connection on a /%s

But when I remove @maxlength="30", the alert goes away.

Is it just a “potential” error and nothing to worry about because it’s in C#? Or.. if this is something that needs to be taken care of, what can be done to resolve this alert from OWASP ZAP? (I’d believe removing @maxlength is not a solution).

It is said that you can give a story a more satisfying and powerful ending by simultaneously closing multiple story arcs at the end of a story (per screenwriting coaches like Robert Mckee – the teacher who inspired Peter Jackson to rewrite Lord of the Rings into what we saw onscreen.) For example, it was recently reported that the writers for Star Wars: The Rise of Skywalker found 24 unclosed character arcs that they could close with the final movie. They closed those arcs to give the movie more narrative impact.

I have been brought in as a substitute DM to finish the last 2-3 episodes of an almost eight month campaign of Tomb of Annihilation spanning over 30 sessions. (I was chosen to help maintain continuity because I am a former player with knowledge of their campaign.)

It would be great to give the ending of TOA a great sense of closure and feel epic as if the PCs have accomplished something important and the world recognizes it.

But, reading ToA it is clear that there are a variety of unclosed story arcs. As written, the ending feels a little abrupt. There are a few comments about how if the PCs saved a particular character then they receive treasure as promised and a few words about future adventures, but that’s about it. It feels a bit unfinished – like Star Wars: A New Hope might feel without the throne scene or Return of the Jedi without the scenes of celebration across the many planets.

The ToA authors left a variety of open story arcs for the DM to close.

That said, there are hundreds of pages of adventure – and clearly the authors opened a variety of arcs, many of them closed, and some portion left open – but it can be a challenge to find and remember all those arcs even having been a player.

It would be great to have a list of those unclosed story arcs so we as DMs can create scenes to close those arcs to help give that more satisfying “Mckee-an” sense of completion.

So the question is, what are the story arcs that are opened in ToA’s story that were unclosed in the module?

We are looking for a bulleted list of opened arc story elements that the authors left unclosed or for which the authors didn’t outline the scenes for closing them.

I am very much a novice to coding with no background on this at all so the code you see here may be terrible.

Basically I’m making an endless runner, made up of a player character and a set of obstacle prefabs. The obstacle prefabs have a trigger on them so that when the player hits it, it spawns the next prefab. I’m using the code below, and when the player hits the first spawn trigger it will spawn a prefab, but on tripping the next trigger it gives me the ArgumentOutOfRangeException error in the console and doesn’t spawn anything.

If anyone can point me in the right direction I would really appreciate it!