I’m trying to parse a Skyrim SE save file, in order to determine where specific items, say Alchemy or Smithing ressources, are located in my containers in the world.

I have been able to parse REFR Changed Form most of the times: ChangedForm.formId = 00002A68

What I don’t know is how to determine what container this inventory is for, and where it is.

Can someone help me find the correct path to the information I need?

I am building a "multi vendor" type plugin to extend Woocommerce. There will be two types of new user roles: Vendor, and Non-Profit Org.

Vendors can list their products on the site, and users can choose at the checkout page which "Non-Profit Organization" they would like to donate part of their purchase to.

Ultimately, I would like the site owner to be able to have a curated list of all transactions, meaning how much is going to the Non Profit, how much goes to the Vendor. Preferably in chosen increments (monthly, daily, by individual order).

What’s got me stuck is figuring out how to let the "Vendor" and "Non Profit Org" accounts VIEW their respective transactions as well.

I don’t know if I should make two custom post types (Vendor Orders, Non Profit Orders) and just list extra info as Post Meta, as well as finding out a way to make sure ONLY the user assigned to the role can view orders for that role (in other words, one non profit can’t see records of another non profit).

I have read a bunch of tutorials, added pixel perfect to my main camera, set up a target resolution in player preferences, set the pixel in a unit to 8 pixels everywhere, but still cannot make heads or tails of how it actually works.

Here is an image of my scene with my camera selected: 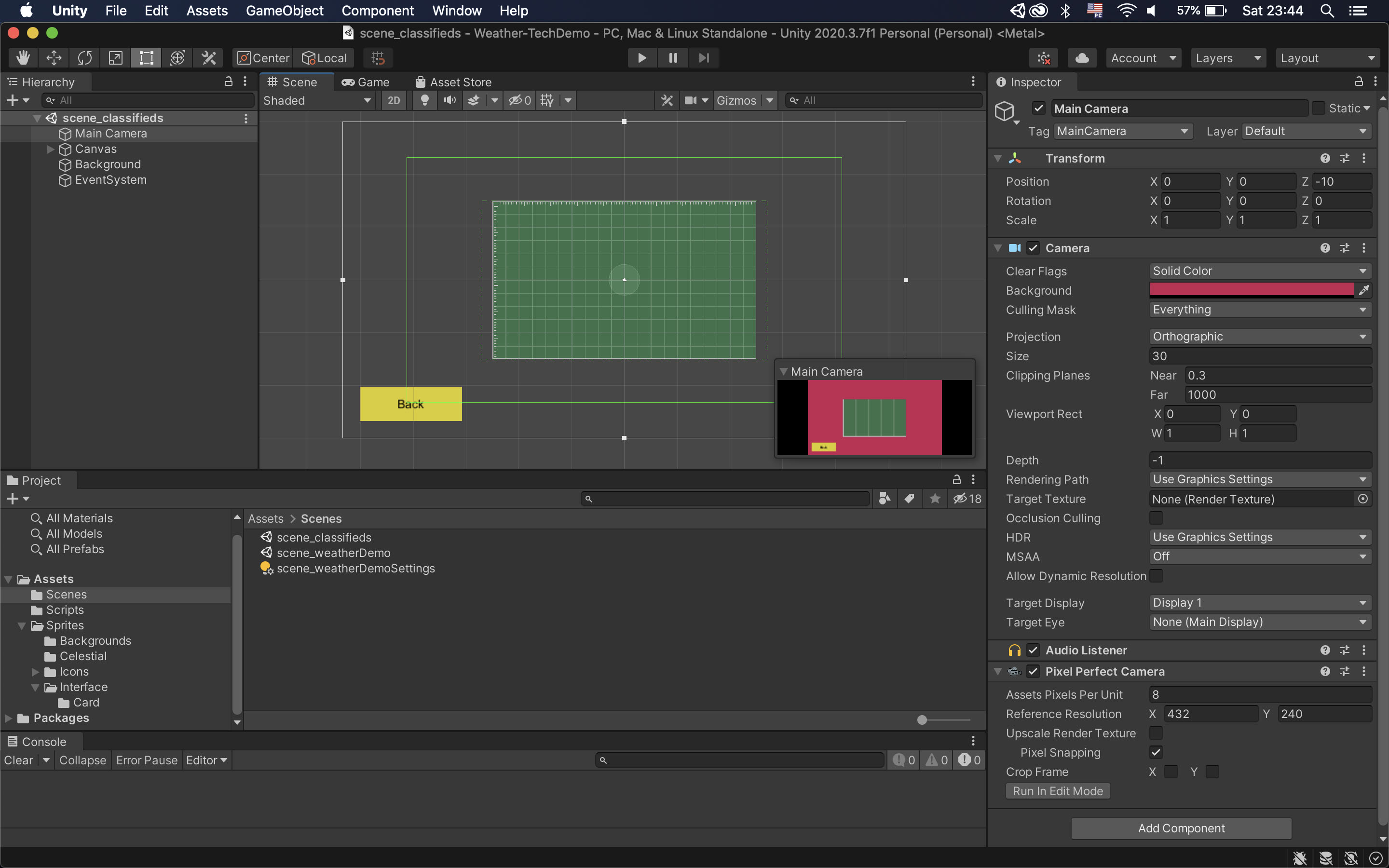 If I am correct, the dashed line of the camera is my target resolution, although it is weird as the green image I used as a background has a native resolution of 216 pixel vertical, yet it fills up the supposedly 240 pixel high camera. I have no idea what the solid green line is, and don’t even get me started of the canvas, whose render target is set for camera yet it is obviously many times bigger than that.

Can someone please explain it to me how to properly set up a 2D environment described in my opening, point out my mistakes, point me to a good tutorial, or just give me advice on how to understand Unity’s resolution management?

Because of supporting offline clients I unfortunately have to replace some of my integer Primary Key’s for UUID’s (but not necessarily the 128-bit RFC 4122 version). I’m on Postgres 12 (could upgrade to 13, but there seems nothing in the changelog related to this). What would be the best performing option? I have some thoughts written below. Any insights/answers?

To improve overall performance, I am assuming that shorter is better for the PK.

As I have a degree of control over the application, for example there cannot be more than one ID per second, I can have a key that is shorter than the typical UUID, which I think is pretty long.

I have been informing myself on Postgres PK’s, and learned that they are B-Tree’s, and may (if I understand it correctly) benefit from monotonically increasing values.

I’m thinking of making a Base36 key composed of three parts:

The resulting key will thus not be entirely monotonous, but still somewhat.

A key could look like for example: QO6AVO2N9C5O6AQT1 and could be saved as VARCHAR(17) or as BIGINT or BIGSERIAL. What would be more performant, and why? I read different opinions on it on various blogs…

Alternatively, I could use the CUID provided by https://www.npmjs.com/package/cuid. Also a Base36, but it is slightly larger, but has the same level of monotony. Allegedly there are DB’s that use that package for there native ID generation.

A benefit of UUID’s is that they cannot be guessed. My application has no need of that.

The Evoker in Volo’s is a CR 9 and I just can’t figure out how to calculate it up to that level.

So the best I can get is CR 6 w/o Stoneskin and a CR 7 with Stoneskin.

Not sure how to boost it to a CR 9 in my studies. Was planning on making a slightly stronger Evoker but trying to get the baseline down.

Checking over a battle with a caster versus an arcane archer/rogue. The caster, a bard, in this case, casts invisibility on themself. The archer still takes aim and hits with an advantage.

So my question is, does it make sense for the arcane archer/rogue to use their bonus action for aiming against an invisible target and still gain advantage to their initial attack roll?

Just seems a little funky to me that it was allowed because it doesn’t seem to make a whole lot of sense in the first place; at least not without a good perception roll…

So let’s say someone received a passive-aggressive notification and phone call from their ISP, and they decided to start locking down their network traffic, because like a dummy, they didn’t do that, before.

Thinking about such a "hypothetical" situation got me thinking about connection transparency, so I started testing.

Starting at the Computer level, NordVPN gets installed. But according to the experts who know a lot better, a VPN isn’t good enough.

So going to the router’s IPv4 network settings, the default DNS is changed from the ISPs default DNS (which would have been clearly listed there on the router page), over to Cloudfare’s 1.1.1.1 and 1.0.0.1.

But does that make sense to do that?

As I was thinking about this setup, I wondered if it made sense to set the VPN at the router level, too (supports OpenVPN), but figured it would be easier (for a novice who doesn’t want to mess up router settings) to install the VPN’s provided software, instead.

As I browsed through Firefox add-ons, I noticed some that provide proxy support.

As I tested this thing on ipleak.net, it displayed back a DNS from a Cloudfare server, it showed an IP address from the country where the NordVPN connection was being served from, and it recognized that a proxy was being used (which it threw in with "Your IP addresses").

And WebRTC has been disabled in "about:config" with "media.peerconnection.enabled = false". HTTPS Everywhere and Privacy Badger are enabled, Tracking Protection is set to Strict, Do Not Track is on; DRM, search suggestions, accessibility, studies and reports are all off.

Oh, and even with all that, would it make sense to employ the "internet villain" DoH too, or would that overwrite other settings I’ve already set up? Or would it do nothing, since Mozilla employs Cloudfare for its DoH, anyway?

This post may be too convoluted and mucked up compared to other questions on StackExchange, but I assume most of you know better than I do.

I have learned that:

Language for “Network racing game record” with below record instances:

So I wanted to create a new adventure hook I could use over many campaigns and figured, “Hmm, most medieval settings would have bounty boards set up in towns, offer prices for people willing to go out and deal with local problems”. Sooo I got out my Monster Manuel and Dungeon Masters Guide, and 2 hours searching online, and here’s my actual problem.

When sorted via challenge rating (DMG pg 136) monsters have their value set via the 5 different currencies which you roll to the d100 to determine which currency you reward players with. However, lets use Goblins (MM pg 165) and Kenku (MM pg 194)as the example. Both are CR 1/4, which places them on the Individual Treasure: Challenge 0-4. However, common sense would tell me the following:

Assume a town has a problem with Kenku and Goblins.

Kenku are known for their greed and will do anything to possess pretty things. While many beg, others steal or commit other crimes to earn such possessions. When you defeat a Kenku, it is logical to find gems, coins and possibly art objects in some form in its home whatever place it may be.

Goblins on the other hand are also motivated by greed, however their tendencies towards forming large groups or smaller packs prevents any 1 goblin from achieving a large amount for himself. However they have a tendency of training animals such as rats and wolves (or sometimes a Worg).

While a Kenku or even a group of kenku can cause quite the problem in a town, if there is a goblin problem, the town will often rather have the goblins taken care of over the Kenku. As such, on a Bounty Board a pair of goblin ears as proof would be worth more than a Kenku Beak as proof, despite them both being the same CR and belong to the same treasure Table.

So how can I make the Bounty Board both fair to the CR and make sense with the D&D Lore?