Players got themselves into a diplomatic problem that they know is probably above their pay grade in terms of difficulty. They spent a session trying to figure out this problem with talking to people, and rolling different charisma checks in order to try to persuade people they probably had no business persuading (rolls were average, arguments weren’t extremely compelling). The party didn’t plan any grand schemes, any extraordinary strategies, no clever ideas on the spot, but rather tried very basic head first dialogue.

This has happened in the past in regards to combat, and the party has with a recent deadly encounter had to think out of the box more (one player even said: “guys we need to plan more and think less about just hacking and slashing sometimes”). Now it’s a more diplomatic problem that doesn’t seem as easy as rolling a single charisma check and hoping it works out.

In the end, the party did not manage to solve the diplomatic problem (although there is room in the future for them to try again with the upper hand), and one of the players said they did not enjoy the session. Player enjoyment is my top priority. But I also think dnd is best when there’s risk, when you can fail rolls, when the PCs don’t always win (not that I actively seek this out though).

How can I get the party to perform less linearly in dialogue-related problems?

P: If trying to out smart a bad person with a lot of influence in the town

A: There are options for framing the person, bribing people, seeking dirt on this person to find their weakness, tarnishing their reputation, trying to prove their wrong doing by seeking out evidence, and a bunch of other possibilities.

I’ve tried to have a brief session-0 talk again about if they want dialogue-related problems handicapped, and they didn’t seem to take to that, but rather felt like they tried everything and didn’t know what else to do. I also did a postmortem on this problem and tried to give different options they could have tried, but I get a feeling the players feel like they still tried everything and failed and the session was “a waste” (even though they still got exp, still got some loot, and got some more plot).

Kind of at a loss of how to tackle this issue that isn’t just: “Go watch some dnd podcasts to get ideas, or go read X, Y, and Z resource on the subject”.

Hi, GSA people.
I recently purchased CapMonster.
I did notice that fairly quickly, a lot of messages were “blacked IP.”
Does use of this service burn out my proxies?
Does using an API-based service do the same?
Thanks.

I want to run a program on a vps, which uses my api key for doing financial transactions. I don’t want there to be any chance the host owning the vps or any other hacker to ever be able to see my api key. Is there a way to make this impossible.

The game of Pentomino is a tiling puzzle game played on a grid. A Pentomino piece is a two dimensional shape of five non-diagonally connected tiles. There are exactly 12 unique pieces (ignoring rotation/reflection). The goal of the game is to fill the board with the available pieces without overlapping. 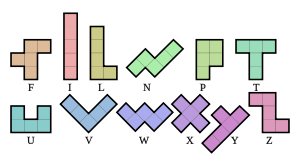 Filling such a board is, of course, trivial when using the same piece twice.

However, it seems impossible to do when using two different pieces. Is this true? How could this be proved?

This is not the case for larger boards or larger pieces (more than 5 tiles). Of course, the standard 6×10 board using 12 Pentomino pieces is also a counter example when using more than two pieces. Small counter examples:

I am attempting to understand the format for this Salted SHA1 hash for an assignment. The line of text I was given was:

I got numerous errors (Separator unmatched, Token length exception) when I tried running Hashcat on the string of text with the following arguments:

Any tips on how to sift through the jargon and find the format for the Salted SHA1 hash?

I want to solve the following using master theorem.

But I guess this isn’t correct, according to this master theorem calculator tool I used to check my answer https://www.nayuki.io/page/master-theorem-solver-javascript

The problem is to solve this using Master Theorem :

My attempt: I said that master theorem does not apply because the ratio of $ f/g = [\log_2 {n}]^4$ . This has no polynomial factor. But, when I looked at similar problems online, I saw some people apply case #2 here.

The version of the Master Theorem we use is as follows: