The 9th level spell Imprisonment can be cast a few different ways. One possible cast-version creates ‘chains’ that keep the target restrained:

You create a magical restraint to hold a creature that you can see within range. The target must succeed on a Wisdom saving throw or be bound by the spell; if it succeeds, it is immune to this spell if you cast it again. While affected by this spell, the creature doesn’t need to breathe, eat, or drink, and it doesn’t age. Divination spells can’t locate or perceive the target.

Chaining. Heavy chains, firmly rooted in the ground, hold the target in place. The target is restrained until the spell ends, and it can’t move or be moved by any means until then. The special component for this version of the spell is a fine chain of precious metal.

Note that these special Imprisonment-Chains are firmly rooted in the ground (R.A.W. / above). Here are my variants on one concern, below:

I admit that this question isn’t deeply serious. Still, i am darn curious where these crazy chains would end up going.

At 9th level, you gain the ability to move along vertical surfaces and across liquids on your turn without falling during the move.

I am looking for an answer based in the rules as written, although interpretations and opinions are welcome.

I assert the rules support a notion of turns as meta-constructs useful for examining the game world at intervals, as opposed to a game world law of nature. As an example, if a character jumps and “runs out” of jump at the end of their turn while still jumping, I view the character as ending their round in mid-air, and that the jump gets continued on the character’s next turn. I don’t actually have rules citations to support my assertion, unfortunately.

This is important because I think it affects how far the monk can move along vertical or liquid surfaces. I don’t know how, though.

A slightly different example. Let’s assume the monk has 30′ of movement and is at the edge of a 1000′ wide body of water. How far can the monk move before falling in?

One answer might be the monk can move its movement, then it is no longer able to stay above the water and gets dunked. If this is the case, can the monk get back up on the water and keep moving?

One perhaps unintuitive answer is that there is actually no limit on how far the monk can move without falling, which means the monk could move across liquid until the monk needs to stop for some reason, say exhaustion, then they fall in.

Not to be absurd, but in this case, I think the monk could “ice” skate on the water, and do swirls and tricks and stuff. Okay, yes, that’s actually absurd.

To summarize: how far can a 9th level monk move along a vertical surfaces and across liquids without falling?

So I am new to Mathematica and I will probably express myself badly, please let me know if I should specify the problem better.

I have the following constraints over the list {a,b,c,d}:

So that effectively I have {f[c,d],g[c,d],c,d} and I would like to plot this in a 3D+Color graph, with possibly one of the functions as color. I tried various combinations of Table and ListDensityPlot3D but I wasn’t able to reach anything (apart from a sparsely colored cube).

Moreover, I have a second surface {f2[c,d], g2[c,d],c,d}, is it possible to plot the two together and possibly find intersection points?

Thanks for the help.

Last session, my Arcane Trickster was faced with some murky water and we needed to know how deep the bottom was. I decided to use mage hand to try to locate the bottom of the water without putting my own hand in there, but then we were stuck with the question: would my mage hand just float straight through the bottom?

Another way of wording this question would be “does mage hand go through walls”?

A spectral, floating hand appears at a point you choose within range.

But exactly what the hand is is not described any further. Does spectral mean “float through walls” like an incorporeal ghost, or is it spectral only in the sense that it’s not a creature or an object? Either way, if the caster sent the hand through a wall or the floor, would it go through or just bump up against the wall?

I solved a set of cubic polynomials and got a set of discrete points for plotting a 3D surface. Using ListPlot3D, I got the surface; but somehow, the plot has extra and undesirable surfaces towards the end of the ‘time’ variable domain. I checked out the code, and the points generated; but could not find any reason as to why these extra surfaces were getting generated. I tried limiting the time domain, but the surface still shows up with the same problems.

I then separately plotted 2D graphs versus the ‘x’ variable domain and another one versus the ‘t’ variable domain. The variation of the dependent variable ‘Gamma33’ is almost a constant with time. This should obviously mean that the 3D surface should only be an extension of the first plot ( Gamma33 vs x) along the time domain. But what I get as the surface shows a difference, which I cannot understand.

Is it a problem with my code or the way I have complied the points generated? I’ve been stuck with this problem for a few days now; so it would be of great help if you guys could help me correct my errors.

P.S.: I’m just getting started on Mathematica, so please do forgive any of my mistakes you come across. It would be of great help if you’d come out to correct me. 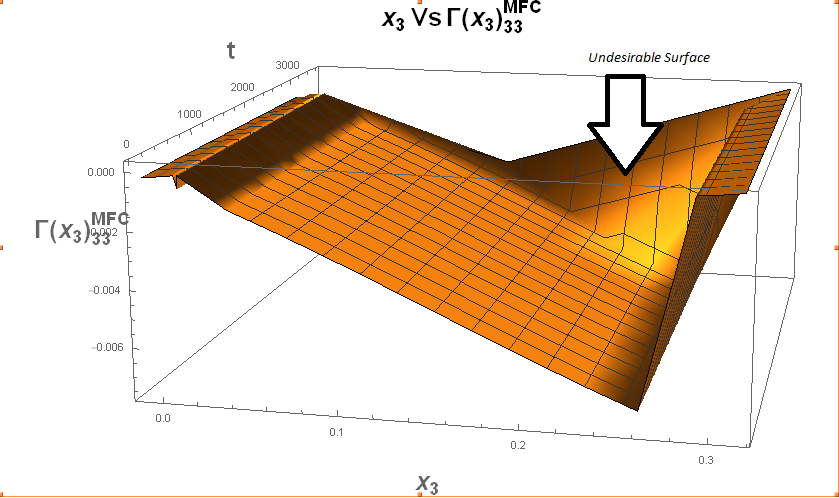 We have a rather conventional set up to start with:

We also allow screen recording, so we have another pair of cameras, but with different depths: 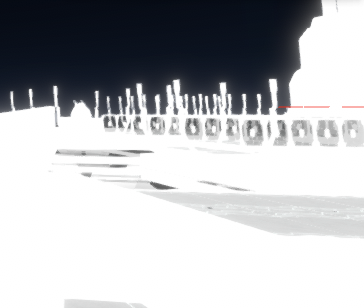 We have fiddled a bunch, and results are very peculiar:

It appears that deferred cameras are all sorts of janky now, especially in Unity 2019. Supposedly they have made a whole new ways to layer cameras for a future version of 2019. We wanted to upgrade to 2019.2, unfortunately, 2019 seems to have a slew of issues from rendering to DLL management, and we were unable to upgrade due those issues. 2019.2 wouldn’t have helped us in this issue anyway, because the new layer cameras functionality isn’t live yet.

We are using deferred because we have a lot of lighting effects, and deferred helps frame rate a lot in that regard. Giving up on deferred rendering is unlikely an option.

I am trying to figure out an algorithm to determine if the planes detected by a depth sensor can be said to be part of the same 3d object.

I was reading a paper “Plane-Based Optimization of Geometry and Texture for RGB-D Reconstruction of Indoor Scenes” by C. Wang and X. Guo where they where they present a novel approach of adaptive planes. They essentially use 3 conditions: 1. Angle between two plane normals are small: 2. Average distance between two planes is small: 3. Angle between the ray connecting two plane centers and each plane normal is as close as possible to 90◦

I have com up with the following two conditions: 1. The normals for the two planes should be perpendicular to each other. (I am making an assumption here that the 3D object is a cuboid). 2. Average distance between two planes is small. (from the paper)

What other conditions could be necessary and sufficient to conclude this? Any other research papers or documentation for this would greatly help. 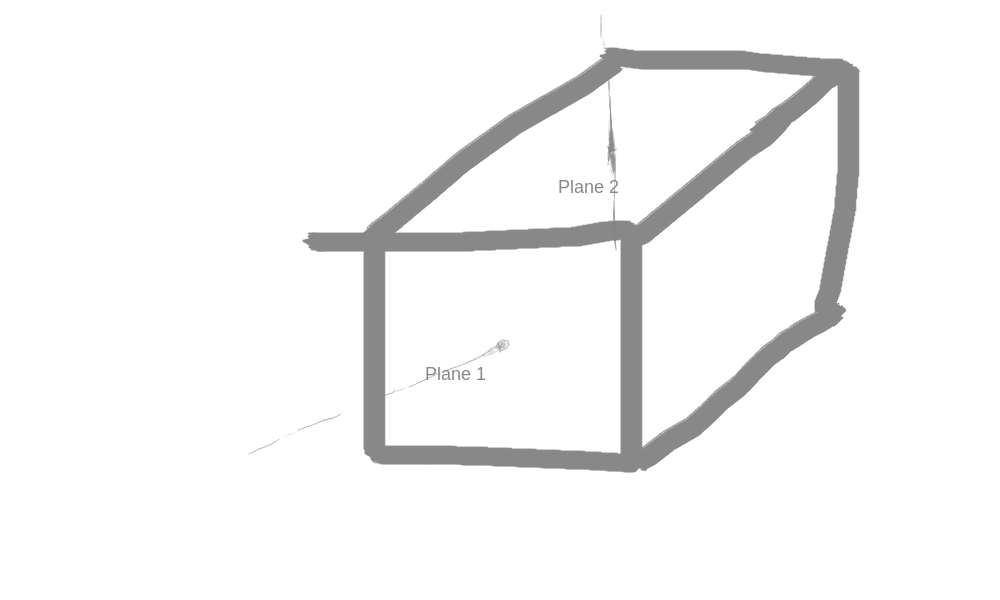 It is easy to prove that the statement holds true when $ \Sigma$ is a plane or a sphere and that its higher dimensional analogy for curves lying on hyperplanes or hyperspheres in spaces of dimension strictly larger that 3 is false.

So my first question is the following. The answer is probably NO according to above theorem!

According to this classification, and denoting the Euler number of a surface $ \mathcal{R}$ by $ \chi(\mathcal{R})$ , one can define the concept of genus $ g$ for an orientable or nonorientable surface as follows

Without boundary marked points, I think the Euler number is given by

So my first question is the following. The answer is probably NO according to above theorem!

According to this classification, and denoting the Euler number of a surface $ \mathcal{R}$ by $ \chi(\mathcal{R})$ , one can define the concept of genus $ g$ for an orientable or nonorientable surface as follows

Without boundary marked points, I think the Euler number is given by