A few playbook moves reference labels connected to playbook-specific features – for example the Protege’s Venting Frustration, allowing the character to roll the label their mentor denies to directly engage a threat while Angry.

When taken as a “take a move from another playbook” advance for a character who doesn’t have the playbook feature in question, how would you decide which label a character should use?

This is well into the realms of GM discretion and will often come down to the details of the specific character and move in question, but I’d like to know about people’s strategies and methods for making this sort of decision.

I’m new to DMing and I’m looking through options to throw at my players. I see the Zombie creature has the following trait:

Undead Fortitude. If damage reduces the zombie to 0 hit points, it must make a Constitution saving throw with a DC of 5 + the damage taken, unless the damage is radiant or from a critical hit. On a success, the zombie drops to 1 hit point instead.

My question is, do I set the DC to 5 + the damage that was rolled against it, or do I set it to 5 + the health it had before dropping to 0? I’ve not found any rulings on the matter.

How do you calculate the damage a PC takes when using shield block? The Shield Block feat allows you to reduce the damage from an incoming attack when you have your shield raised. The feat says (CRB, pg.266):

… Your shield prevents you from taking an amount of damage up to the shield’s Hardness. You and the shield each take any remaining damage …

Our table recently realized we had been running with two different interpretations of the emphasized text.

To illustrate, suppose 11 damage are being dealt to a character with a buckler raised (hardness of 3). The 11 damage are reduced by the shield’s hardness, resulting in 8 damage remaining.

One interpretation at our table is that the PC and the shield each take 8 damage. This seems like a straightforward reading of the feat, but resulted in a counter-intuitive outcome: significantly more damage is done when you use shield block than if you don’t.

The other is that the PC and shield split the 8 damage, with each taking 4. The consensus here is that damage dealt is a resource of some kind – there is only 8 damage to be applied, no matter how it is allocated.

Note: This question has been answered for D&D 4e, but I’m asking if this also works in D&D 3.5 since the systems tend to differ significantly over different editions. ( Does a Double Weapon work with Two-weapon feats? )

So can a Two-weapon feat be used with a double weapon in 3.5? Same question also goes for the feat “Ambidexterity”.

I am SQL server dba and came across weird scenario our cluster which had 10 nodes 5 primary 5 secondary each nodes had SQL role…. example Ams1pd11 to Ams1pd15 are primary.. and Ams3 side from pd11 to of 15 was secondary… in this scenario whole cluster behaved abnormally going 2 nodes down and all nodes availability groups were inaccessible leading to multicustomer outage.

Explanation of the real-time scenario as it started when I was in shift….

Ams1pd12 got down which was hosting primary server A So automatically the role A was failed over on best possible node and he choose Ams1pd11.

But Ams1pd11 already had one role on it e.g B Now Ams1pd11 was hosting both A and B as Ams1pd12 got down

As both primary roles were on one node it was a risk so to balance I failed over B node to one of secondary node Ams3 side.. now it was balanced and I was just about to investigate on Ams1pd12 why it got down and all…

So now 2 nodes out of 10 were down and one role was stuck so the customers on that role were impacted….

We were troubleshooting with Microsoft for same and noticed that other nodes were showing up by the availability group for alll the nodes were stuck and they were not opening and stucked in expanding state….

So this way all the nodes on that cluster were impacted and as due to this our backups stopped.. There was data loss…

The one stucked role and customer on that node faced only 15 mins data loss as the service was down fr us and them too at the same time, but

So if issue started and backup stopped at 7 am most of the customers were able to access the database till 6pm so there was 11 hours of data loss….

And it took lot of efforts to restore databases manually… Those online nodes were easy to recover as we just had to attach the dbs as we migrated data and log files bt for stucked role databases we had to manually recover them.

Please suggest the strategies which will be best to be followed in this type of disaster how we can obtain speedy recovery.

However, the Juggernaut Master Class from the core book and the Master of Darkness Expert Class from Tombs of Desolation both have a talent where incoming damage is halved, though under different circumstances.

My question is, assuming a character has both these talents and meets the specific circumstances for each one, how do they interact? Do you half damage and then half again afterwards, or do they achieve an identical effect and therefore having one makes the other obsolete?

I’m designing an internal tool that enables my coworkers to curate post-op care plans for orthopedic patients on our platform (basically sending educational content to users at specific intervals).

I’m running into a challenge with one of the main flows, which is adding exercise videos to a care plans. Right now, on the main care plan page, you click an “Add Exercise” CTA that opens up a modal (shown here) where the user is able to multi-select the exercises to be added. Cool.

BUT a dictated requirement was that the user should also be able to create a totally new exercise from the same modal (see arrow). This makes sense in terms of supporting the user’s workflow, but I’m stuck on the ensuing flow; like, I know that clicking “Create New Exercise” will flip the user over to the “Create New Exercise” page where they can build that content – but after the user creates the new exercise and clicks save, what does the user return to? Do they return to the original page with the still-open modal that now has a little “Exercise Created” confirmation message?

I honestly think this supports the user’s goals best, but is it strange/bad ux that the user comes back to the original page and the original modal is still open? Am I missing another, better, interaction entirely?

Thanks everyone, eager to hear what you think! 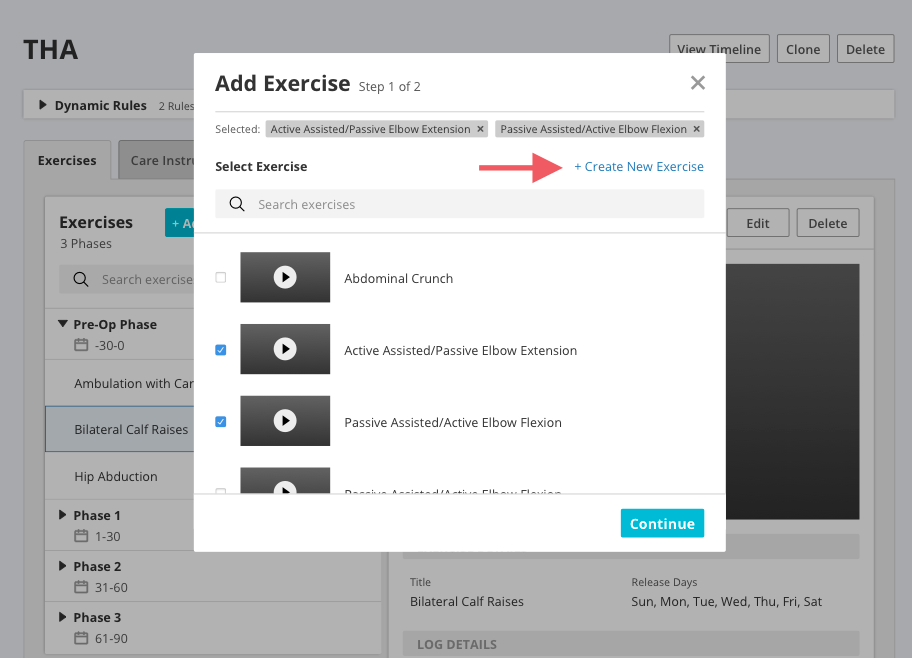 My confusion stems from the fact that most of the mechanics from the Ritual Caster feat seems to mirror the way a Wizard casts spells. Wizards are the only class that are specifically allowed to cast spells as a ritual without preparation by default. However, nothing in the feat actually describes that it works the same as Wizard ritual casting or different from it.

The mounted combat rules provide a few scenarios for falling off a mount:

If your mount is knocked prone, you can use your reaction to dismount it as it falls and land on your feet. Otherwise, you are dismounted and fall prone in a space within 5 feet it.

The rules for falling state:

A fall from a great height is one of the most common hazards facing an adventurer. At the end of a fall, a creature takes 1d6 bludgeoning damage for every 10 feet it fell, to a maximum of 20d6. The creature lands prone, unless it avoids taking damage from the fall.

In either circumstance of falling off your mount (falling prone, or using your reaction to land on your feet), do you take any damage from falling? Does it depend on the size of your mount?

Very related: It seems obvious that if you are on a flying mount at height, and fall off, you will take some damage – but the answer to the question above will probably determine where you measure the fall distance from in such a scenario (square above mount/top square of mount/bottom square of mount/square below mount).