Flippa is a website that lets sellers of domains and website list their properties for sale. They do not handle funds, escrow d0t com and/or paypal handles the sales. After taking my money for listing (250) I was able to sell my website. When it came to finish sale, told me that in order to proceed to escrow d0t com that I must: Upload selfie with my govt id, scan both sides of id, AND also do a "liveness video." I was a bit alarmed and looked in the their partner. They use a company that does KYC verification. Find it strange flippa, a non-financial company, is using KYC. Anyway the company they use claims to be based out of London. Which is is not true, their address in London is paid virtual business office. They are a Russian company, with russian founders and employees. No hate on Russia but as an American I am not comfortable uploading all this private info JUST to complete a website sale!

Is this even legal for Flippa to do? Flippa also says they store the information I sent them. I don’t like that they only ask me to complete this AFTER they have my money.

TL;DR A company that offers listing service for domains wants my selfie with my govt id. They use verification service that obscures that they’re based in Russia. Is this safe?

For passwords that are safe, but also memorable (since a forgetful user is also a risk), would ‘trails’ of keyboard keys be of any use? Like ‘asdf’ or ‘qwerty’, but maybe less common combinations, like ‘$ RFV’?

I am building a web application in which a third party library is used, which transforms the user input into JSON and sends it to an controller action. In this action, we serialize the input using the standard Microsoft serialize from the System.Text.Json namespace.

However currently, the json is rendered back to the page, within a script block and using @Html.Raw(), which raised an alarm with me, when I reviewed the code.

While testing if this creates an opening for script injection, I added

to the input. This input is transformed into

This look fine. Rendering this to the page does not result code execution, when I tested that.

So, is unicode character encoding really a good protection against script injection, or should I not rely on it?

Is it conceivable that unicode encoding is lost somewhere during processing? Like (de)serializing once more, etc?

This seems like a question that has been asked and answered before, but I couldn’t find it.

From time to time my LinkedIn connection gets marked as unsafe: no green lock next to the URL.

First, I believed this was a browser issue, but after I switched to another browser, the warning did not disappear (for now, my browsers are Opera and Chrome).

First, connection is always safe, but once I enter job search section and start scrawling through job offers, every now and then, although not often, the safe connection status turns into unsafe. Any one has an idea of what may cause such change?

Thanks for your attention. 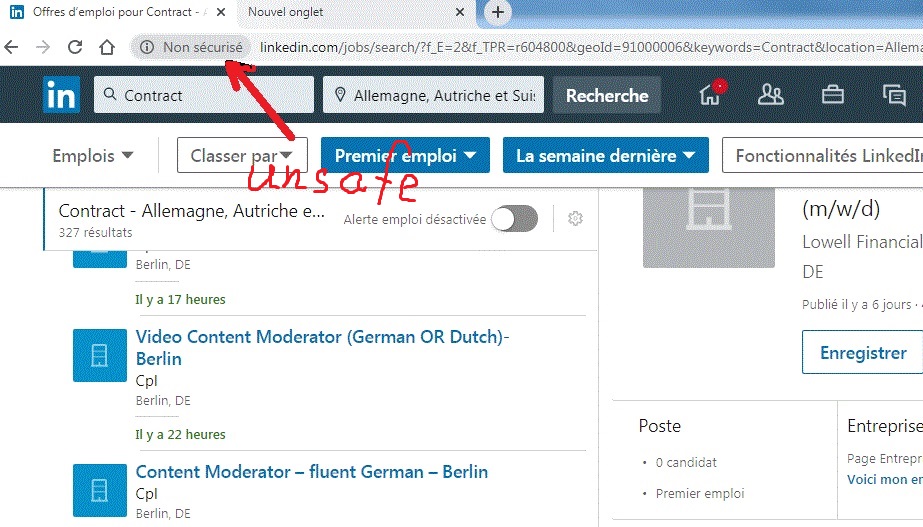 These days, we have pretty secure systems.
I have a mac with T2 security chip and the whole disk is encrypted via FileVault.
iPhones are known to be pretty secure, with even FBI having a hard time breaking in.
Windows machines can be encrypted with BitLocker or VeraCrypt.
With these kinds of systems, is it really that unsafe to store passwords in a text file? for an average individual user?
Of course if I’m operating a server or anything like that, I would definitely need better security. But I was wondering how much security does and average individual user really need?

For example, assume I get a NET::ERR_CERT_AUTHORITY_INVALID warning in Chrome, when visiting a website. If I still choose to visit that site, do cookies still get sent as usual (when the site is safe, no warning)?

The effect is that if an Android app requests an access token for a particular scope, and the requesting user has already granted approval to a web application in the same project for that same scope, the user will not be asked once again to approve. […]

This seems unsafe. The server-side app is able to do a more secure form of OAuth authorization, because it can protect its client secret. An Android app’s OAuth flow is less safe, since an attacker can always decompile the binary and steal any embedded tokens.

This is the scenario I’m worried about:

Am I misunderstanding something here?

Note: Recompile with -Xlint:unchecked for details.

I’m sorry if this isn’t the place to ask this, but there doesn’t seem to be a web security stack exchange site, so this looks like the closest thing to me. If there’s a better place to put this question please let me know.

I’m using Firefox on Ubuntu and I accidentally clicked an ad that took me to an obvious scam site. There’s no changed behavior on my computer, but just to be safe I’d like to know what you should do after visiting an unsafe site. Thanks