If a creature attempts to Dominate, deal save-or-suck psychic damage, or otherwise psychologically influence a PC, what do they know about the attempt? Both RAW and opinion answers acceptable, just specify what you’re giving.

Obviously the player themselves know when I ask "Make an x save".

But does the character know? Furthermore, what if it is a visible target. I don’t know if "Mind Blast" is visible, as an example, but ASSUMING it isn’t, say a PC angers a Mind Flayer, and they fail to deal damage to a PC because of a successful saving throw, does the PC know? "The Mind Flayer gives you an unsettling glare. Make an Intelligence saving throw. PC succeeds" Does the character itself know their mind was assailed in some capacity?

Lastly, suppose a PC is immune to a specific effect. I.e. being innately immune to Sleep effects.

Do they know if a creature attempted to use some magical ability to attempt to put them to sleep?

If you enter a new plane or return to the plane you were on when casting this spell, your body and possessions are transported along the silver cord, allowing you to re-enter your body as you enter the new plane. Your astral form is a separate incarnation. Any damage or other effects that apply to it have no effect on your physical body, nor do they persist when you return to it.

The highlighted text seems to suggest that, when you enter a new plane via astral projection, your body is transported there as well and you may re-enter your body. This suggests you have lost your astral form and are now physical.

However, DMG 47 implies something different. This section talks about the astral projection spell for the purposes of traveling in the Astral Plane.

Since the Outer Planes are as much spiritual states of being as they are physical places, this allows a character to manifest in an Outer Plane as if he or she had physically traveled there, but as in a dream.

It further goes on to saying that high level adventurers will often prefer to travel to the Outer Planes via astral projection because dying in this form doesn’t mean “real” death.

Thank you, for all of your input. My question is, I’m building a 3.5 Warforged Juggernaut, Psionic Monk. I want to make it permanently large, so I went with this method.

Jaws of Death (races of ebbron)

Does the addition of these components like the Arachnid Chassis and the Scorpion Brand increases his size permanently to large?

After taking 2-3 levels of Monk what would be the optimal level of taking either Psionic Warrior or Ardent to improve my Monk ability thru taking Tashalatora?

The character shall be built to epic levels and fully fleshed out in his other classes of Occult Slayer and Warforged Juggernaut. Do you think they synergize?

How many additional levels of Barbarian should I take to get the best out of the class as well as potentially trade in fast movement for lion totem barbarian?

Lastly, on the barbarian tip. How many levels of Frenzied Berserker should I add for the Berserker Goody’s?

Would you suggest putting Mummy Wraps on the Arachnid leg attack and the battlefist for an extra umph on its attacks, since it is immune to the effects itself?

Almost forgot, would the components be considered natural weapons since they are embedded? So that I could use them all?

Does the character need any levels of fighter for the feat tree?

Would it be better served by either using the Scorpion Brand by itself with it’s some what weak saves or using a Muag Stone Box in it’s place? So (three) boxes, two on it’s shoulders and one potentially on its tail for better effect, especially if the boxes have weapons enhancements on them?

This character has a Warforged Scout riding on his back inside of a Deep Crystal casing. His duties are to keep them going each day, i.e., fixtures, weapon upgrades, enhancements, battle help. So on and so forth.

A little more on the companion he’s an Psionic Artificer he’s constructed of the Psiforged body feat out of the book Magic of Ebbron. I particularly choose him because of his mental dominance over it’s subject. So that when he’s on a Berserker rage he could somewhat control it.

The character is a brawler using it’s full use of different charges and pins full attacks to accomplish it’s mission at hand.

Which enhancements defensively and offensively would be best used?

The character will be used for an DND 3.5 open game.

The Diceware method of password generation is simple, secure and easy to use

Generally when one wants a to buy a SIM card, he’s generally asked his ID and the latter is photocopied in order to associate the related identity to the SIM, and then the asker is given the SIM and becomes its owner, but isn’t it a risk that the SIM shop worker could use that photocopy maliciously for other purposes, such as registering another SIM on that identity in order to commit a crime in name of that man? Isn’t there a law preventing this or some precautions that could be taken (or anything that we could ask to the SIM shop worker, such as giving us the photocopy in order to be sure)?

I’ve read that pre-shared keys (PSK’s) are symmetric keys shared in advance among the communicating parties but have found no explanation as to how the TLS client and server agree upon the value of the PSK. How this this done?

What is the benefit of re-entering the same email address? It’s not giving any additional information, or discouraging bots, so I really don’t get it…

We’re releasing a new feature which will be beta tested. We’re exploring ways in which we can collect feedback about the feature and one way was to surface a modal if the user decides to opt-out of the beta. At this point, we would display a modal, with 2 questions, both optional. 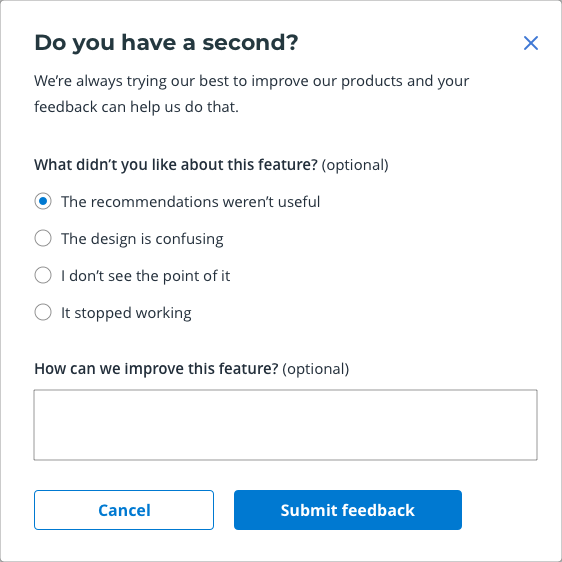 My question is, is it acceptable to surface a feedback modal at this point?, and should I include a third button which would allow the user to exit the beta without giving feedback?

We need a logo for our new Pro fitness gear company, IB Fitt. Contest entries will be accepted until 10/15 COB.

The winner will be selected by 10/16 and will get paid by PayPal.

High Resolution PSD or AI files will be required for the winning logo.

Post your entries as replies to this contest post or send to me by PM if you prefer.

Does anybody know a way of showing days past on view (rendering of a page), since the day an item was created.

I need this number for other calculations, to color format some usefull output.

I see a lot of example, mainly telling that [today] / today() can’t be used for that in calculated columns, some work around that require the item to be modified, but that’s not what i want, i like to show, when items are not modified. and people are late to respond i need to show that.

–update– This problem seams a bit more complex then i originally thought. As i wrote i want to see how long it takes before people respond. There’s a status(text) and modified(date) column, once text changes to it should stop counting, and preferably another column starts to counting between status assigned and status closed. (modified date might not be the best indicator for this is the status column, as modified might not always work(people need to have opened it). FYI there is also another column with a closed date, and closed is a status as well, so closed date could be retrieved from it.

So i think i should do some kind of server side powershell script, and schedule it to run each day at 00:01 (not the best option perhaps but right now i dont know other solutions to this).