can you help me understand some questions about Veracrypt:

I downloaded Veracrypt from the official site, installed it following different tutorials, but every single time just the command line is installed, the wizard that was suppose to appear never appears.

If I have a Veracrypt container, and I use a key file with a password, if the key file is too simplistic, is it possible to recreate that key file and open the container?

Suppose if I use a .jpg of a simple image, can an attacker open up MS Paint (or a similar program), and recreate the image, and use it with the password to open the container, or would they need direct access to the original image?

I forgot first five letters of the 11 letters long password of my veracrypt encrpted file (hidden). I was searching for a way to brute force veracrypt file and came across this python project. Using this python script as a guide I wrote this code.

The problem is whenever I execute this script I am getting this pop up error.

–non-interactive is only supported in text mode

How can I use python to brute force veracrypt?

Is it possible to detect the hash algorithm used to encrypt a file or partition with Veracrypt?

I’m researching ways to make the best encryption setup? What are thoughts on using TPM/Bitlocker or T2/Bitlocker native encryptions to fully encrypt a secondary drive, and then utilize Veracrypt to encrypt the disk and mount it? The boot drive would be TPM/T2 system encrypted with a PIN & password, with the secondary drives “automatically unlocked”.

Or is this all pointless beyond a single pass? It just seems the secondary drives don’t benefit from TPM/T2, so that negates the PIN and leaves just the OS defined password. In this method, they would have to decrypt the drive, and then still be left with another encrypted drive. Or should it perhaps be a container within the encrypted drive?

Assumptions: The passwords are all lengthy and secure, and both different.

I’m a layman in security and was trying to understand roughly how does Hashes and Encryption Algorithms are used in Veracrypt/Truecrypt.

Reading the documentation, that’s what I understood (please, feel free to correct me if I’m wrong):

For simplification’s sake, let’s consider a non-system volume, no hidden volumes and no Cascade.

An encrypted HEADER is generated containing two Master Keys (Primary and Secondary). Those Master Keys were created using RNG based on the HASH.

To Decrypt the HEADER, the correct password must generate a HEADER KEY (two keys, actually) using a derivation function from the selected HASH Algorithm. This HEADER KEY decrypts the HEADER. In other words, the HEADER is not the HASH itself from which the key is compared with.

If this is correct, I have some questions:

1- Is the encryption method of the HEADER the same of the rest of the volume? And only the keys are different…

2- If I got it correctly, the two HEADER Keys are 256 bit longer. Does those two combined key have the same power as a single 512 bits longer hash?

4- If yes for (2), does the subsequent two Master Keys also have 512 bit long equivalent power?

5- Does the subsequent two Master Keys also uses the same HASH algorithm that HEADER Keys uses? For instance, if I select Whirlpool algorithm in the wizard, does it only affects the HEADER KEY or both?

Thank you, very much for your time.

Before the formatting and extending the partition of E to D, I copied all data on the E drive to an external Western Digital 4TB drive but there was a 50 GB VeraCrypt file container on that drive ( E DRIVE ) which I marked as hidden from the windows explorer to prevent other users from deleting it. I forgot that there was that VeraCrypt file container on E drive and it didn’t copy to the External drive as it was hidden from the windows explorer.

Does making a 500 GB standard encrypted VeraCrypt drive on the D drive overwritten the D drive which has a size of 500 GB?

I also used Kerish Doctor to prevent that VeraCrypt file container from accidental deletion, today I found that 50 GB VeraCrypt file container on C:\ProgramData\Kerish Products\Kerish Doctor\Restore folder and I copied it to an external drive and successfully mounted the drive using VeraCrypt, but only 3 or 4 files out of 500 files are readable (They are mostly videos, photos)

The file extension that Kerish Doctor saved the file to prevent deletion is in .rst ON C:\ProgramData\Kerish Products\Kerish Doctor\Restore folder. 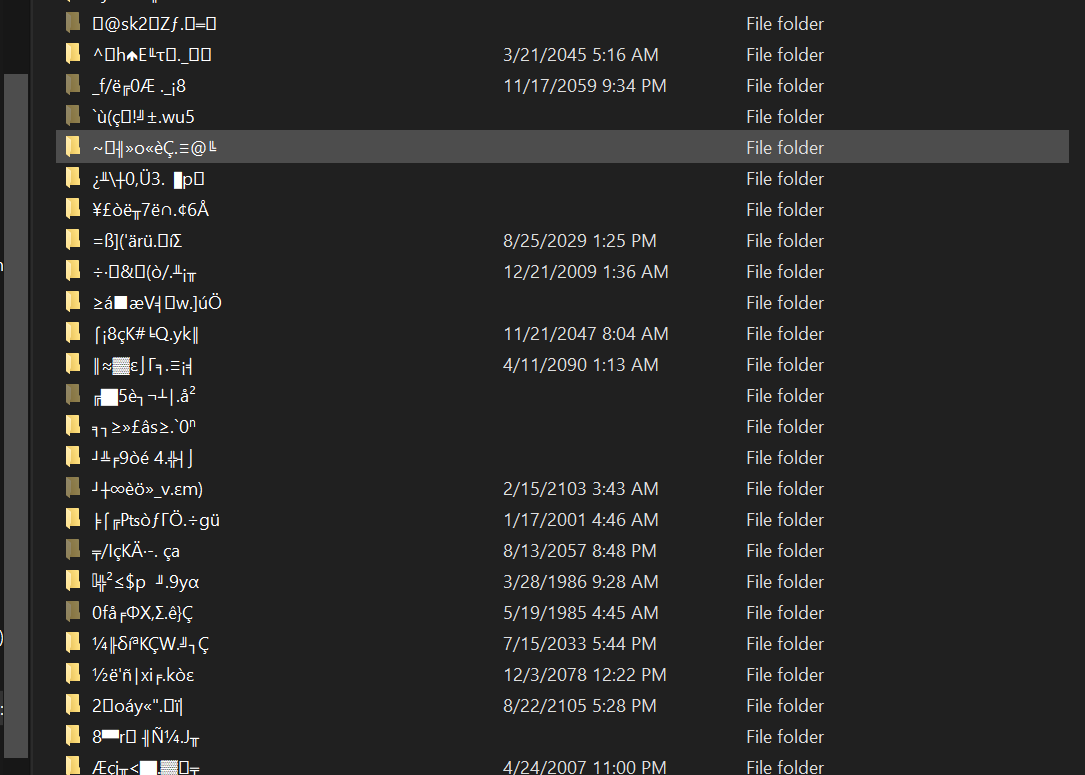 and opening any of those files gave me below error on the attached photo!

I have a mounted veracrypt container. As user, I have read/write permissions set up.

What have I done wrong with my setup?

I’ve got Kleopatra on the same machine for my GPG keys. Is there some interaction with that?