How to prove that if $ G$ is an acyclic transitive digraph, then the least independent sets into which all vertices of G can be divided is equal to the size of the longest paths to $ G$ ?

Let $ G=(V,E)$ be an undirected graph. given a pair of vertices $ s,t \in V$ , how can we construct a semi-streaming algorithm which determines is $ s$ and $ v$ are connected? Is there any way to construct such an algorithm which scans the input stream only once?

Note that a semi-streaming algorithm is presented an arbitrary order of the edges of $ G$ as a stream, and the algorithm can only access this input sequentially in the order it is given; it might process the input stream several times. The algorithm has a working memory consisting of $ O(n⋅polylogn)$ .

Given an undirected graph G(V,E), find the minimum number of vertices to remove so that the Edge Set of the graph becomes $ \phi$ .

In other words: If we remove one vertex we remove that vertex along with all edges connected to that vertex. Find the minimum number of vertices to remove so that there are no edges left in G after their removal.

I want to find a polynomial time algorithm that has graph $ G = (V, E)$ and integer $ k$ as input and returns a maximum set $ U \subseteq V$ with largest size such that all vertices of $ G[U]$ have degree at most $ k$ .

My idea with greedy algorithm that removes vertices with largest degree or vertices connected with most vertices with degree greater than $ k$ doesn’t work.

Does anyone know how to solve this problem in polynomial time?

I’ve identified a problem and a possible solution related to navmesh-based pathfinding. Before diving in, I’ll preface my post with some questions to keep in mind as you read:

For reference, I’m using images from http://jceipek.com/Olin-Coding-Tutorials/pathing.html#navigation-meshes and generally following the advice laid out there.

Decompose your walkable area into a navmesh, treating convex polygons as nodes and their borders as edges so that you can perform an A* search to get from point A to point B. To translate from “node ids” back to real points, use string-pulling.

Here’s a copy of the example space: 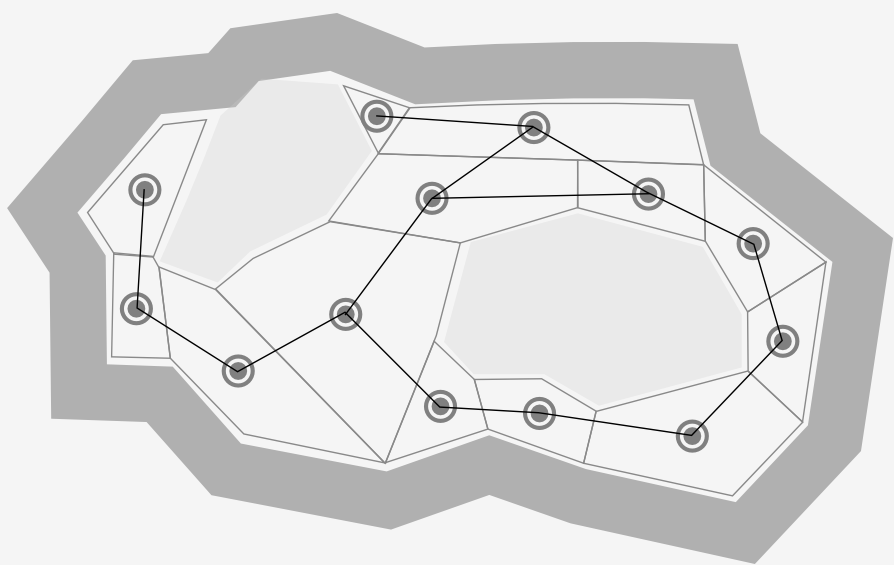 And an example generated path after performing string pulling: 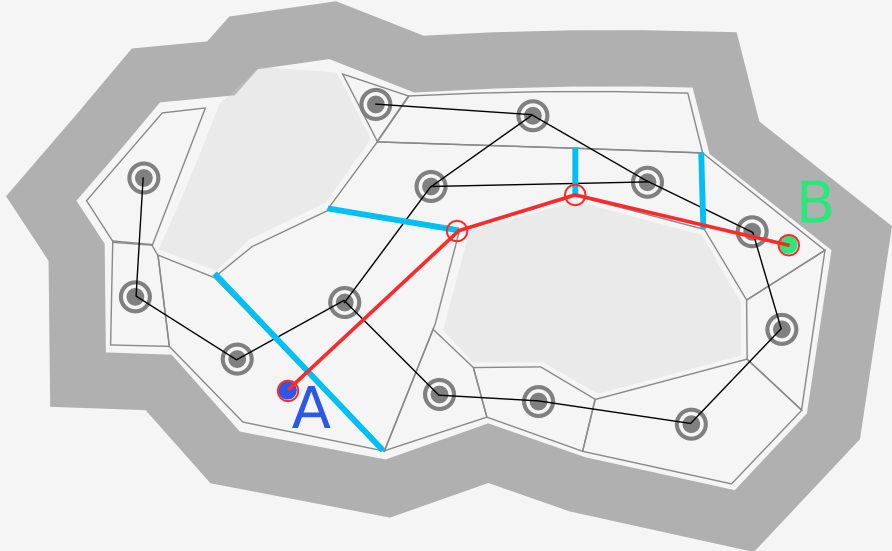 So far so good.

But I realized this approach generates an awkward path in a situation like this: 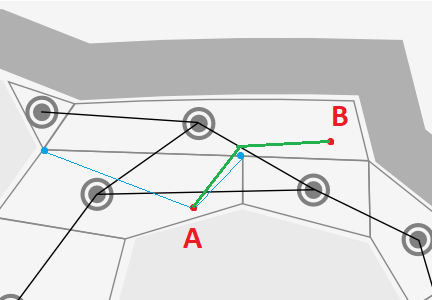 In this situation, a trio of nodes are all adjacent to each other, and so the A* will generally choose a path directly from the starting node to the ending node, despite an intuitive understanding that the agent can move in a straight line from A to B which travels through a different polygon.

I’ve been working on a solution to this problem and so far my best idea is to apply a transformation to the nav mesh. My description of this will be a little hazy as I’m making up terminology to describe the approach…

The result of this on the example above should result in this: 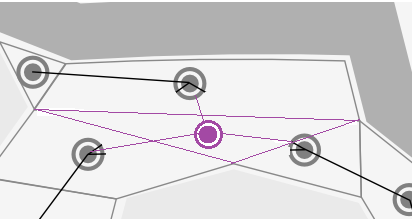 And with the same A-B path from before, the string-pulling should now result in a straight line: 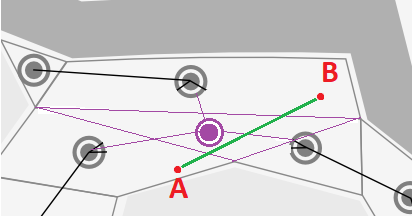 I believe that as long as the navmesh has no inner vertices, all paths generated with the approach described in the linked blog post should seem “natural” and not have any surprise corners in what seems like open space.

Per my questions at the beginning of this post, I’m looking for more information, e.g. has anybody else solved this problem before, is there a better way to do it, and is there even a name/term for this problem?

So a tournament is just a complete directed graph, I believe.

I’m having trouble proving this problem. I know it is induction however. I was thinking the base case is $ 2^1$ vertices, and therefore we have a sub-tournament of 1 + 1 vertices, which holds.

Then in our induction step we have to show $ 2^{n + 1}$ . But I’m not sure how to approach this. Any ideas would be extremely appreciated.

For Dijkstra’s,i can find shortest paths from source to all vertices in the given graph but how can i calling the algorithm |V| times taking each vertex as a source and store all tables ??? For example : What is the shortest path from 1 to 4? You need to print the value and the exact path vertices starting from 1 and ending at 4.

Implement Floyd’s Algorithm and Dijkstra’s algorithm using all vertices as sources to solve All- pairs shortest path problem. For Dijkstra’s, you need to call the algorithm |V| times taking each

with random edge weights from a file and store the graph information in an adjacency matrix. Then, you need to answer any query asking for the shortest path between any two input vertices. You need to print the path from Floyd’s and Dijkstra’s algorithms. Your program should ask the user for the name of the input file.