Dear administration who doesn't want to write back to me…

https://forums.digitalpoint.com/threads/xxxxx.2857360/
In accordance with the law on the protection of personal data of the European Union I DEMAND to delete this thread or the e-mail inside this thread.

Dear administration who doesn't want to write back to me…

https://forums.digitalpoint.com/threads/xxxxx.2857360/
In accordance with the law on the protection of personal data of the European Union I DEMAND to delete this thread or the e-mail inside this thread.

Our party found a large sailing ship (about 60 feet long) that we want to claim as our own. However, it is totally landlocked.

What spells or other methods are there to facilitate moving a very large object like this? Enlarge/Reduce is useful but only lasts 1 minute and probably even with the 1/8th weight reduction wouldn’t make the ship small enough for us to drag/carry. Levitate has a maximum weight of 500 lbs, so doesn’t help us here.

During a while of playing a 2e session with multiple 3.5e conversions, I have recently (In the past 7 years) experimenting with playing Evil campaigns and playing Monster characters such as Mind Flayers (Which I’m really good with), A Gloom (Part of an Epic Level beginning game), Baatezu, Trolls, Fairies, Sprites, Hunefers (Another Epic Level beginning Campaign), Bugbears, and a small hand full of other monsters. In this campaign, We have been going on for 2 years of gameplay, reaching levels between 64-76

I am having a slight problem trying to figure out how to keep this diverse group together. The blood war, the personal problems, and the ambitions in the group are causing us to be a bit nervous. Each of us is having a difficult time with personal goals. During our time we have battled the armies of heavens, slaughtered many baatezu/devils, plundered villages, battled against the forces of good, fought against the harpers including battles against Mystras chosen, and basically ravaged most planes. Now after a while of our power growing, some of us have become slightly more distant from others and others have become a little suspicious of each other, causing many to create secondary plans and safeguards just in case. I do not want this to grow out of control, for this campaign is too amazing to quit. I need a solution that does not involve a common enemy (for specific reasons) or involves money. So, how should I string together this merry band?

If you cast Polymorph on yourself to turn into a creature with low intelligence, can you/it continue to concentrate and thus remain in the polymorphed state for the duration of the spell? Or would the spell fail almost instantly because the new creature wouldn’t be able to concentrate?

The question arose from one of our players wanting to cast Polymorph on himself to turn himself into a Black Pudding (MM p.241). We all looked into the distance pensively.

The spell says it can transform to be a beast, so the “Black Pudding” would be out of the question, but some beasts have an Intelligence of 1, like the Black Pudding, for instance: a Lizard.

This spell transforms a creature that you can see within range into a new form. […] The transformation lasts for the duration, or until the target drops to 0 hit points or dies. The new form can be any beast whose challenge rating is equal to or less than the target’s (or the target’s level, if it doesn’t have a challenge rating). The target’s game statistics, including mental ability scores, are replaced by the statistics o f the chosen beast. It retains its alignment and personality. […] The creature is limited in the actions it can perform by the nature of its new form, and it can’t speak, cast spells, or take any other action that requires hands or speech.

I i were to provide a person with the single letter ”A” and a HMAC-SHA256 hash of this message (my secret key). Would the person be able to derive any information about my key or be able to forge the hash for the letter ”B”?

I would like to create a database to organize archived projects. Initially, I thought this could be accomplished by using google sheets or airtable. But it turns out my needs are a bit more complicated because of nested tables. I’m wondering if I need something like mySQL with a custom UI.

I have illustrations below of what the database could look like. What I need is the following:

Is this something that needs to be custom built, or is there a platform that could make this possible? Appreciate any help!

I’m designing a web app where the user adds predefined items from List A to a custom List B.
List A is over 100 items sorted alphabetically.
List B can be customized according to user needs.

I designed a drag-and-drop solution for the web app. The user can jump to List A items alphabetically by clicking a letter.

This drag-and-drop feature doesn’t work on tablets very well and is impossible for smartphones. So I designed a select form for mobile devices: When the user taps on a list item in List B, a picker/flipper populated with List A items is triggered. 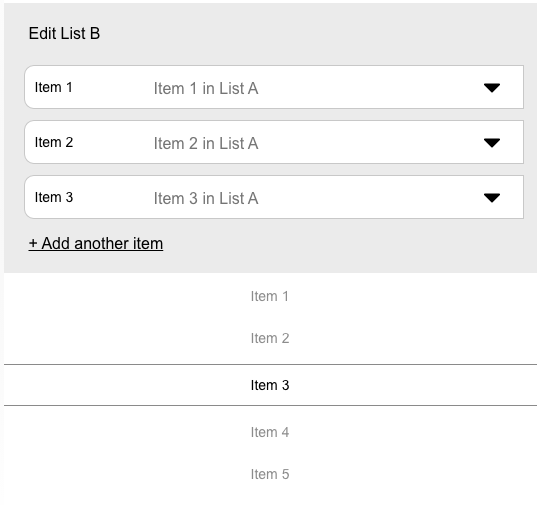 Is there a way to implement alphabetical filtering in a web app’s mobile interface?

How can the mobile interface for this feature solve the following requirements?

Traditionally the D&D party has been a Cleric, Fighter, Magic User and a Thief.