When casting Wall of Fire, “each creature within its area must make a Dexterity saving throw. On a failed save, a creature takes 5d8 fire damage, ar half as much damage on a successful save.”

Later in the spell description, it states “A creature takes the same damage when it enters the wall for the first time on a turn or ends its turn there.”

So when a player enters the wall, does he/she get to make a DEX save to avoid/reduce damage? Does that count as the “same damage?” i.e., damage under the same parameters?

I have to figure out the following question. Any help/suggestions would be appreciated.

Desired output for a 3 x 3 wall

We refer to the output above as a 3 x 3 wall – meaning it has a length of three bricks and a height of three bricks. Notice that the middle row is “offset,” beginning and ending with a “half brick.” Below are listed properties of a valid wall: • The rows are made up only of underscore ( ) and pipe (|) characters, • The bottommost row is never offset, • Each row above the bottom should alternate between being offset and normal, • The top of the wall is made up of underscores, expect for one space at the very beginning and end. 1 Tasks 1. Complete the method stub print wall one(). This should print out the given 3 x 3 wall as output, line by line. 2. Complete the method stub print wall two(). This also should print out the 3 x 3 wall; however, you should use variables to reduce the amount of code. 3. Complete the method stub print wall three(length, height). This should allow the user to print a wall of any given nonzero integer length and height. For example, see the 4 x 8 and 8 x 4 walls below. print_wall_three(4, 8)

The Wall of Water spell doesn’t specify whether the water is moving, only that it is difficult terrain. It is 1′ thick and thus may or may not qualify as a sufficient quantity of water to cause the vampire to be ‘in running water’ if he is restrained while in it.

So the question is, would holding a vampire in the area of a Wall of Water damage the vampire?

This question asks how PCs can break a stone wall. Aside from the usage of disintigrate to immediately destroy a wall, it seems that a wall can be destroyed by reducing it’s HP to 0. Walls have a hardness which reduces the damage done to them.

What is the lowest level at which a player character can destroy a wall in 1 round? Magical and mundane means are both in scope, and any item which the character has access to. Limit items to the character’s level or lower.

Our group has two different interpretations of Wind Wall.

A wall of strong wind rises from the ground at a point you choose within range. You can make the wall up to 50 feet long, 15 feet high, and 1 foot thick. You can shape the wall in any way you choose so long as it makes one continuous path along the ground.

Interpretation 1: The wall must be vertical, and the wind blows straight upward.

Interpretation 2: The wall can be angled or even curved, as long as the wind is blowing at some upward angle, even if it’s just a few degrees above horizontal. 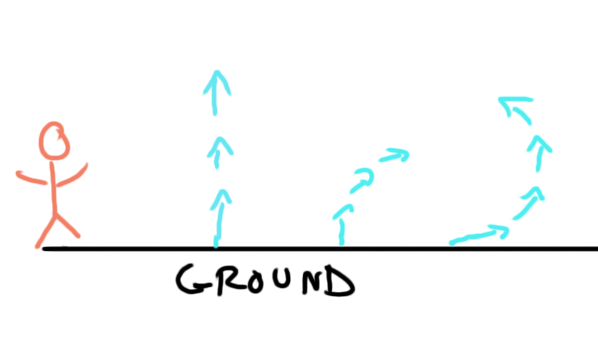 A while back, my Pathfinder (1st edition) group was discussing late-game possibilities. I, playing a monk, noted that at 16th level my fists counted as adamantine for the purposes of overcoming damage reduction – I could literally punch holes in mountains, given a bit of time. I was reconsidering this conversation today and I got to wondering – what is the most efficient human siege weapon we can create?

So here’s the challenge: We are faced with a standard castle wall, 10 feet thick and made of stone (Per 3 feet of wall thickness: AC 2, hardness 8, 540 HP, Burst DC 50). We want to create a 20-foot-wide hole in the wall, in order to create a breach wide enough for soldiers to attack through. Since a wizard would have no trouble with this, we will be disallowing all spells and spell-like abilities (including those cast through an item). We’ll also ignore any siege weapons, excluding the PC themself. Everything else is valid, as long as it is official/published – supernatural and exceptional abilities, feats, magic weapons, and so on. How can we accomplish this in as few combat rounds as possible?

An adventurer cast Wall of Force around a Lich, imprisoning them inside a 5ft hemisphere. The Lich, having Wall of Force prepared too and not fearing death, tries to cast it from inside the hemisphere on themself.

My group love to cast Wall of Force on my bosses, and it’s quite understandable. Preparing my next boss, I realized that I don’t know what would happen if someone tried to cast a Wall of Force while inside an enemy’s hemispheric Wall of Force.

If the wall cuts through a creature’s space when it appears, the creature is pushed to one side of the wall (your choice which side).

Nothing can physically pass through the wall.

I’m pretty sure the boss won’t clip1 through the Wall of Force but can the spell even be cast and, if so, what would happen? RAW answers are preferred.

1: a videogame term for an entity abusing the physic and hit-boxes to go through elements usually impassable

You create the image of an object, a creature, or some other visible phenomenon that is no larger than a 20-foot cube. The image appears at a spot that you can see within range and lasts for the duration. It seems completely real, including sounds, smells, and temperature appropriate to the thing depicted. You can’t create sufficient heat or cold to cause damage, a sound loud enough to deal thunder damage or deafen a creature, or a smell that might sicken a creature (like a troglodyte’s stench).

Physical interaction with the image reveals it to be an illusion, because things can pass through it. A creature that uses its action to examine the image can determine that it is an illusion with a successful Intelligence (Investigation) check against your spell save DC. If a creature discerns the illusion for what it is, the creature can see through the image, and its other sensory qualities become faint to the creature.

One of my players wants to cast this as a Wall of Fire. He asked me what would happen if an enemy shoots through it.

As noted in the bolded sentence, physical interaction with the image reveals it to be an illusion.

Arrows have no problem with getting through a normal Wall of Fire. Would this reveal the illusion?

The Wall of Force spell description says, “Breath weapons and spells cannot pass through a wall of force in either direction”. But what exactly does this mean ? Specifically,

I’m getting ready to DM a Forgotten Realms campaign against the Wall, but I’m not sure if I have all the information I could have.

This will be a sequel to the last campaign we had, where one of the characters managed to get most of the others interested in joining him in a crusade as soon as the preparations are complete; the player in question got the idea after playing a game called Mask of the Betrayer.

Now, I haven’t played this game but plan on watching a playthrough of it, but I’m wondering if there’s any more information in a book or a supplement or something that I could read; the more info I have on it the better prepared I’ll be.

This will be a D&D 3.5e campaign, so anything specific to 4e or later won’t be of use to me. Aside from that, though, anything you could find will be greatly appreciated.