There already exist a few questions asking similar things about such scenarios, like the following:

The first link above currently has an answer stating that the wording difference is important, and that it does result in differences between the features and rulings regarding them. Below are some example features:

If you drop to 0 hit points while you’re raging and don’t die outright, you can make a DC 10 Constitution saving throw. If you succeed, you drop to 1 hit point instead.

If damage reduces the creature to 0 hit points, it must make a Constitution saving throw […] On a success, the creature drops to 1 hit point instead.

When you are reduced to 0 hit points but not killed outright, you can drop to 1 instead.

You automatically revert if you fall unconscious, drop to 0 hit points, or die.

When you are reduced to 0 hit points, you can expend 1 ki point (no action required) to have 1 hit point instead.

If the boar takes 7 damage or less that would reduce it to 0 hit points, it is reduced to 1 hit point instead.

The first time the target would drop to 0 hit points as a result of taking damage, the target instead drops to 1 hit point, and the spell ends.

Only the last two features actually use the phrasing “would drop” and “would reduce” instead of simply “are dropped” and “are reduced” (or similar). Does this mean that death ward and the Relentless feature act differently in terms of rulings to be made?

I would like answers to assume that the wording choice of “if” vs “when” is irrelevant. These words (at least to me) seem to be used interchangeably throughout the rules with no difference in meaning, so they can be ignored here. Alternatively, if you feel they are different, that should be a separate question of its own.

I have a Flow which has the following trigger: 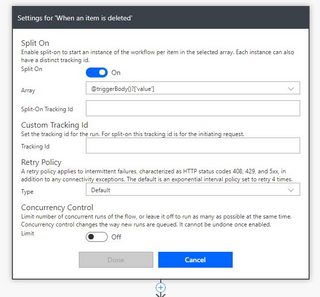 However, when I delete an Item from the associated list, the trigger doesn’t work as the list item gets deleted.

I can confirm this by placing a ‘Get item’ right after the trigger, and I get the following error:

This makes sense, as the list item has been deleted in SharePoint, so the trigger can’t ‘Get’ the item.

What I don’t get is:

Shouldn’t the item wait until the workflow is ‘approved’ before being deleted?

Steps already did: – I could get all working folders – Got the basic data files – Trained Nlu and Core – launched action server and command line – So here the expectation is User enters Input like ‘Hi or hello’ and then bot responds and continues the chat

On preliminary search over forums, seems it is a Python code issue, as I understand it try to get bot responses using ‘WITH’ keyword ?

Any pointers on how can I get it sorted please ? Thanks in advance, Venky

When form submision is done using admin_post in front end, then in action page header shows wordpress default header bar. How to avoid this header bar